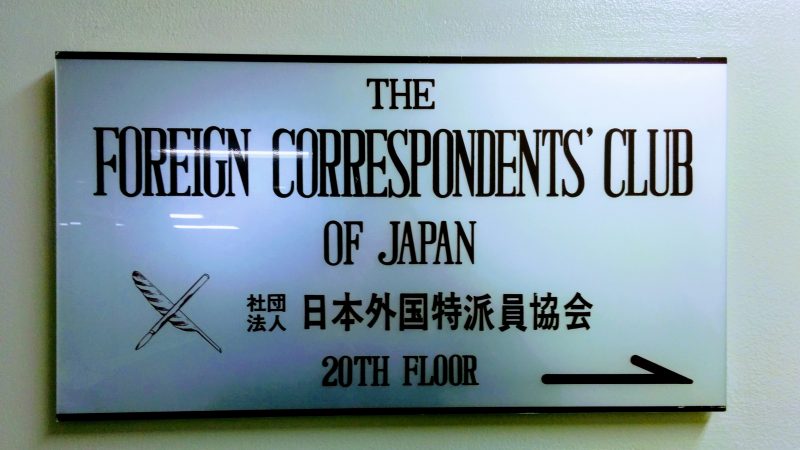 Foreign Correspondents Club of Japan sign at the organization's previous location in Yūrakuchō, Tokyo. The FCCJ has since moved to a new, more central location in the Marunouchi neighborhood of Tokyo, overlooking the Imperial Palace. Photo by Nevin Thompson.

The leadership of Japan's oldest press club for foreign journalists has been accused of censorship after an image parodying the Tokyo Olympics has been removed from the website of its monthly magazine. The president of the press club, who also sits on the Tokyo Olympics media committee, says it was merely a case of copyright infringement.

The cover of the April 2020 issue of Number 1 Shimbun, an in-house magazine for members of the Foreign Correspondents Club of Japan (FCCJ), and read mainly by journalists reporting on that country, featured an image of the Tokyo Olympic emblem depicted in the shape the novel coronavirus that causes COVID-19. 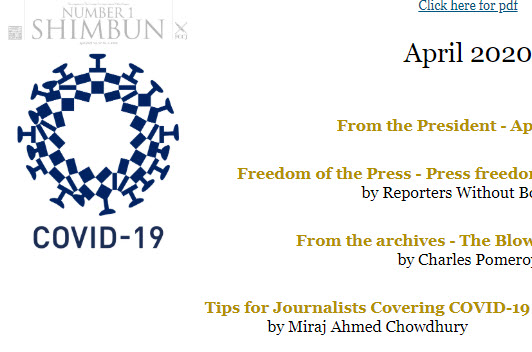 Former cover of the April 2020 issue of Number 1 Shimbun before the parody image was removed. Screencap from Internet Archive, saved on May 17.

After reportedly receiving complaints from the Tokyo Olympic Organising Committee that the cover image was “insensitive to athletes“ the president and other members of the board of the FCCJ decided, on May 21, to remove the image from Number 1 Shimbun's website.

Speaking on a press conference broadcasted on YouTube on May 21, FCCJ President Khaldon Azhari stated that the board's decision to remove the Number 1 Shimbun cover image from the website was because of copyright infringement.

“A lot of us at the FCCJ were very unhappy about the decision to remove the image,” said David McNeill, the former Japan correspondent for The Irish Times, British magazine The Economist and other publications, and a former editor of the Number 1 Shimbun, in an interview with Global Voices.

“Right up to the moment that FCCJ president Khaldon Azhari gave an online press conference on May 21 to explain the decision, there were people telling him not to do it, ” McNeill said.

The decision to remove the parody image was criticized on Twitter by a number of journalists, such as Tim Hornyak, who covers technology in Japan:

The board of the Foreign Correspondents Club of Japan decides to pull the cover of its April magazine, which parodies the 2020 Olympics logo as a coronavirus particle, after the Olympic committee called it offensive. This is freedom of expression in Japan @fccjapan pic.twitter.com/C48MHpn1QA

With a print circulation of just 1,000, the reach and the power of the FCCJ and the magazine are overestimated, McNeill said. “Now the current issue has become one of the most-read magazines and covers in the history of the Number 1 Shimbun,” he added.

Gearoid Reidy, who reports on Japan for Bloomberg, had a similar thought:

I mean, it’s likely I never would have seen this image if it wasn’t for the Tokyo 2020 complaint and *I’m a member of the FCCJ* https://t.co/s5UUUhy3Jf

Others took the issue more seriously. Following the removal of the image, several journalists condemned the decision in a statement that was published by Shingetsu News (SNA)'s Michael Penn, a former FCCJ vice-president and former board member:

[…] The undersigned journalists are appalled by the fact that the Club authorities did not meet their responsibility to defend freedom of the press, which was their most sacred duty. By their words and actions, they have undermined free expression in Japan and emboldened the enemies of democratic debate. […]

In an email interview with Global Voices, Khaldon Azhari said he “doesn't agree” that the take-down constituted an attack on freedom of expression. “I and my board repeatedly said in the FCCJ's 75-year history we have always stood as a beacon for the freedom of the press in Japan,” he said.

In email correspondence with Global Voices, Azhari confirmed what he had said in a May 21 YouTube press conference, that the FCCJ received a letter from the Tokyo Organising Committee that claimed that the magazine cover image was “clearly exploiting the design of the [official Tokyo Olympic Games] emblem” and was an “infringement of copyright.”

“In Japan, the law and rules on the copyrights (sic) are more strict than other countries,” said Azhari to Global Voices. “This is why we at the [FCCJ] board sent the case to our lawyers to give a legal consultation.”

“Some journalists in the club didn't buy this and considered the request to remove the design as an attack on the freedom of expression […],” said Azhari. “But the [Tokyo Olympic Committee]'s letter also said that to deliberately paint the emblem in a negative light by associating it with the COVID-19 virus, a serious threat that has resulted in thousands of deaths worldwide, is in direct opposition to the ideals of the Olympic movement.”

The Tokyo Olympic Organizing Committee lists Azhari as a member of the media commission on its website, which was perceived as a conflict of interest about the decision to pull the magazine cover. Azhari objected.

“I was surprised to know I am a member,” said Azhari. “There is (sic) no payment or privileges whatsoever from the Olympic committee for the [FCCJ] president.”

David McNeill suggested that there was no need for the FCCJ to immediately take down the image. Instead, McNeill said, the FCCJ could have promised to investigate the issue, which would have left more time for consultations with the membership.

“Still, I'm not on the board so I don't have to worry about being sued,” said McNeill. “The FCCJ doesn't have a lot of money to pay for legal costs.”

The lack of financial resources points to a bigger problem for the FCCJ, which was first established in 1945 following the end of the Second World War.

“The FCCJ needs to find a solution for its financial problems,” McNeill said. “The decision to acquiesce to the Tokyo Olympic Committee is a blow to the morale of the FCCJ and to its reputation, just when its membership, relevance and, in turn, revenues are declining.