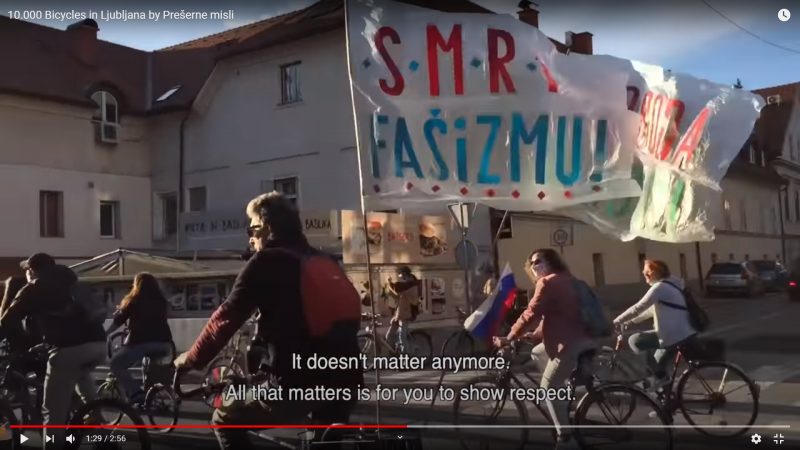 Slovenian bicycle protesters including a man with banners reading “Death to fascism” and “Freedom to the people.” Photo: Screencap from video by Bajk Štrajk/YouTube.

А Slovenian protest song with a mellow melody uncharacteristic of its genre has gone viral across the Balkans.

The song's authors describe it as:

Thousands of cyclists have been riding out weekly protests on the streets of the Slovenian capital, Ljubljana, and other towns to protest against the new administration, which took office on March 13.

The song “10,000 bicycles in Ljubljana” by Prešerne Misli, which has Slovenian and English language versions, was published on the Bajk Štrajk (Bike Strike) YouTube channel.

The government of the Republic of Slovenia is headed by controversial Prime Minister Janez Janša, who has made a political comeback after spending six months in jail on bribery charges in 2014.

His Slovenian Democratic Party is part of an informal and illiberal alliance of populist and pro-autocratic parties headed by Hungaria's ruling party Fidesz.

PM Janša's government announced a new “anti-Corona law” on April 30, to protect the health of their citizens and “revive the economy — especially the building sector.”

However, the government snuck in measures to completely undermine environmental safeguards, causing environmental organizations to protest.

According to BirdLife International:

This new law is so outlandish, it has been sent to Slovenia’s Constitutional court for review. Parts of it may be in direct violation of both the Slovene Constitution and the Aarhus convention.

The protest song also targets the divisive populist policies practiced by the ruling party, including promotion of hate speech by affiliated media.

Dear government please stop dividing us in half,
right and left.
It doesn't matter any more.
All that matters is for you to show respect.

On March 27, Reporters Without Borders (RSF)  and six other press freedom organizations warned that Slovenian investigative journalist Blaž Zgaga had been targeted by a hate campaign fueled by the government on social networks and in the media.

The campaign began after Zgaga sent an official Freedom of Information Request on the COVID-19 pandemic to authorities in Ljubljana.

International and local civil society organizations have urged the European Commission to do everything in its power to guarantee Zgaga's safety and to ensure that death threats and attacks against him are treated with the utmost seriousness by the Slovenian authorities.

We'll protest in peace,
with masks on our faces.
And we'll keep distance.
We won't let our health system collapse.

The Slovenian bicycle protest song is a cover of the song “Nine Million Bicycles” written and produced by Mike Batt for the Georgian-British singer-songwriter Katie Melua in 2005.

Slovenians are fiercely proud of their cultural heritage, in particular their language as expressed through poetry and other literature.

The name of the band — Prešerne misli — can be interpreted “Bold thoughts of good will” and is also associated with the name of France Prešern, an acclaimed 19th century poet, whose works are considered European classics, and were required reading in the educational curricula of former Yugoslavia.