‘One Country, Two Systems’ on the line as national security law looms over Hong Kong

Activists are standing firm against a hammer blow for local autonomy 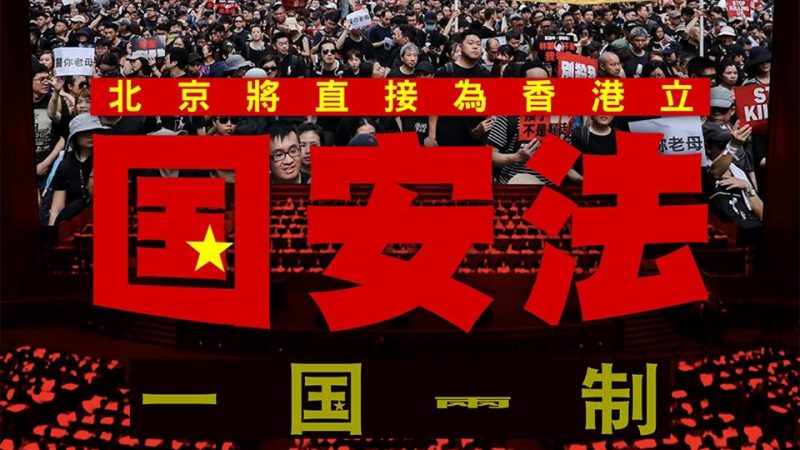 A resolution tabled at China's National People’s Congress (NPC) is threatening to derail the freedoms that distinguish Hong Kong from China and override what remains of the city's autonomy.

On May 22 at the NPC in Beijing, the most important event in China's political calendar, a draft was tabled entitled “The NPC’s decision on establishing a sound legal system and enforcement mechanism for safeguarding national security in the Hong Kong special administrative region.”

The so-called “sound legal system and enforcement mechanism” could bypass Hong Kong legislation and empower the Standing Committee of the NPC to insert the national security law into ANNEX III of the city's mini-constitution, as written in article 6 of the draft decision:

…the NPC Standing Committee makes the decision to include relevant laws into Annex III of the Basic Law of the HKSAR, and the HKSAR promulgates and implements them.

Annex III in Hong Kong's basic law originally contained a set of five national laws including the National Flag and Emblem Law that were directly enforced in Hong Kong following its handover from the United Kingdom to China in 1997.

Beijing's move to insert a new national security law there sets a worrying precedent through which Annex III can be used to impose other Chinese laws, such as the Cybersecurity Law, onto Hong Kong.

In addition to the direct application of the national security law in Hong Kong, the NPC decision allows Beijing to set up security agencies in Hong Kong, local public broadcaster RTHK reported on Twitter:

Mainland departments involved in defending national security will be able to set up in #HongKong, under the legislation Beijing is planning to add into Annex 3 of the Basic Law.

The decision also requires the Hong Kong government to enact its own national security law according to Article 23 of the Basic Law, which would provide the legal basis for the expansion of related law enforcement units.

The national security law has been a controversy since the handover of Hong Kong from the United Kingdom to China in 1997.

A national security bill was henceforth tabled at the Hong Kong Legislative Council (LegCo) in 2003. But the bill triggered a giant city-wide protest and was dropped, despite insistence from the mainland.

Beijing's efforts to introduce a controversial China extradition bill via its proxies in the LegCo last year meanwhile sparked the biggest anti-government protests in Hong Kong's history, which forced the bill's withdrawal.

Despite Beijing labelling the protests as acts of terrorism — all the more notable in the context of the looming legislation — the results of district elections held in the city last year indicated strong popular support for pro-democracy, pro-autonomy politicians. This is notwithstanding the negative economic impact of the year-long demonstrations.

At the NPC, Wang Chen, the vice chairman of the NPC Standing Committee cited the Hong Kong protests as a national security risk that “challenged the bottom line of the ‘One Country, Two Systems’ principle, harmed the rule of law, and threatened national sovereignty, security and development interests.”

The NPC, which exists to rubber stamp important government legislation, will finish its work on May 28.

End of ‘One Country, Two Systems'?

In Hong Kong, the NPC’s decision is being widely interpreted as the end of “One Country, Two Systems” — a concept to safeguard the ex-colonial city's political autonomy, which was written into the Sino-British Joint Declaration.

Distinguished journalist Melissa Chan was disheartened to see such a development:

Real estate companies and financials were among the biggest victims in a stock market sell-off in Hong Kong on Friday after China submitted a security law proposal for the city that has fanned fears of fresh protests. https://t.co/yBkFHFvZu9

Local search engine data showed a rapid surge in searches involving “national security law”（國安法）and “emigration” (移民) after news about the resolution was first reported on the eve of the NPC opening.

Joshua Wong, a thorn in the side of the Chinese Communist Party, who advocated for the enactment of Hong Kong Human Rights and Democracy Act in the U.S., said that he and other activists would “stand firm”:

The Chinese Communist Party is definitely trying to wipe out Hong Kong’s connection with the international community with a catch-all tactic. But no matter what, I have the duty to stand firm with my position. There is no reason to give up on fostering possibilities for gaining international support. I never regret pushing the Hong Kong Human Rights and Democracy Act forward. Even though this could someday incriminate us and be the excuse to wipe us out, Demosisto takes pride in our devotion to connect Hong Kong and the world.

Nathan Law, a former lawmaker who was disqualified following an oath-taking scandal in 2017 said:

One of the major reasons the Chinese Communist Party has opted for doing it now is to restrain the international community from standing with Hong Kong, but we must strive for the world’s support. Using Twitter, Facebook, sharing news, personal commentary, signing petitions, raising concerns are basic freedoms on the Internet. If the autocracy unreasonably stifles Hongkongers’ mildest acts, it will definitely fuel resistance…
We need the strongest determination to confront the most evil era in history.

Kevin Yam, a lawyer and activist, said that he believed Hong Kongers would survive the assault on its autonomy.

I understand the high emotions over what’s happening to #HongKong. But #HK is NOT dead. We have some of the most nimble, resilient, resourceful, pragmatic people on this planet. Our way of life may soon be circumscribed but we will find a way to survive and prosper through this.