Burundi voted — but will the political situation change? 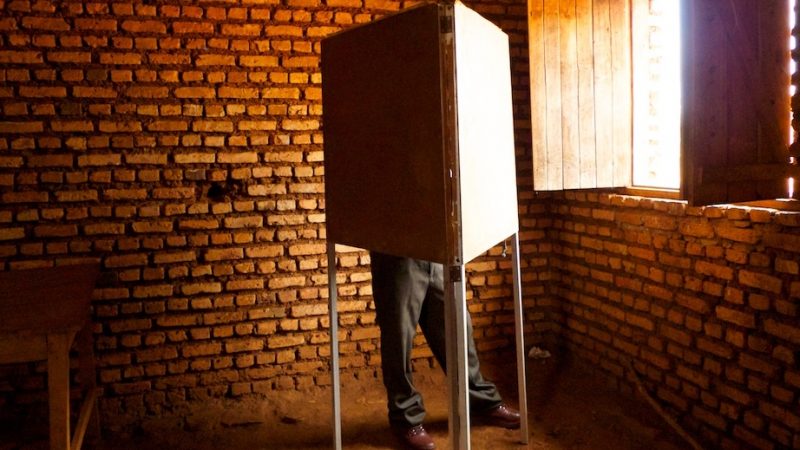 A person votes in Burundi elections in the northern province of Kirundo, Burundi. Photo by Brice Blondel via Flickr, CC BY-NC 2.0.

Burundians voted on May 20 in the first round of presidential, deputy, and councilor elections — with most attention on the president.

Throughout the entire election process, ongoing concerns over security continue to loom.

Burundi has registered 5.1 million voters but citizens abroad were unable to vote. Refugees were also not able to vote due to a lack of identification. According to the United Nations, there are 330,000 registered refugees plus 87,000 otherwise recorded in the region.

RFI reported a high turnout and Iwacu newspaper showed long queues to vote early in the morning. There were some reports of voter registration irregularities and the withholding of voter cards.

Opposition CNL party candidate Agathon Rwasa rejected these initial results as “fanciful,” saying there was proof of fraud, including ballot-box stuffing, and that he would appeal. Contested results could further deepen tensions.

Many expect ruling party candidate Ndayishimiye to become president in an even more powerful position after the 2018 constitutional changes — with a seven-year term.

The results are expected within a week.

Social media was blocked early on May 20 until the following evening. With the restrictive media environment and a lack of independent electoral observers, Reporters Without Borders criticized elections as occurring “behind closed doors”:

The government highlighted its financing of these elections independent of aid. However, the International Crisis Group (ICG) described the “voluntary” public collection of funds as a “confiscatory and arbitrarily administered system of forced contributions.”

Some opponents questioned the Independent National Electoral Commission (CENI), criticizing the over-representation of ruling party supporters among polling station monitors, and not publishing the list of registered voters. The Council for the Defense of Democracy party (CNDD) withdrew from elections, criticizing irregularities and closed political space.

Ruling party candidate Ndayishimiye said the elections would be secure, speaking after clashes between security forces and gunmen in February. Despite this narrative of calm, though, the UN Commission of Inquiry warned of a “spiral of violence.”

Days before the election, amid the COVID-19 pandemic, the ruling government kicked out World Health Organization country representatives.

As the government kicks out the @WHO team and elections approach, a perfect storm is brewing in #Burundi. New dispatch for @hrw https://t.co/FBdSa3vsSK

Despite a few reported cases of COVID-19, there are concerns over limited measures and underreporting. During campaigning, distancing measures and the topic itself was reportedly forgotten.

East African Community members were called on as election observers. However, on May 8, officials required a 14-day quarantine on arrival, due to COVID-19, making it unworkable. CENI said there were some observers from various embassies.

CENI initially rejected four out of the ten submissions for presidential candidates. On appeal, ex-president Domitien Ndayizeye was accepted as the seventh candidate with the Kira-Burundi party.

While there are seven candidates and numerous parties, Iwacu observed the ruling CNDD-FDD and opposition CNL parties remain the political centers of gravity.

The ICG said the final result was not completely certain, given the successful campaign of opposition CNL candidate Agathon Rwasa.

Kira-Burundi party and UPRONA with candidate Gaston Sindimwo (current first vice-president), suffered splits. Opponents in exile boycotted this time, but they are also weakened by divisions and the failure of mediated dialogue.

Analyst Thierry Vircoulon argued that the ruling party benefits from the existence of opposition voices but only to give an appearance of democracy. Change appears unlikely with the new candidate because the “council of generals” within the ruling party remains the locus of power.

On the campaign trail

Many were also frustrated by delayed voter cards, even after the deadline was extended, and some CNL supporters accused Imbonerakure of withholding their cards.

Iwacu and RFI described a campaign marked by violence, including murders, kidnappings, fights and interference in rallies. These acts are disproportionately committed by CNDD-FDD supporters, often with complicity from police, although all campaigns were affected.

CENI’s president said the campaign went well and CNL supporters were not targeted. Police spokesperson Pierre Nkurikye even blamed CNL supporters for most incidents, although the Burundi Human Rights Initiative said this lacked credibility and neutrality.

Most candidates focused on economic development in their messaging, and independent candidate Dieudonne Nahimana focused on youth. Political language often became confrontational, though.

In CNDD-FDD ruling-party candidate Ndayishimiye's speeches, he referred to the 2015 crisis and said his party could not be stopped from winning again as they had a “divine mission.”

CNDD-FDD speeches often evoke god, protecting them from enemies, including Rwanda and Western states. They often denounce critics as imperialists to discredit them, positioning itself as a “liberator.”

CNL's Rwasa said people would not accept electoral fraud, and he argued CNL supporters should not be held responsible if they defend themselves. A police spokesperson and interior minister then accused him of inciting violence. Rwasa reiterated that they did not want conflict.

Leonce Ngendakumana, the Sahwanya-Frodebu party candidate, also criticized the CNDD-FDD’s rule. Francis Rohero, an independent candidate, said he viewed Rwasa and Ndayishimiye similarly — both ex-rebels focused only on their supporters.

After the 2015 elections, protests and a failed putsch followed, which triggered repression of opponents, media and civil society, rebel attacks and economic strife. Several hundred thousand fled the political and economic crisis as refugees.

The now-banned rights group Ligue Iteka recorded “hidden crimes” of 549 forced disappearances since 2015 and 67 killings between January and March 2020.