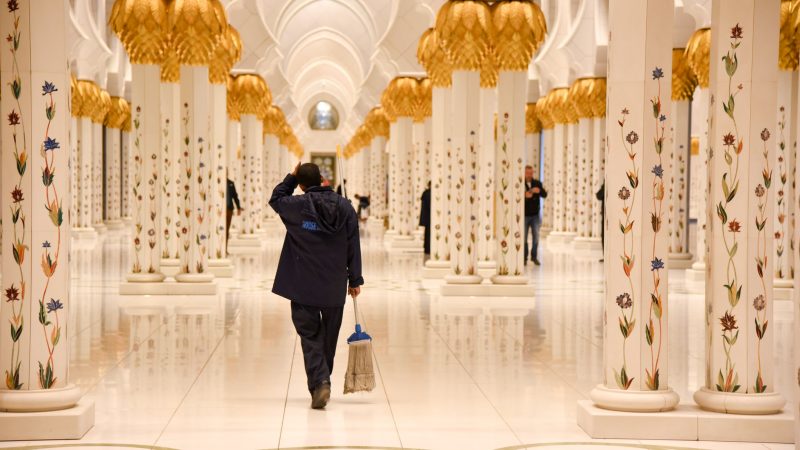 All Glitter and No Glory — A migrant worker wipes sweat off his forehead after a long day of housekeeping work at Sheikh Zayed Grand Mosque in Abu Dhabi, UAE. Image by Student Media Grantee Puru Shah documenting the plight of labor migrants in the UAE and Nepal. Via Flickr account of Conflict and Development of Texas A&M. CC BY-NC-ND 2.0

When Nepal went into a nationwide lockdown on March 24, it closed its borders to all incomers from high infection countries — including Nepali citizens. In April, the Nepali Supreme Court passed an order mandating that the government repatriate Nepalis living abroad; however, the government has yet to take action.

As stranded Nepalis wait for news about their repatriation, a group of migrant workers in the UAE are protesting against their employer, claiming that the COVID restrictions mean they are not getting paid. Faced with dwindling resources, the Nepali workers are asking to come home.

Around 500 workers at a hotel in Abu Dhabi claim they have not been paid for the past two months nor given work, and instead are being left to languish in crowded rooms. On their Facebook group, Nepalese living the UAE, one Nepali claims that they are being abandoned by both their employer and the Nepali government: 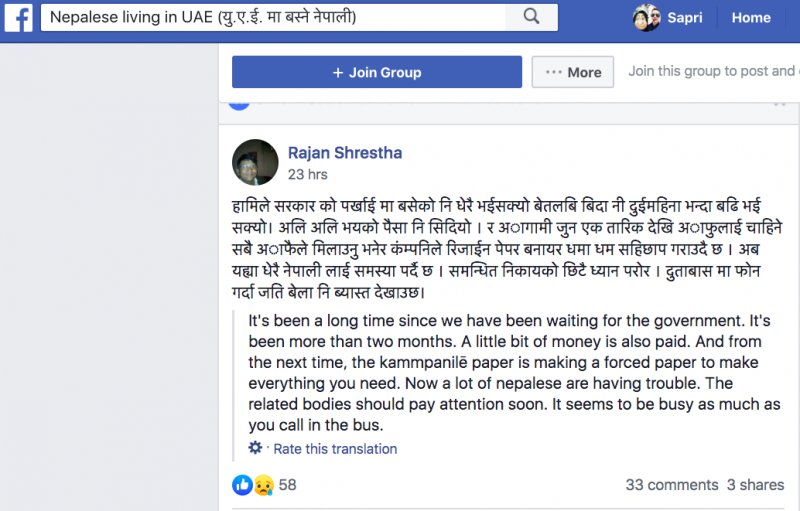 We have been waiting for so long to hear from the government, our two months of unpaid leave has ended, whatever little money we had with us is all finished now. The company is asking us to arrange our needs by ourselves from the first of June and has taken our signatures on resignation letters. Many Nepalese are facing problems. We have been calling the embassy but it is unreachable. The concerned authorities need to pay attention to us as soon as possible.

We are ready to stay in quarantine for as long as the government wants us to. They can put us in the jungle, far away from human settlements. We don’t want to spread Covid-19 in Nepal. We just don’t want to die in this desert.

The governments of India, France and Germany have organized charter flights for their own citizens, including those stranded in Nepal. For Nepalis, no such aid has been provided.

@PM_Nepal we are stranded abroad. please repatriate us or at least lift international flight ban for certain window. we can't sustain ourselves for much longer. covid19 is not going away soon, it will take long time for vaccine. so are we to suffer in foreign land until then?

Read More: For Nepal's migrant and daily wage workers, lockdown is more dangerous than the coronavirus 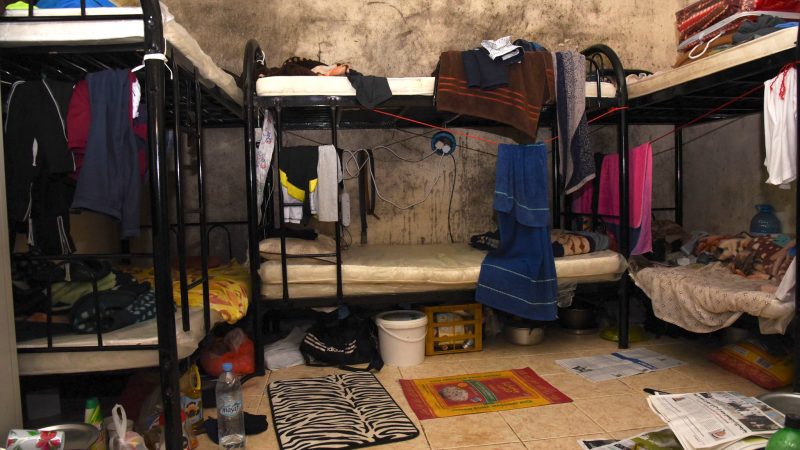 Living in an Emirati Workers quarter. In some workers’ quarters in the Musaffah industrial area of Abu Dhabi, up to 12 men live in a single room of approximately 100 square feet. Image by Puru Shah. Via Flicker account of condev.org. CC BY-NC-ND 2.0.

Nepal has one of the highest levels of remittances as a share of GDP in the world (25.4 % in 2018-2019), and nearly 50% of every household in Nepal has at least one person living abroad. In an interview with the Kathmandu Post, Former labor minister Gokarna Bista accused the current government of abandoning the very workers who have long sustained the country's economy:

Many have lost their jobs. They are struggling with a shortage of food and proper accommodation. But the Nepal government has said that these workers cannot be brought home. While the host countries are asking them to go, the Nepal government is not willing to bring them home. These workers have for long given their blood and sweat to sustain the country’s economy. If the government does not show its responsibility and provide its guardianship to these workers, it is a serious issue.

However, the process of repatriating the huge numbers of migrants from around the world is a daunting task. The government will have to prioritize where to begin the repatriation process, and then upon arrival, where to quarantine the returnees. At present, the government is only too aware of the precarious state of the healthcare system which is ill-equipped to handle a large number of cases and where test kits are also limited.

Nepali authorities have made little provision for returning citizens because they have few facilities to quarantine them.

Human rights groups like Amnesty International have maintained that the government must implement measures to protect people whose health and livelihoods are at risk and request international cooperation and assistance from the international community to ensure it can do so in an adequate and timely manner.

In April, Amnesty International called out the Nepali government for not doing enough to help its citizens:

Instead of proactively reaching out to Nepali migrant workers, the government seems to have limited itself to a weak information-sharing role. Last month, the foreign minister and the labour minister instructed Nepali missions in the Gulf to ‘remain in regular contact with Nepali nationals’, advising them to stay safe and take precautions, following the health protocols outlined by their host governments. They are not being supported as they contend with the prospect of contract terminations, delays or non-payments of salaries, forced unpaid leave, or being forced to work in hazardous conditions that put them at greater risk of contracting the virus.

In the meantime, lawmakers have suggested a phased approach to repatriation whereby the most vulnerable are returned first. It is estimated that 127,000 will return immediately, mostly from Qatar, although a date has yet to be fixed.

The UAE, which had previously shown a willingness to bear the cost of repatriating migrant workers, has been waiting on Nepal's permission to do so. Now that the protests have erupted, it is uncertain whether they will continue to wait.