Struggling against conspiracy theories on and offline 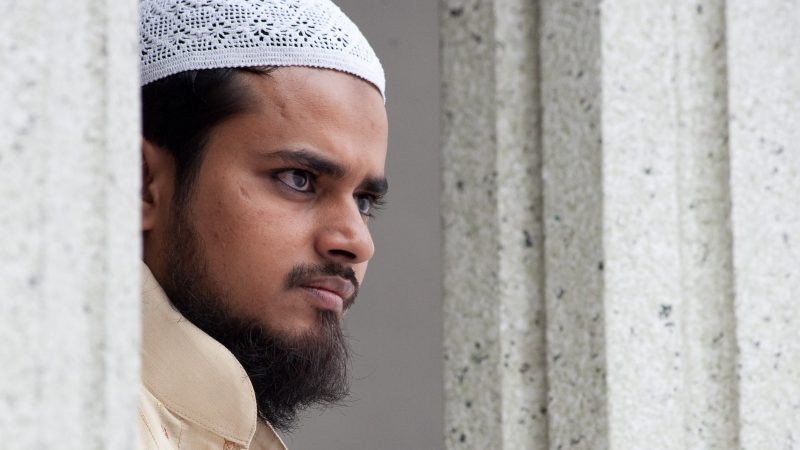 During the end of Ramadan celebrations in 2009, a man at Nepal's Jame Masjid Mosque in Kathmandu looks pensively into the distance. Image by Flickr user @Ingmar Zahorsky (CC BY-NC-ND 2.0)

In early April, 13 members of Islamic missionary group Tablighi Jamaat tested positive for coronavirus while living in a mosque in southeastern Nepal. Many of them were Indian nationals who had returned from a Delhi-based gathering organized by the religious group in March — referred to as a “super-spreader event”.

As India deals with an increase of online and physical attacks against Muslims, Nepali Muslims are worried that their country may follow suit.

The precarious status of Muslims in Nepal

Muslims make up around 5% of Nepal's population, and in terms of access to health and education as well as standard of living, the group falls well below average.

With a history of limited physical protection from the state and local authorities in times of need, members of the Muslim community have been victim to attacks in 2004 and most recently in 2016.

After the 13 Tablighi Jamaat members tested positive for the coronavirus in Nepal, conspiracy theories led to online anti-Muslim vitriol which solely blamed the religious gathering in Delhi for the spread of the coronavirus.

#Ramadan has always been a time of joyous celebration. This year however, there is anxiety and fear among Nepal’s Muslims because of fears that they will be blamed for the virus.@AlishaSijapati from @NepaliTimes reports on Ramadan during #lockdown.https://t.co/g0c7NbFU5X

I request the @NepalPoliceHQ to arrest these people and take strict action against them because these people want to spoil the good environment of Nepal and are spreading hatred against Muslims. pic.twitter.com/7wtQCcmlfh

Tejendra Kunwar: the police have sealed all mosques in Gulf countries, why is it still open in Nepal? All mosques need to be sealed before we face the worst.

Naresh Prashad Patel: No place will remain safe if the government doesn’t focus on tracing, testing and treatment from eastern terai to west on time.

Padam KC: Musa-Ban [“ban” is a curse word which means dead] is ruining everything.

Krishna Rimal: The government should strictly speed up the search of Jamatis.

Nabin Devkota: should bomb attack all mosques of Nepal.

In neighboring India, Narendra Modi's nationalist Hindu party has been accused of creating an atmosphere of Islamophobia. Arjun Appadurai, a professor of media, culture and communication at New York University explains how the coronavirus pandemic has exacerbated existing issues in the country:

One of the key features of anti-Muslim sentiment in India for quite a long time has been the idea that Muslims themselves are a kind of infection in the body politic. So there’s a kind of affinity between this long-standing image and the new anxieties surrounding coronavirus.

The fact that India focused almost exclusively on the gathering of the Tablighi Jamaat Islamic group to the exclusion of all others speaks to a much larger history of scapegoating and inciting communal violence. And Muslim Indians have indeed been targeted through social media through viral hashtags like #CoronaJihad’.

While Muslims have been marginalized in Nepal, from education to politics, Kathmandu-based American journalist Peter Gill explains that, unlike in India, the recent anti-Muslim sentiment does not have overt rhetorical support from ruling Nepali political parties:

“…religious violence [in Nepal] is much less common than in India, where interfaith relations have been fraught since the bloody partition of India and Pakistan in 1947… [In Nepal] there are no powerful political groups that openly target Muslims in Nepal. The mainstream Hindu nationalist political party, the Rastriya Prajatantra Party, has focused on trying to restore Hinduism as the official state religion, bringing back the monarchy and stopping the spread of Christian proselytization. While these issues are indirectly threatening to Muslims, the party generally does not oppose Muslims in its rhetoric.

However, this may not be enough to allay the fear of Nepal's Muslim community. For the head of Nepal's Jame Masjid, Abdul Shamim:

After these cases, whenever there is news of confirmed cases going up, people are always asking were they Muslims? Were they caught in a mosque? The media highlights Muslim positives, they never say a Hindu or a Christian tested positive. […]

Muslims in Nepal are a minority and have peacefully coexisted without any conflict for centuries, but now I dread the future, and the rise of xenophobia and intolerance spreading from across the border.

As the Nepali government struggles to respond to an overwhelming series of challenges posed by the coronavirus, including organizing the return of thousands of its migrant workers abroad, and harmful testing, the situation for Nepal's vulnerable populations is only likely to get worse.