Police may be given more powers to monitor social media 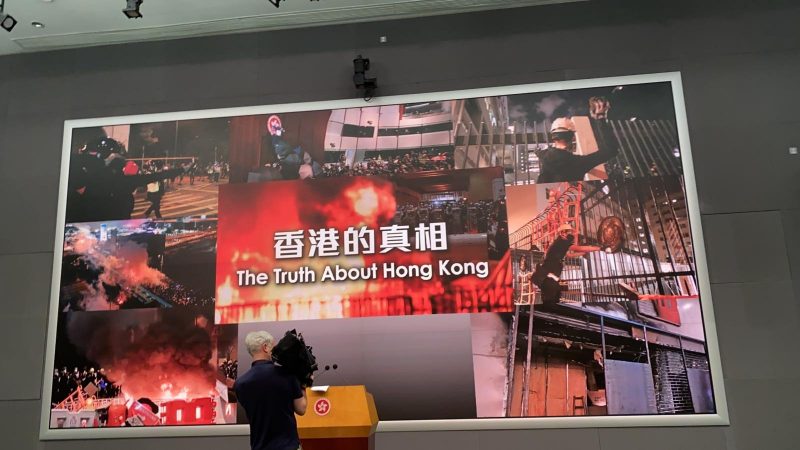 Hong Kong’s Independent Police Complaints Council (IPCC), a government-appointed organization with no investigative power to summon witnesses, released on May 15 its report on public complaints against the police during the city-wide protests that began last June. The 999-page report concludes that police officers generally acted within guidelines, but there was “room for improvement”.

Clifford Stott, a British expert on riot research who quit the IPCC's foreign expert panel last December, suggested that the backdrop of the press conference at which the report was shared, formed part of a broader thrust aimed at delivering a particular message:

It would seem the release of the IPCC report is part of a wider set of coordinated announcements designed to deliver the new 'truth'. https://t.co/xQ5n0UElMm pic.twitter.com/bnsYZhBCmY

Large-scale protests erupted in June 2019 demanding that the Hong Kong government withdraw an extradition bill allowing for the transfer of fugitives to mainland China. The government refused to trash the bill, even after a million demonstrators took to the streets on June 9. Three days later, thousands of protesters blocked the roads surrounding the Legislative Council and riot police fired rounds of tear gas on peaceful protesters.

The police crackdown led to massive protests on June 16, with two million people demanding that Chief Executive Carrie Lam step down. They also wanted the “riot” label that had been attributed to the June 12 protests removed.

The deferral to withdraw the bill led to multiple rounds of clashes between police and protesters. Amid calls for democracy, independent investigation into the use of force by the police emerged as a major demand.

However, the government refused to set up an independent investigative body, instead insisting that the toothless IPCC examine the police’s behavior. All information that the IPCC receives is provided by the police authority. Eventually, Carrie Lam agreed to appoint a team of foreign experts to assist with the IPCC’s review.

In their progress report last December, these experts concluded that “a crucial shortfall was evident in the powers, capacity and independent investigative capability of IPCC”. The team was thereafter dissolved.

The current report has not addressed any individual cases of police violence. Rather, it reviews the police response in six major protest incidents, including the Yuen Long mob attack on July 21, in which protesters and subway passengers were beaten by a pro-Beijing mob. There was no police presence at the spots where the mob, sticks in hand, gathered outside the subway station, causing the general public to believe there was collusion.

The IPCC report admits there were “deficiencies in police deployment and other police action in response to the events,” but stressed that there was no evidence of collusion with criminals “despite our best efforts in searching publicly available sources”. It added that public perception about the police was based on “misunderstanding”.

The Hong Kong Police Force has been accusing the media of creating misconceptions about the police authority. In March, Commissioner of Police Chris Tang filed a complaint to the Communications Authority against Radio Television Hong Kong’s satirical program “Headliner”, claiming that it was undermining police work and eroding law and order.

The public broadcaster has faced huge pressure after its news investigation on the Yuen Long Mob attack established evidence that the Yuen Long police were well aware of the violent incident, but did not intervene. In the report, the IPCC gave 52 incident-by-incident recommendations, the majority of which were related to improving the police force's public relations, facilities, and staffing.

The Independent Police Complaints Council’s report is a shocking whitewash which shows that there is no viable mechanism in Hong Kong to ensure accountability either for police brutality or police complicity with violence by criminal thugs. With rights groups reporting incidents of torture in detention and routine excessive use of force, it is now time for the international community to establish an independent inquiry, to hold the perpetrators of violations of human rights in Hong Kong to account. The introduction of targeted Magnitsky sanctions on those responsible for such violations should then be considered.

Magnitsky laws allow for sanctions to be imposed on human rights violators.

The report is not just superficial. It’s hollow. It has recollected some government information services handout. It’s all part of the establishment speak. It’s [the] Ministry of Truth à la George Orwell’s 1984.

Indeed, the issue of “truth” is politically significant: the report blames online information for destroying the image of the police, paving the way for the crackdown on free speech:

[Many complaints are] blatant propaganda with little or no factual basis, aimed at smearing the Police Force and impeding police officers from performing their duty to maintain law and order.

‘The truth about Hong Kong’

Standing in front of press conference backdrop proclaiming “The Truth About Hong Kong”, Carrie Lam announced that the police may be given more powers to monitor social media, and tackle “false and malicious information” and “rumors”. To this suggestion, Clifford Stott exclaimed:

Ahead of the release of the IPCC report, pro-Beijing political groups launched two advocacy campaigns to restrict the city’s freedom of the press and freedom of information.

On May 13, the Democratic Alliance for the Betterment and Progress of Hong Kong, the biggest political party in Hong Kong, put out research stating that 70.9 percent and 61.6 percent of interviewees, respectively, believed that youth was invited by “fake news” and opinion leaders into committing crimes including violent protests and hence urged that there should be legislation against the spread of online disinformation.

On May 14, pro-establishment civic group Civic Force staged a protest outside the Hong Kong Journalists Association, demanding the implementation of a government-issued journalist license system.

Both the online rumor law and the journalist license system are in place in mainland China. The new “truth” in Hong Kong is becoming aligned with the “one country”.