The country has shifted away from Moscow, but is reluctant to antagonise it

Memorial of Victory Over Fascism Day, May 9, 1945 in Centar Municipality, Skopje, North Macedonia, donated by  the Russian Embassy on May 9, 2020. Photo by Meta.mk, used with permission.

Google “Russian Embassy”, “World War Two” and “monument” and you will most likely be drawn into the high-drama historical standoff bedevilling relations between Moscow and the Czech Republic.

More on that, here.

But this month also saw a much quieter example of Russian World War Two diplomacy, as countries across Europe marked 75 years since the Nazi surrender.

On May 9, the mayor of the municipality of Centar (one of ten municipalities in the Macedonian capital Skopje), and the ambassador of the Russian Federation in North Macedonia unveiled a new memorial honoring the “Day of Victory over Fascism.”

The site of the new granite slab monument is a sleepy street in a residential neighborhood of Skopje that was named “9th of May” (9 Maj) decades ago.

The high-relief image on the monument — redolent of socialist realism in style — depicts a soldier in a cloak holding an iconic Soviet submachine gun PPSh-41.

The text on the monument is in the Macedonian language:

This street has been named in honor and memory of 9 May 1945, the Day of Victory over Fascism in Second World War. Eternal glory to the heroes, the fighters of the anti-Hitler coalition who vanquished Nazism and freed the peoples of Europe!

Russian Ambassador Sergei Bazdnikin said that the model for the memorial was a monument to Soviet soldiers in the Russian city of Rzhev, near the site of bloody historic battles in 1942 and 1943 where almost 400,000 Red Army soldiers perished.

Mayor of the Centar Municipality Sasha Bogdanovikj noted that the Municipal Council welcomed the embassy's initiative and had voted unanimously to approve the monument.

This is not the first time in recent years that the embassy has helped the Republic of North Macedonia, a successor state of the Socialist Federal Republic of Yugoslavia, commemorate Soviet achievements. 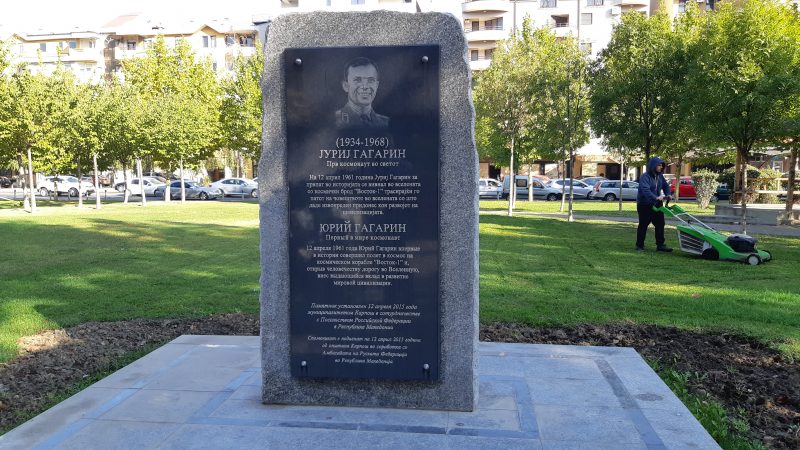 In 2015, another Skopje municipality, Karposh, erected a similar granite bloc in honor of the cosmonaut Yuri Gagarin in a ceremony attended by then-Ambassador Oleg Scherbak.

In recent years, geopolitical controversies related to Victory Over Fascism Day have abounded, as countries blame each other for politicizing celebrations and distorting historical facts for propaganda purposes.

In Russia, it is a major national holiday that this year was widely celebrated, even under lockdown.

However, citizens in neighboring countries such as Ukraine and the Czech Republic are often more inclined to view the Soviet Union and the Red Army in a negative light.

Russian influence in the Republic of North Macedonia intensified after May 9, 2015, when then-President Gjorgje Ivanov attended the Victory Day Parade hosted by Vladimir Putin in Moscow.

NATO had recommended its members and allies to boycott the parade in protest over Russian aggression against Ukraine.

The Macedonian leader's 2015 snub of NATO's call for solidarity placed in doubt the country's strategic goal of joining join NATO and the European Union.

In the years that followed, North Macedonia managed to become a member of NATO, in spite of obstructions put up by Ivanov's right-wing political party VMRO-DPMNE.

The party lost power after the 2016 elections, despite receiving unprecedented support from Russia via diplomacy, political proxies, pro-Moscow media outlets, and troll armies.

Nevertheless, the pro-EU and pro-NATO government led by the Social Democratic Alliance of Macedonia (SDSM) that came to power at the end of May 2017 has been careful to avoid antagonizing Moscow.

Skopje's cordial tone towards Russia has been even more notable in the face of provocations, such as in 2018, when ex-ambassador Scherbak declared that the country would be a “legitimate target” for Russian retaliatory attacks in the case of any conflict, if it chose to join NATO.

Bogdanovikj, who oversaw the unveiling of the monument with Ambassador Bazdnikin, is a member of SDSM, along with most of the municipal council that supported its installation.

The Day of Victory over Fascism is celebrated in most of the countries of Central and Eastern Europe, where the Red Army dominated liberation efforts, on May 9.

This is because the document of surrender was signed well before midnight in Berlin, but came into force after midnight, Moscow time.

In the Western-allied countries, the anniversary is celebrated on May 8, and is known as Victory in Europe Day, since for these countries, World War Two ended in August, with the Japanese surrender.

Despite sharing a timezone with Berlin and Paris, North Macedonia began celebrating Victory Day on May 9 as part of the then-Yugoslavia.

Unlike some other parts of the Yugoslav federation, including the capital Belgrade, Macedonian territory was liberated without direct intervention from the Red Army, in November 1944 by local partisans.

During the war, Macedonian anti-fascists had fought together with brothers in arms from neighboring Kosovo and Serbia, and other allies.

Yugoslavia soon defected from the Soviet bloc but didn't change the date of the celebration, which became a traditional minor holiday during socialism, overshadowed by other celebrations such as May Day and Federation Day, as well as Uprising Day and Army Day.

In fact, Yugoslavs often used to note that the war in the country didn't actually end on May 9, but a week later, since remaining Nazi and collaborationist forces tried to fight their way out of the country in order to surrender to Anglo-American forces in Austria.

In North Macedonia, Victory Day is celebrated together with Europe Day, a celebration of European peace and integration promoted by the European Union, which isn't a feature of the Russian calendar.

If there was no #VictoryInEuropeDay there would have been no Europe Day. Withouth #EuropeDay, Victory would have had a no meaning.
Happy and prosperous day to all! pic.twitter.com/T9sctR804X