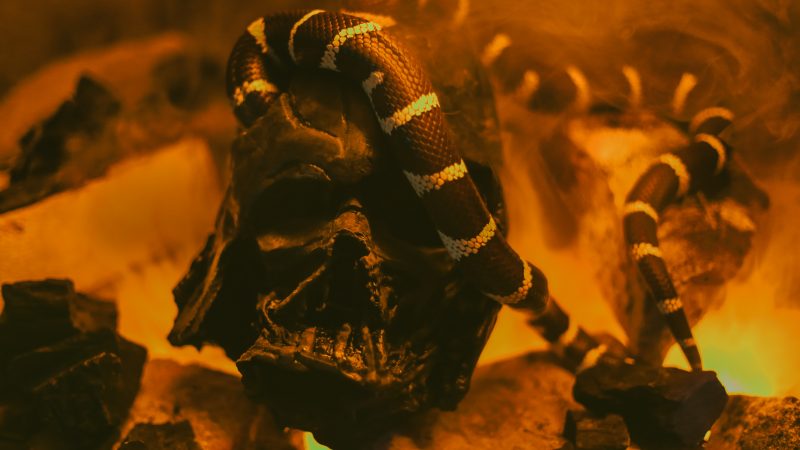 Breaking Point: A Star Wars Story. Scene shot in the catacombs under Tašmajdan park in Belgrade. Photo by Tamara Antonović. Used with permission.

At the end of last year, a Star Wars fan film with a difference enjoyed its online premier.

Breaking Point: A Star Wars Story is a 25-minute short movie made by a volunteer crew composed of around fifty professional filmmakers, film students and members of Serbia's Star Wars fan community.

It is written and directed by the award-winning Serbian filmmaker Stevan Filipović.

The film was shot on locations near the Serbian capital Belgrade.

The apocryphal story is set before the real Star Wars movie The Force Awakens and depicts the demise of the Jedi order perpetrated by Kylo Ren.

Global Voices got in touch with Filipović to talk about the movie.

Global Voices (GV): Your movie received very positive media reviews, and was lauded by local StarWars fans. Fan fiction rarely sees this level of production. How did you manage it?

Stevan Filipović (SF): I think one can easily underestimate how much Star Wars means to people around the globe. It's a crucial part of our identities, much more than some local cultural phenomena, at least for a lot of people of my generation. I think we could never do something like this — get a completely professional film crew, and such amazing actors, for a non-profit fan film — if we all didn't share a lot of love and respect for this fictional universe George Lucas has created. 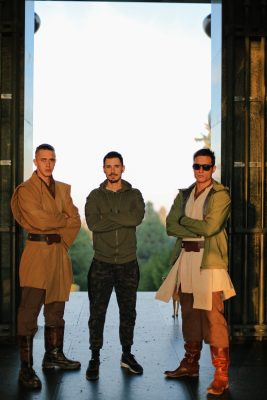 But, the other key was the story. I didn't set out to make a fan film, I wanted to make this really personal story, that happens to be set in the Star Wars universe. I think people reacted to that, saw the raw emotions and the potential of it, very early on. Darko Ivić, who plays Nol in the film, was there with me from the very start when I started dreaming about this film.

And then Slaven Došlo went to Disneyland, and brought me a gift — Yoda's lightsaber, and I knew I wanted him to portray the younger brother, Kess. He has this mix of naïveté and pain that I thought was integral to the character.

Jana was selected through casting, but the moment she walked in, we thought — that's Mala.

The rest of the crew was something of a filmmaker's dream. We had great support from Hypnopolis, the company that has produced all of my films. Basically, everybody who volunteered to help was listed as a co-producer, since we didn't have a budget.

In the end, with almost no resources, with shared love for Star Wars, and connections from my previous three feature films, we got quite literally the top Serbian film crews in all fields: from stunts to world-class visual effects, professional color grading, award-winning sound designer, through amazing creatures and prosthetic make-up effects, insane music (available on our YouTube channel), and — of course — great help from the students of the Academy of Arts, where I teach. 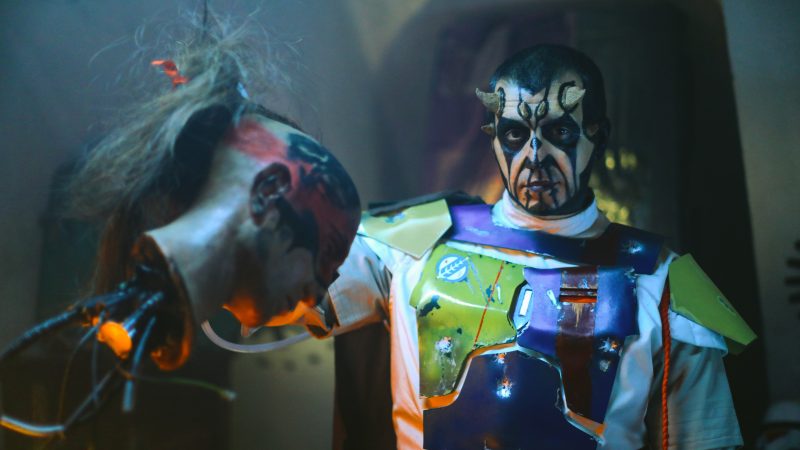 A scene from Breaking Point: A Star Wars Story. Photo by Tamara Antonović. Used with permission.

GV: Artists from the Balkans, like Zoran Cardula from North Macedonia, have in the past explored visual similarities between Star Wars iconography and the brutalist architecture of former Yugoslavia. Your film has brought this connection to a whole new level and through a completely new medium. How did you decide on those particular monuments?

SF: There is something very deeply ‘Star-Wars-esque’ in the stories and legends of former Yugoslavia, or, rather – vice versa. The epic exodus and rebirth of WWI, and then — chaos, civil war, Tito's rebel partisans from all nations who overcame their differences to fight a great evil (the Nazis), their victory, peace, the creation of this New Republic, which leads to another rise in nationalism and the fall of the Republic… It's hard to separate our actual history from a synopsis of the entire Skywalker saga! 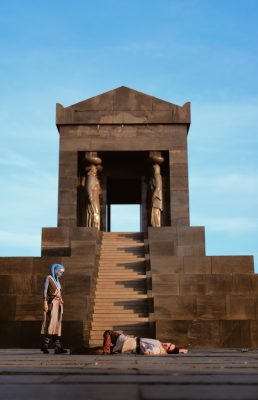 So, these relics from our past were perfect to create the atmosphere of Luke Skywalker's Jedi Academy — built after the wars, on the ruins of the bygone era — they represent the history which Nol and Dust never had a chance to learn from, yet which shaped their destinies. So, Ivan Meštrović's masterpiece, the Mount Avala Monument to the Unknown Hero became a Jedi shrine, and the Mount Kosmaj WWII monument became ancient Jedi ruins.

From a filmmaker's perspective, the Brutalist ex-Yugoslavia architecture was very modern, created in an age where we were looking to the stars, to the future, for inspiration. That makes it stand out today. Both of these locations had mystery and majesty, and I really feel they add something unique to the film. We were very fortunate to get permissions to film there.

GV: The main characters of Breaking Point are commoners. In the official Star Wars movies, members of two ‘genetically superior royal families’ (to paraphrase David Brin) and their entourages tend to run the show. Rogue One (2016) is perhaps an exception. Do you consider your short a part of a trend anticipating ‘democratization’ of that universe, with stories that explore wider social issues through the experiences of people from all social classes?

SF: Yes, well, there's that famous quote from Clerks, about all the workers who built the Death Star and their untold stories. But, seriously, I think Star Wars mythology is now so rich and detailed that it can be compared to many of the existing, historical, myths around the globe, at least in scope and sheer level of detail. The place of the pop-culture in our modern societies is yet to be analyzed by historians and social anthropologists, but, I think it's safe to say that these modern pop-cultural myths occupy a very important place in our lives. In that respect, I feel Star Wars is now more than just another franchise, it's an integral part of global cultural heritage.

So, it was interesting to me to try to find a local angle, to try to add to this mythology from our own point of view. We could never make something like The Crown here, but that doesn't mean we don't have amazing stories of our own to tell, and we sure as hell can make films like Dirty Dozen or Rogue One. And class is an important part of that. So we made the entire backstory of Breaking Point about class, in a way. It was interesting for me to imagine — could a poor kid, with no education, and no family, who grew up in the mean streets of Serbia in the 90s become a Jedi Knight, this zen warrior-monk? Or do the wounds that we all have, from the wars, the politics, crime, make us emotionally unstable, unfit? How can we escape that? 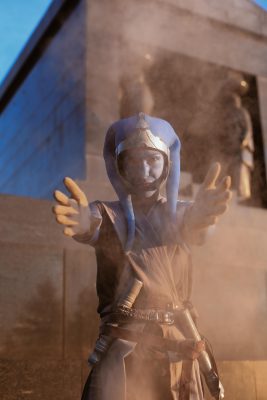 The protagonists of our film had really tough childhoods. They were separated, the older one became a drug dealer to survive. The younger one was sold to slavery to the same Dickensian crime boss who once owned Han Solo – Lady Proxima. Mala, the Twi'lek girl, was a sex worker from her early teens.

They were then rescued by Luke Skywalker, and now they are training to be Jedi, but they have these gaping wounds in their hearts, all of them. These wounds are the weaknesses that the Dark Side exploits through Ben Solo, the future Kylo Ren.

But, it's not Ben Solo who turns them against each other — it's their own fears and weaknesses and old wounds that make the brothers go for each other's throats. In short, they represent the history of the conflicts that led to the breakup of former Yugoslavia.

Brothers, killing each other, over past wounds and revived nationalism. That rise of toxic nationalism in the former Yugoslav countries has a striking resemblance to the revival of the Empire that Ben Solo was rooting for, and that is a major political point in the sequel trilogy. I'm sorry they didn't elaborate on this backstory as seriously as George Lucas did when he was creating Star Wars films. Especially in the contemporary world, where we see the reemergence of politics that we all thought defeated so many years ago, and that have caused so much pain and suffering. 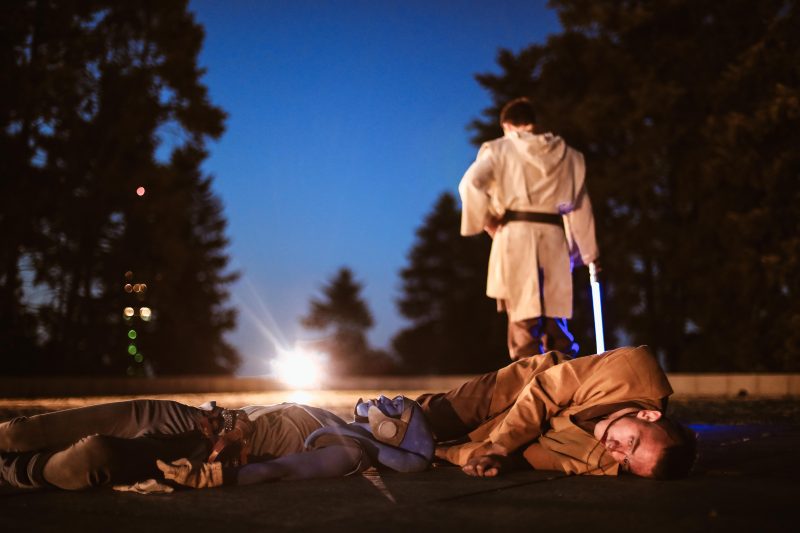 GV: Critiques of Breaking Point focused on length of the film. They wanted more. Do you plan any sequels?

SF: The ending was supposed to be mysterious, poetic, kind of elusive, like a dream. Kess dies, finding his faith again, because of the only pure thing in his life — his love for Mala. So, it's a completed story for us, and we don't plan to make a sequel. But making a prequel would be really interesting — Nol, Kess and Mala living on Corellia, before Luke Skywalker rescued them. On the other hand, perhaps it would be too dark for Star Wars. I don't know… We'll see. Difficult to see, the future, as Yoda once said.

GV: Science fiction and fantasy had been integral parts of mainstream culture in former Yugoslavia, currently very few authors from the region work in these genres. As a feature film director, you have been an outlier in this sense, with the successful fantasy film Shaitan's Warrior in 2006. In Next to Me (2015), you tackled the intersection between new technologies and society. Do you see potential for more sci-fi production in Serbia, or the wider the Balkans region?

SF: I don't care much about “genre” or “sci-fi” or other labels. I think the obsession with “genre vs. arthouse” is a very weird European phenomenon (much like the formulaic obsession with genres is a weird American phenomenon), and it kinda makes us lose focus on what really matters — telling good stories, writing from the heart, creating compelling characters that matter to the audiences.

I think we have here the potential to dream about anything we want, but we often choose not to dream, and rather to create films made to fit European financing strategies and schemes. This results in movies that feel more like a product than your average Hollywood fare, minus the virtue of being watchable. And this is the reason people are more inspired by quality TV and games than movies these days. So, in short, yes — I think we can do pretty much whatever we want, but we need to fight for a different financing system to enable it and different standards to realise the potential of thinking “outside the box”.