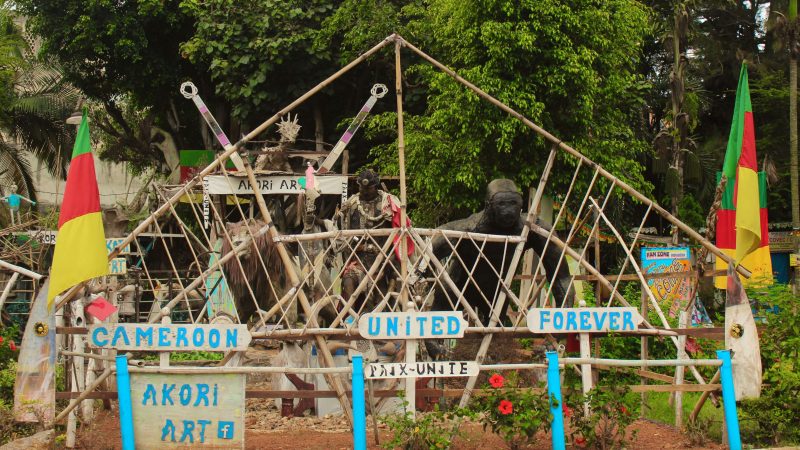 A park located at Warda junction near Mfoundi waterfalls in Cameroon. “Cameroon united forever,” reads the sign. Photo by Simbanematick via CC BY 4.0.

In November 2016, protests against French majority rule in Cameroon’s English-speaking northwest and southwest regions broke out. Protesters amplified demands by Anglophone lawyers and teachers to have the Common Law and the English education system in their regions.

These protests relied on social media  — especially Facebook — to mobilize and inform.

The Francophone government's crackdown on these protests led to a three-year separatist war — largely driven by identity and language politics — known as the Anglophone crisis.

Throughout this crisis, online attacks and identity-driven hate speech continue to stifle freedom of expression.

Clashes between separatist groups and state police and military have led to at least 2,000 deaths and about 500,000 people displaced. English-speaking separatist groups in southern Cameroon seek to break from French-majority Cameroon and create Ambazonia, a new nation.

In October 2016, a month before the protests began, the government had come under intense criticism on social media for the way it managed a train accident in the small town of Eseka, central Cameroon, that claimed the lives of more than 80 people and injured 600.

In response, the government unleashed a campaign against the dangers of social media. The state-controlled newspaper Cameroon Tribune said social media was “fast becoming a threat to peace and a secret instrument of manipulation,” advancing “character destruction, destabilization of public opinion and deformation of facts among others.”

By January 2017, the West African nation shut down the internet in its English-speaking regions for more than a year. The internet blackout — which lasted until March 2018 — occurred after stockpiles of images of torture and death appeared online that the government wanted to suppress.

This did not only starve internet users of information — the majority of whom are young people — but it also contravened a resolution adopted by the United Nations (UN) Human Rights Council in 2017 on the ‘’the promotion, protection and enjoyment of human rights on the internet.’’

The resolution condemned disruptions to internet access and ‘’affirms that the same rights that people have offline must also be protected online,” in particular freedom of expression.

Read more: Cameroon on a path to ‘national dialogue’ as Anglophone crisis continues

For decades, Cameroon has been locked into numerous, heated debates on how both English and French-speaking cultures and languages can be more equitably represented in public spaces.

The country merged with English and French languages and cultures after World War I, when Britain and France took over the then-German colony, after expelling Germany from the territory through the war.

Nevertheless, the first President of Cameroon Ahmadou Ahidjo, who ruled from 1961 to 1982, dissolved the federal system in 1972.

The result is 10 regions comprising Cameroon today, with eight French-speaking and two English-speaking.

“We have a WhatsApp group about sports news in Cameroon,” Samuel, a sports journalist told Global Voices on March 5 in Yaoundé, the capital. Samuel is an English-speaking Cameroonian from Southwest, an Anglophone region, who asked Global Voices to withhold his full identity for fear of repression:

Often we get official documents from federations in French. When my English colleagues ask why it is like that, most French colleagues hit back, saying tu dois etre bilingue [‘you need to be bilingual’] – le Cameroun est bilingue [‘Cameroon is bilingual’]. The funniest thing is that they can’t even read documents in English. We will quarrel and even lose track of the essence of the document at times – that’s how English journalists struggle for our identity in this country.

Last year, lawmakers in Cameroon pushed for a bill to reinforce the equal use of English and French as seen in Article 1(3) of the country’s constitution.

According to the law, court orders can be rendered in either of Cameroon's two official languages, English and French, — subject to the choice of actors involved. But some English-speaking lawyers fear this may lead to assimilation. Instead, Anglophone citizens want English in Common Law courts across their regions.

Journalists in Cameroon have had to be very careful about reporting on atrocities related to the country's long-running separatist war. Appearing to side with separatists or the government too strongly can lead to attacks by online trolls on either side.

“I have received a number of attacks on Facebook because of my work,” said Kehdinga Fabrice, a journalist with The Guardian Post in southwest Cameroon, who spoke with Global Voices on March 6. “An issue of The Guardian Post was posted [on Facebook] and somebody came and commented and I reacted to the person’s comment. He insulted me on the platform and even wrote me a private message describing me as a ‘government agent’,” Kehdinga said.

Facebook, where close to half of the country’s 8 million social media users have accounts, is a site where online attacks occur most frequently.

It’s a normal phenomenon … if a frontpage newspaper gives a positive side of separatists, we are attacked — it’s the same scenario if we write on the side of the government. People send me messages [to my] inbox and even threaten me. Now I just read Facebook posts without commenting to be on the safe side.

In February 2020, Cameroon held its annual race on Mount Cameroon in the town of Buea, an English-speaking city in the southwest region of the country.

Runners from the northwest region, the second of Cameroon's two Anglophone provinces, competed against Fako people, an ethnic group in the southwest, who worship the deity Epas’a Moto.

Most of the winners of the Mount Cameroon Race of Hope hailed from the northwest.

Editors from The Median newspaper posted a banner on Facebook with the headline: “Mt. Cameroon Race of Hope: NW Athletes Rubbish Epas’a Moto, Carry Away Tens of Millions.”

The headline implies that competitors from the northwest outsmarted Fako athletes and despised their deity Epas'a Moto, to win big.

The word “rubbish” did not go down well on Facebook: Many readers saw the headline as an abusive jab toward Fako people and their beliefs. It provoked numerous negative comments:

Idiot! Do you know that NW [northwest] has 100 tribes? If they win the mountain race so what? Has Manyu [another tribal group] ever won a trophy despite their Nyankpes and leopards?

Was Epas’a Moto in competition or against the athletes? All gods as we know are impartial and defend the pure of heart. By allowing this headline, The Median is supporting a wrongful insult. Let’s rethink our journalism.

In response to increasing hate speech online, the parliament prepared a bill on hate speech and tribalism in November 2019 and President Paul Biya legislated the bill into law in December 2019. Defaulters will be fined about 3 million Central African Francs or approximately $5,000 United States dollars and could serve three years in prison, depending on the gravity of the crime.

However, the government only cracks down on violators when it concerns its institutions or personalities, according to human rights lawyer Barrister Felix Agbor Balla, who was charged with terrorism in the wake of the Anglophone crisis.

The problem with government is that they politicize it – they use it when it is convenient for them. When people use [hate speech] against people who are against the government — nobody cares.

By January 2019, Cameroon was ranked among the top 15 users of Facebook in Africa which means the majority of its population uses the popular social media platform.

“Cameroon needs a robust agreement with Facebook —  for them to be a watchdog that any message that is an attack is pulled down,” Agbor Balla said.