In Afghanistan, the war does not spare newborn babies inside maternity wards 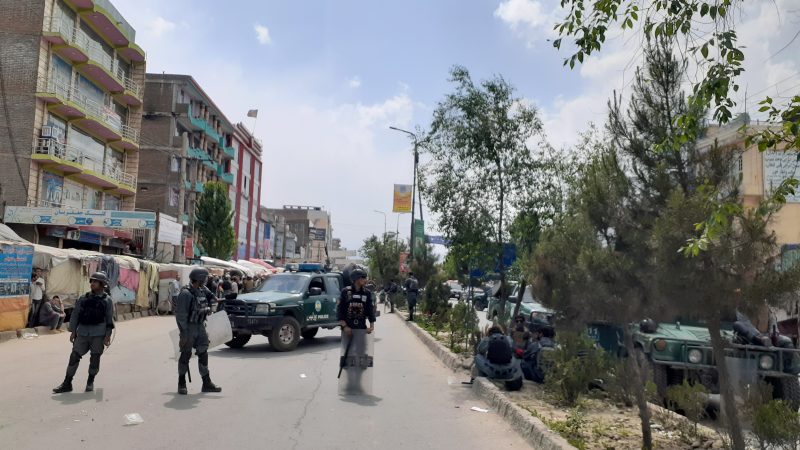 Afghan Security Forces stand guard on the site of the attack on newborn babies and new mothers in Kabul, Afghanistan on May 12. Photo by Ezzatullah Mehrdad, used with permission.

When Afghans woke up on the morning of May 12, and found out about two new terrorist attacks, they were reminded that the ongoing war had reached new levels of brutality: this time, not even newborn babies and their mothers were spared.

That day, three militants stormed a maternity ward run by the Doctors without Borders NGO in Kabul's western neighborhood of Barchi. Global Voices was able to speak to several witnesses of the events, including the family of Soraya Ibrahimi, a 31-year-old pregnant woman, who had been taken to the clinic on May 11 at 11 PM. Soraya gave birth to a baby at 1 AM, and as her family was waiting for her return, a neighbor informed them the clinic was under attack.

The family rushed to the clinic where the militants had entered the premise and started killing babies, some who had not even seen their mother. Her baby survived, but Soraya was killed.

“The guards of the clinic were unarmed and the militants entered without trouble,” Habibullah Amiry, an eyewitness, told Global Voices. “It took 30 minutes before the police arrived at the scene. They went on killing for 30 minutes without resistance.”

As many of the doctors and nurses knew about safe rooms in the clinic, they were able to escape, but newborn babies, pregnant women, and other female patients could not hide from the bullets. Three women and one kid were shot in the hallway; seven women were killed in their beds; two women were fallen on the floor of the surgery room; one woman who had her baby in her arm was fallen and a nurse was burned, according to journalist Anisa Shaheed.

“Why we could not take all those mothers to safe rooms,” Wahida Mukhtar, a staff of the clinic, wrote in her Facebook post, “This sorrow will kill me.” One woman who was brought to a safe room gave birth inside the safe room while militants were killing people outside.

The militants exchanged fire with the Afghan security forces for four hours, leaving hundreds of people outside of the clinic worrying about the fate of their loved once trapped inside. The Afghan Health Ministry reported 24 women and newborns were killed in the assault.

Even the dead are under attack in this escalation of violence

Elsewhere in the eastern Nangarhar province of the country, a suicide bomber walked among 500 people who attended the funeral of a local police commander, Sheikh Akram. The imam had asked people to line up and just announced the beginning of the prayer when the blast tore apart the crowds, killing nearly 30 and wounded 70 others.

“The body of Sheikh Akram was close to the explosion,” Naeem Jan Naeem, an eyewitness, told The New York Times. “His body was wounded after he had died.”

The attacks have taken place in the context of a fragile peace process involving the Taliban and the United States who signed a deal on February 29, with the hope of bringing the war closer to an end. The deal was expected to reduce violence in the country and promote talks between the Afghan government and the Taliban.

Yet the deal faced a major deadlock over the issue of release from prison of 5,000 Taliban prisoners. The Afghan government refused to release such a large number, eventually, only a small number was released.

Despite international calls for a humanitarian ceasefire, the Taliban have continued to wage a war in rural areas. The Afghan government has blamed the Taliban for attacks on the hospital in Kabul and the suicide bombing in Nangarhar. President Ashraf Ghani has now ordered Afghan forces to leave their previous “active defense” and go on the offensive against the Taliban.

As Deborah Lyons, head of the U.N. mission in Afghanistan wonders:

Who attacks newborn babies and new mothers? Who does this? The most innocent of innocents, a baby! Why? Cruelty has no followers from the humanity. https://t.co/ebsGl4bY5p

Previous attacks against the community included suicide bombs inside a mosque, educational center, sports venue, and wedding hall. The suicide bombing killed each score of civilians that gathered to celebrate, mourn, and learn.

“The incident is beyond painful; it is a catastrophe,” local resident Amiry told Global Voices. “Our teenagers are massacred in the education center; we are killed in the wedding hall, no mosque is left safe and this time a hospital. We are the most helpless people. Our hands are cut from the sky and our legs are cut from the ground.”