As one 'liberator' vanishes from sight, another is on the rise 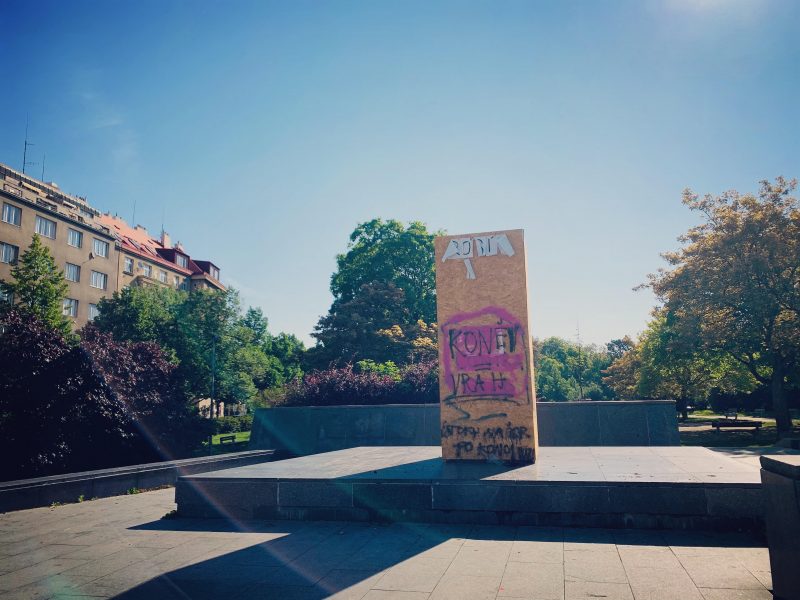 May 13, 2020 view of the former Marshal Konev monument with it statue removed. The sprayed text on the wooden structure reads “Koněv = vrah” which translates as “Konev = assassin” Photo by Filip Noubel, used with permission

The buildup to the 75th anniversary of the end of World War Two, marked earlier this month, has exacerbated a longstanding row about how contested historical figures should be perceived in both the Czech Republic and Russia.

In Prague, one of those figures — a controversial Soviet Marshal — was abruptly removed from a prominent square last month, amid furious objections from Moscow. Another figure, meanwhile, saw his own geopolitically contentious monument unveiled on May 9, the anniversary of the war's end.

Key to the standoff between the two countries is the argument over the liberation of the Czechoslovakia in 1945, which helped usher in almost half a century of communism in Central and Eastern Europe.

The Czech Republic and Russia enjoy a rich yet often conflictual relationship in which 20th century history looms large.

From 1948 to 1989, then-Czechoslovakia was officially communist and joined the Warsaw Pact military alliance in 1955. The first major crack in the Moscow-Prague axis occurred in August 1968 when the Soviet Union sent troops to Czechoslovakia to crush a political spring that rejected communist orthodoxies.

After this bloody episode, official relations normalised. In fact, by the time reformist Mikhail Gorbachev came to power in Moscow in the 1980s, it was Czechoslovak leaders who resisted the need for political change.

But change could only be resisted so long.

In 1993, Czechoslovakia itself split into two entities — the Czech Republic and Slovakia — both of which joined the European Union (EU) in 2004. From 1989 to 2003, the Czech Republic was led by former dissident and outspoken critic of communism Václav Havel.

From Moscow's perspective, this all meant a huge loss of influence and prestige.

In 1999, Prague completely turned its back on its former ally, by joining NATO.

During this period, the Czech national history heavily censored by the Communist Party line for over four decades was being vigorously reevaluated.

The view held by Moscow — and Prague until 1989 — is that the Soviet Red Army, led by Marshal Ivan Konev, played the main role in Prague's liberation, chasing away the remnants of the German Wehrmacht.

Today this idea is endorsed by the revisionist Communist Party of Moravia and Bohemia and Moravia (KSČM), a Czech party that counts over 33,000 members and is typically supportive of incumbent President Miloš Zeman

This history is still celebrated in monuments across the country that were erected during the communist period.

But since 1989, other interpretations of the event have portrayed the Soviet Red Army as having played at best a minor role in the liberation.

These accounts stress instead the role played by a group of Russians who were recruited by Nazi Germany to fight the Soviet Union — the “Vlasovtsy”, named after their leader Andrey Vlasov — but who later rebelled against the Germans.

The debate remains remarkably passionate and is easily harnessed in modern-day geopolitics.

For Moscow, it is part of the “ungrateful Europe” narrative according to which Central and Western Europe underplay the Red Army's liberation of Europe.

This sentiment was recently reinforced in Russia, after a European Parliament resolution adopted on September 19, 2019, blamed the Nazi-Soviet pact signed by Berlin and for World War Two.

The fight over urban historical memory

In the Czech Republic, tensions surrounding the liberation of Prague and the general perception of Russia have been stirred by recent political developments. 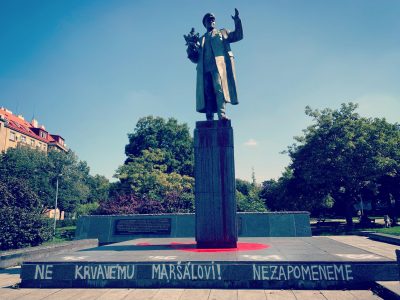 In March 2019 monument to Marshal Konev was splattered with red paint, and sprayed with the following words: “No to the bloody Marshal! We won't forget.” Photo by Filip Noubel, used with permission.

The statue of Marshal Konev, standing in Prague 6, a district of the Czech capital, was regularly defaced with paint. Citing effort and expenses spent cleaning it up, district mayor Ondřej Kolář proposed to remove it. Konev has iconic status in Soviet and Russian history.

On April 3, in the middle of the state of emergency declared by the Czech authorities to fight COVID-19, the statue was promptly removed.

The Russian embassy expressed outrage via its Facebook page:

Clearly, the initiators of the wars on monuments, through their acts of provocation, are causing a worsening of Russian-Czech relations. The removal of Marshal Konev's monument will not be left unanswered and Russia will react.

Meanwhile, the Mayor of Řeporyje, a small town of 4,000 inhabitants that is part of Prague's 13th district, Pavel Novotný, announced he would erect a monument celebrating the positive role played by the Vlasov Army in his town.

The monument was inaugurated May 9, and includes a quote from Soviet dissident writer Aleksandr Solzhenitsyn:

Did in fact all Czechs then realize what kind of Russians saved their city?

The monument to the anti-Stalinist patriots, the Vlasovtsy, who successfully participated in May 1945 in the defense of Prague against SS troops. They prevented many victims among the Czech resistance, and joined the ranks of the heroes of the Prague Uprising. We salute their memory.

The battle over monuments follows another symbolism-packed dispute over the name of a square in Prague where the Russian Embassy is located.

Prague's mayor Zdeněk Hřib, who represents the opposition Pirate Party, and often speaks out in favor of human rights in Russia and China, supported the February 24 decision of the city to rename the square called Pod kaštany (literally ‘Under the chestnuts’) after Boris Nemtsov, the Russian rights activist and opposition politician assassinated in Moscow in February 2015.

Today on the sad occasion of the fifth anniversary of the assassination of Boris Nemtsov we [renamed this square] after him, in the presence of his daughter Zhanna Nemtsova.

Moscow seems prepared to respond to these perceived slights with slights of its own.

On April 17, it informed the Czech Ministry of Foreign Affairs that it had changed the official postal address of its Prague Embassy to another street, called Korunovační, as the large compound occupies a space in which the Boris Nemtsov Square is only one side of its location.

On April 16, a group of officials from the Russian Ministry of Defense sent a proposal to Defence Minister Sergey Shoygu to rename Moscow's “Prague” subway station to the Marshal Ivan Konev station as a reaction to Konev's statue getting dismantled in Prague.

The proposal is a recommendation and has as yet not triggered an official response from the Russian government.

As tensions escalate between Moscow and Prague, the Czech police confirmed in May that all three Czech mayors — Hřib, Kolář and Novotný — have been granted special police protection.