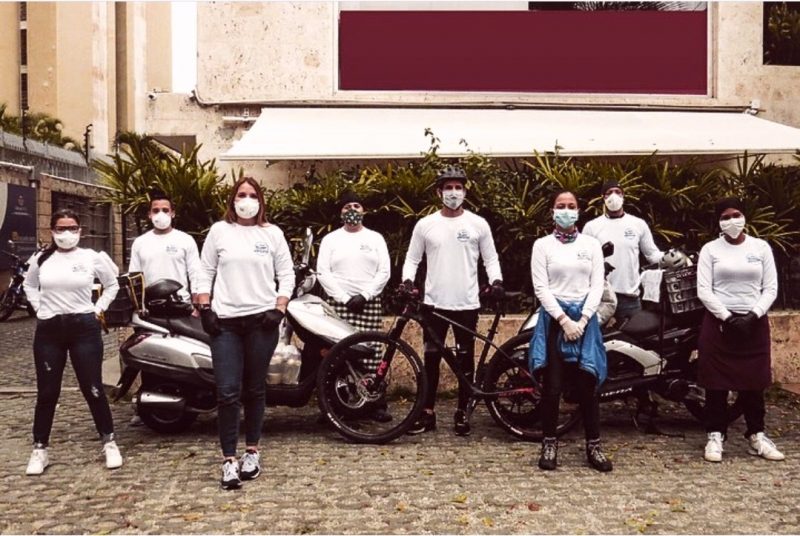 Members of the Good Neighbor Program. Photo used with permission and also available on Instagram [1].

Julieta, a nonagenarian woman from Venezuela's capital, Caracas, dances with joy and appreciation each time Vicente delivers a bag of food. This week she had the joy of receiving cheese, rice, a prepared roast and pork, soup and bread, among other food items. Like her, 400 other ‘abuelitos’ — the Spanish word for grandparents and a name commonly given to the elderly in Venezuela — receive food parcels on a weekly basis thanks to the Good Neighbor Program (Plan Buen Vecino) [2]. 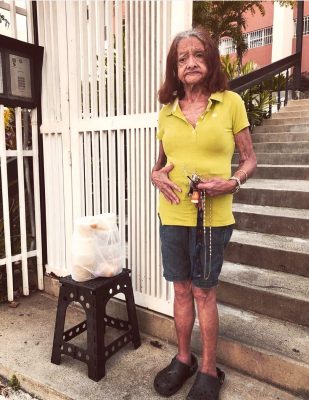 An abuelita (elderly lady or grandmother) registered with the Good Neighbor Program. Used with permission and also available on Instagram [3].

The government introduced social distancing measures [4] on March 16 the government introduced on 16 March to contain the spread of the coronavirus. However, other difficulties have since arisen. How do members of the most vulnerable population buy food, if they're afraid to go out and have no one to do it for them, or if they don't have the necessary means to do so?

Two days after the measures were introduced in Caracas, a group of individuals set up the Good Neighbor Program, a network of volunteers, which aims to deliver food to the elderly in situations of abandonment. In Venezuela, certain organizations and mass media use the term ‘abandonment’ or ‘orfandad,’ to describe elderly people, whose families have had to migrate as a result of the Venezuelan sociopolitical and humanitarian crisis, and who don't have support from the State. According to Venezuelan NGO Convite, almost one million elderly people [5] have been left alone following the migration of their families.

Yuraima Mercado, a member of the Program's logistics, told Global Voices that following the closure of businesses and restaurants, as part of the social isolation measures, some restaurants were left with a significant amount of food that they weren't able to sell. The Program's founder, Verónica Gómez, who knows some of the representatives of these restaurants, set up a project that would make it possible to distribute this food to the elderly.

After Gómez began the Good Neighbor Program, she was joined by Mercado and Valentina García. Other friends and acquaintances have been helping out by packing, providing equipment and kitchens or distributing the food parcels, mainly on their own motorcycles.

Amongst them is Vicente Velutini, who is responsible for collecting and distributing the donations. He also organizes the delivery route logistics in order to save on fuel — an asset they receive via donation and one that is significantly lacking [6] in Venezuela currently.

Vicente spoke with Global Voices about the impact of the Good Neighbor Program on a country like Venezuela:

We can't put an end to poverty, but we can do our bit to help those who need it most, which in this country, is a lot. For now, we are focusing on a small group: the most disadvantaged “abuelitos”.

The project, which came from Verónica's goodwill and initiative, now has approximately seven delivery drivers, three people in the kitchen and five in logistics, all contributing on a voluntary basis. They are all part of a “network,” as Vicente puts it. 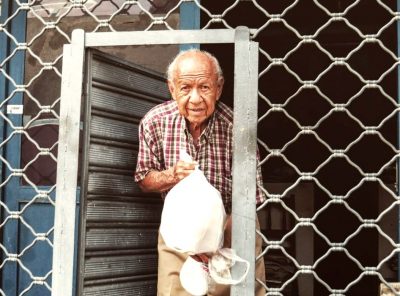 An ‘abuelito‘ (elderly man or grandfather) registered in the Good Neighbor Program. Photo used with permission, also available on Instagram [7].

The deliveries, which at first included a lunch and relied on food donations from a few restaurants, now offer parcels with 10 or more products and 5 prepared meals, thanks to donations from various businesses and civil society organizations. Mercado says that the Good Neighbor Program currently delivers parcels to 100 ‘abuelitos’ per day, and 400 per week.

At present, the growth has been so great that “the Program is 100% sustainable” Mercado adds. By mid-May, they intend to be able to move towards 1000 meals per week. For Velutini, he expects “smart growth, rapid learning and adapting to changes” to be key tools in the Program's development process. Another key tool has been the use of social media — a resource that is widely used as an information alternative in Venezuela. [8]

Velutini believes that the Good Neighbor Program's presence on social media has created a “snowball” effect.  He recalls how members of the program would turn to social media to ask for donations at the outset, whereas now, social media users reach out to them offering useful products. The program has been made possible thanks to the coordination between the dedicated work of its members, the joint cooperation of Venezuelan society and the use of technology. An entire “co-production,” as Mercado describes it.

Despite being a spontaneous citizen initiative, the members of the Program follow carefully designed procedures to achieve its objectives. They receive information from neighbors about elderly people in situations of abandonment, which they must verify in order to register them in the database. After being located, they then talk with them about the Program and set out the routes to carry out the deliveries. If the elderly have families or someone who can help and buy food for them, then they are not eligible for the Program.

They have also developed another strategic option: appointing residents in buildings with a significant number of elderly people, who are responsible for delivering the “parcels” in order to reach more beneficiaries and diversify the tasks. What's more, as Velutini explains, the deliveries are made by following strict hygiene protocols under the guidance of a biosafety specialist, who told them to maintain physical distance, wash and carefully pack the food while also use gloves and masks.

Mercado and Velutini would like the Good Neighbor Program to transcend the COVID-19 pandemic and expand to other areas of the country.

Velutini sums it up in a spirit of hope and resilience:

From tragedy and chaos, wonders can occur.

Amidst an unprecedented global health crisis coinciding with the worst humanitarian crisis [13] the country has faced, it is undoubtedly a wonder for 400 Venezuelan ‘abuelitos‘ who are currently benefitting from the Good Neighbor Program.