Honduran congresswoman claims she was blocked from virtual plenary session

The claim sparks worries about censorship under confinement. 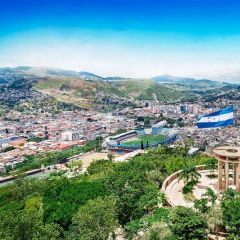 Montage made by Global Voices, depicting Congresswoman Doris Gutierrez and her screenshot image from Zoom.

Honduras has been under confinement and curfew since March 16 to slow the spread of COVID-19, forcing Congress to convene its parliamentary sessions virtually. Yet, some fear that the use of technology could undermine democratic processes, through sheer inefficiency or by premeditated malice.

On April 24, the legislative assembly convened a virtual plenary session through Zoom to discuss a number of issues related to COVID-19, among them approval for two new loans from the World Bank.

Congresswoman Doris Gutierrez, whose center-left Innovation and Unity Party (PINU) party has criticized the current government in the past for a separate spending bill, alleges that she was “thrown out” after entering the virtual meeting.

On Twitter, she explained that she believed her expulsion was deliberate:

“I feel surprised about the action being taken against your public servant, in which I was deliberately eliminated from the virtual meeting of the national congress plenary [session]. At the same time, [I] feel outraged by the discrimination I have been subjected to. But…they won’t shut me up.”

The video depicts her phone screen and the email she received with the notice “By instructions of Mr. President Mauricio Oliva, you are invited to the first Virtual Session.” Mr. Oliva is the President of the Honduran Congress, the equivalent to Speaker of the House in the United States.

The screen video goes on to show Congresswoman Doris Gutierrez attempting to join the virtual session and then displaying the following message: “Exit the meeting/You cannot rejoin this meeting because you were previously removed by the host.”

There are no updates on whether she could join the meeting later or whether the meeting was cancelled.

Doris Gutierrez, a lawyer turned congresswoman, represents the center-left opposition party Innovación y Unidad (Innovation and Unity Party) since 2014, although she had been part of other parties before. She considers herself a socialist, close to the ideals of the Catholic Church's social teaching and concern for social justice. She is known for “speaking her mind,” as her campaign slogan says “cero casacas”, loosely translated as “zero lies”, or “zero BS.”

A Twitter user responded to Congresswoman Gutierrez's claim, writing that these are “tricks” that “makes one think that the host eliminated you [from the conversation] because he does not want you to know something,” and that the meeting “should be annulled as it is not reliable.” Another person responded: “And that's how they agree to a budget of 75million [lempiras], these Narco Thiefs.”

On May 6, Doris Gutierrez tweeted again. This time, she worried that the country's controversial new penal code would enter into force on May 10 without a proper virtual plenary session to discuss her party's qualms with the new legislation.

A few days later, under heavy backlash on the new penal code said to alleviate penalties for corruption and drug-trafficking, Mr. Oliva accepted to make the new penal code come into effect on June 25, 2020, to leave more time for debates.

Good evening! We, the people at PINUD_HN are worried because there are no signs that they will call for a virtual plenary session at the Legislative assembly this week… What we understand from this is that they WILL DO WHATEVER IT TAKES TO MAKE THE PENAL CODE ENTER INTO EFFECT, THUS VIOLATING THE ARTICLE 188 OF THE CONSTITUTION

Honduras has a poor record on freedom of expression, transparency and democracy. Honduras ranks 146 out of 180 on Transparency International‘s Corruption Perception Index,148 out of 180 on press freedom according to Reporters without Borders, and 89 out of 167 on the Economist's democracy rankings. Since 2009's coup d'état which ousted democratically elected President Manuel Zelaya, and which was later tacitly supported by the United States, Honduras went through waves of social unrest amid high rates of poverty and corruption. In the past year, U.S. officials charged Tony Hernández, the brother of President Juan Orlando Hernández and Honduras’ former police chief Juan Carlos Bonilla Valladares alias “El Tigre” of trafficking tons of cocaine to the United States. People have been fleeing the country by the thousands.