Currently focused on an upcoming solo show scheduled for 2021 at the Ashmolean Museum in Oxford, UK, prominent Pakistani artist Ali Kazim says he hasn't experienced any significant changes to his work since the start of the COVID-19 pandemic. But he acknowledges that the art world will be hit hard as economies struggle or collapse in response to the virus that continues to impact almost every aspect of life across the world.

While Kazim works in a variety of genres and techniques, he has stood out for his portraits, which present realistically depicted subjects in surreal settlings against backdrops of powerful color.

Kazim’s works have been exhibited in major international fairs and exhibitions around the world, including New York’s Frieze Art Fair in 2019, and collected by New Yorks's Metropolitan Museum, the Asia-Pacific Museum, the British Museum, Australia’s Queensland Art Gallery, and others.

In an interview with Global Voices, Ali Kazim speaks about his fascination with the human body, the inspiration he takes from landscape, his current work and what we should know about art in Pakistan now. Excerpts from the interview follow:

You have a sort of fascination with the human body, from your body drawings in 2002 up to now. How has this influenced what art means to you?

I think the human body is such a fascinating form. It is complex both in its physicality and as a thematic concern. The body, which is core to performing everyday functions, keeps doing its tasks even most of the time without our conscious knowledge, while it goes through various emotional and spiritual stresses. The figurative works I’ve produced perhaps are glimpses of those moments it goes through.

Is there any connection between your work on the history of landscapes and the human body both in terms of the technique you use (painting-drawing) and the meaning of the work?

I wanted to make some portraits or images based on human figures. I wanted to start with my own explanations, but at that point I didn’t really know where to start until I came across a replica of the Priest King (a small, white, lo- fired steatite statue from the Indus Valley civilization) at Lahore museum.

That is probably the earliest example of a portrait that has survived in this part of the world. It gave me a reason to make sketches of it and then a portrait of the Priest King. I developed a new body of work from there. I wanted to create tales by placing one or two elements next to the portraits, whether it was a prayer cap, a parrot, or a shaving razor.

I fell in love with the watercolor wash technique. I was gradually discovering the possibilities of constructing the images by adding thin layers of colored washes, removing extra pigment from the surface and rendering it with tiny brushes. I guess in that way the formal aspects of the work became important for me.

In early 2013 I started visiting the excavated Harrapan sites near my hometown. The Ruins series landscapes are based on the mounds of the Indus Valley civilization. I think they are in a way collective portraits of the people who may have lived there. I was more interested in these sorts of historical connections. 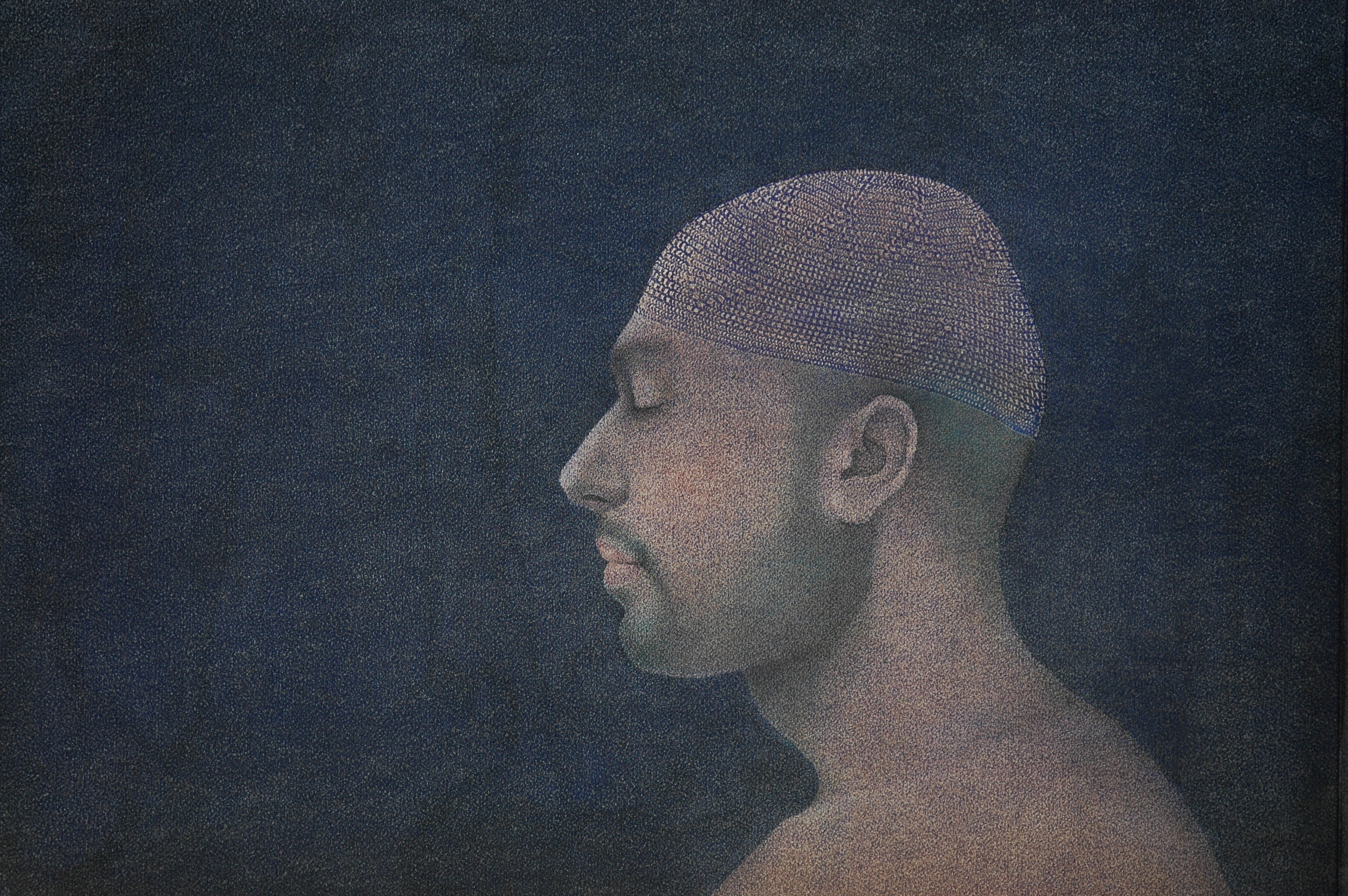 You have been very active internationally, exhibiting your work in major cities in the world and with museums like the Metropolitan acquiring your work. How is your work received by the art community in Lahore and Pakistan?

It’s such an honor that some prestigious institutions around the world have acquired my work over a period of time. I’ve been actively exhibiting in Pakistan since the beginning of my career. I was invited to make a large human hair sculpture/drawing for the first edition of the Karachi Biennale in 2017.

The project was appreciated well; I received the jury’s prize at the very first biennale of Pakistan. Then the next year for the inaugural edition of the Lahore Biennale I made a large installation called “Untitled (Ruins of the lovers temple)” in a public garden with five thousand life-size terracotta hearts.

Towards the end of the biennale, people were allowed to pluck hearts from the walls of the ruins. I later traced this and was surprised to see how people showed so much care for the fragile terracotta hearts they picked up from the site or gifted it to their loved ones. The project is living its new life.

My recent large-scale watercolor drawing “The Conference of the Birds” was exhibited last year in the Karachi Biennale and this year I did two projects for the Lahore Biennale, including a large installation of 3,000 unbaked clay birds at an abandoned brick factory. The installation lasted until the rain fell. The process of the clay birds turning to earth was very beautiful and poetic.

What is there about art in Pakistan that people in the world should know and look for?

Apart from contemporary art, the region has more to offer. There are fascinating cave engravings from the Paleolithic age in the north of Pakistan. The magical terracotta artifacts from the Indus Valley Civilization are amazing. The Gandhara sculptures, which truly are remarkable in their appearance. It’s hard to take your eyes off the Fasting Buddha at Lahore Museum. These Gandharan sculptures in many ways are the first examples of the earliest form of globalization.

It is fascinating to see how a new genre of sculpture developed when the Indo-Greek styles emerged. Then the Mughal miniature paintings are a visual treat. The two main cities, Lahore and Karachi, have successfully held two editions of the biennales each year since 2017. That has started a new era, with local people getting a chance to see some amazing works from Pakistani and international artists. This year the Lahore Literary Festival’s dates overlapped with the Lahore Biennale towards the closing week. Which artist/artists have had the most influence in your work?

There are many artists I admire very much. I am completely in love with Doris Salcedo, Kiki Smith, Louise Bourgeois, Cornelia Parker, Robert Gobber, and Vija Celmins’ work. I have just realized that most of my favorite artists are female. Their work is much informed, emotionally charged and very intelligently made with loads of patience. I think everything is there. They have produced immaculate works over the period of time.

My works on paper technique owe much to the Bengal School’s watercolorists. I’ve learned a lot by observing their paintings that are in public collections in Lahore, and have also seen some in Delhi.

Art schools don’t create/produce artists. If that's true, what’s the realistic expectation from such institutions regarding the artistic process of individuals who attend them?

I think art schools provide an environment where one tests ideas and talks about them with the fellow striving young artists. Some of them will continue studio practice; others will advance in related fields such as art writing, curation, galleries, art fabrication etc. They also can create their own circle of creative people while going to the school. Schools offer graduates the ability to showcase their best to the world and take chances. They get connected with the art world. These are important steps to practically enter the art world.