China to its anxious youth: ‘Believe us, things are better in your day!’

A propaganda video addressing the country's "back wave" triggered a backlash 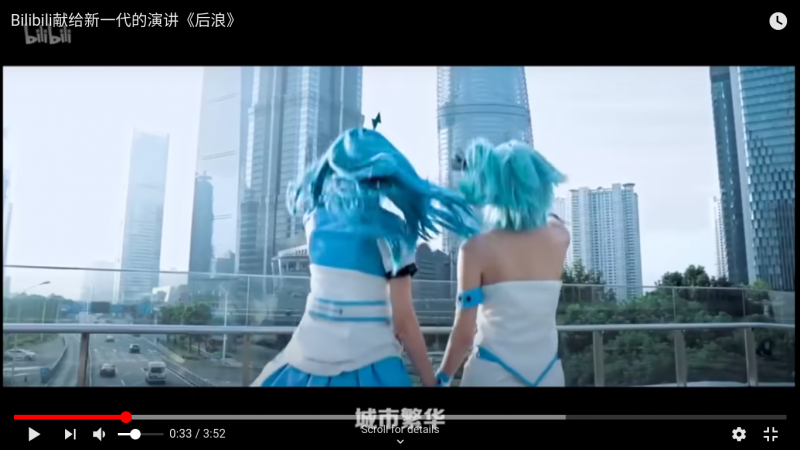 Chinese officials are keen to make the country's younger generation feel fortunate for what it has, and it isn't difficult to see why.

The post-90s generation is the least happy among all age groups in China according to research by the Chinese Academy of Social Sciences, followed by the post-80s generation.

While the Chinese Communist Party has been able to contain dissatisfaction among mainland youth it is wary of the example set by Hong Kong, which was roiled by months-long, student-led protests.

Step in actor He Bing, a representative of China's “Front Wave” (older generation) and the star of a viral video titled “Back Wave” (后浪) that aims to celebrate the supposedly free culture and bright future of China's youth.

Released on China's largest animated video sharing platform Bilibili in time for Chinese Youth Day (May 4), the video was republished by a plethora of state affiliated media outlets.

In the four-minute clip featuring footage of urban youth culture and adventurous, cosmopolitan lifestyles, actor He tells the younger generation:

Those who complain that the next generation is worse than the earlier generation should take a closer look at you, like I have. I look at you and feel envy. […] You can enjoy advanced technology, diverse culture and prosperous city life. The fruits of modern civilization have been unpacked for you. You have freedom to learn a language and a skill. You can enjoy a movie or travel far. Many of you began exploring your interests from a young age…you enjoy the kind of rights that we dreamed of — the right to choose. You love your way of living. You are lucky to meet the era, and the era is lucky to meet you. […] You have turned the traditional into the modern, the classic into the popular, the academic into the mass, the national into the global…Because of you, the world will love China more, because a country's most beautiful scenery is its young people…

They noted that the liberal, cosmopolitan culture depicted in the video was applicable only to a minority of young people, chiefly those who inherited wealth from the emergent business class (Capitalists), or politically powerful (Red) parents.

One typical comment on Weibo, the Chinese microblogging platform, pointed out that not everything is better for young people:

Actually we all wish that we are living in the time when when can still afford an apartment. Many people don't feel that they live like “back waves”…

The video's appearance on Bilibili — posted by the website itself — is notable.

The platform is considered China's most popular youth subculture website with 130 million monthly active users. Bilibi was listed on the U.S NASDAQ stock market in 2018 and is keen to rival more mainstream Chinese video platforms like Tencent Video. The majority of its audience was born after the 1980s and tends towards Japanese, Korean and American popular culture.

The China Communist Youth League established its official channel on the website in January 2017 and has been actively appropriating the youth community's subculture in its political propaganda ever since.

That move came amid the emergence of a new generation of online patriots, dubbed Little Pink, who boost state narratives and conflate freedom with the boom in consumerist culture.

State-owned outlets that republished “Back Wave” included the People's Daily and China Daily, while posts hailing the success of younger generations soon proliferated on Chinese social media, using the “Back Wave” hashtag.

But despite strong orchestration from party loyalists, the video triggered strongly negative emotions among some viewers.

According to a social media analysis report published by online media outlet The Paper, around half of the comments under the People Daily's republication of the video were negative.

Name-checked prominently in critiques of the video were “Chinese Chives” (韭菜) — a vegetable that grows like wild grass and can be harvested by farmers regularly without much effort.

Originally used as a metaphor for Chinese who kept losing money in the stock market, the “chives” moniker has since been used to describe ordinary citizens that live happily, despite lacking human rights and suffering exploitation.

The ‘Chives’ strike back?

Many users responding to the Youth Day video viewed themselves as part of a “Chives Wave”, rather than a “back wave”.

One tech blogger described the video as “poisonous Chicken soup”:

The wealthy ones are the back wave, the poor ones are “Chinese Chives”. Some said the video “Back Wave” is a declaration of youth. The content is rosy but not realistic, glorious but not touching. In reality, how many young people can afford to live like this? The content does not capture the general social reality. Criticism of “Back Wave” is a moment of awakening for Chinese young people — it is a resistance against “poisonous Chicken soup”.

A “Back Wave” parody soon went viral on Bilibili. It replaced He Bing's speech with a description of the “Chives Wave” — a generation that enjoys being exploited.

You have the rights that we have eliminated — the right to be exploited. You don't have the right to speak out. […] You are lucky to be in this era and Second Generation Rich are happy to meet you. They pay tribute to you, to you being naive and dumb. You have turned your own wealth into the wealth of your boss, turned the social into the capital, turned right into wrong and white into black. You have contributed bricks used for the construction of millions of overseas properties owned by the Second Generation Reds. You have contributed the oil used in the Benz owned by the Third Generation Reds who are racing outside the Forbidden City. You have turned your own bodies into 996 (9am to 9pm daily, six days per week) working machines which will eventually end up in an Intensive Care Unit.

Other parodies have emerged since, including this one about the Hong Kong protests for freedom and autonomy:

The debate surrounding the Youth Day video reminded some Chinese netizens to reflect on the genuine meaning of freedom and rights.

The production quality of Back Wave is excellent. We the youth have freedom to travel, but why are there no mentions of other freedoms? We the youth have the right to learn different languages — do we enjoy other rights? Youth in China has been locked up by properties and vehicles and does not care about politics. This is sad. We have to struggle for our rights, not sit there and wait. Youth in China should yell out — we want freedom of press!