A journalist is detained after mentioning the pandemic on Facebook 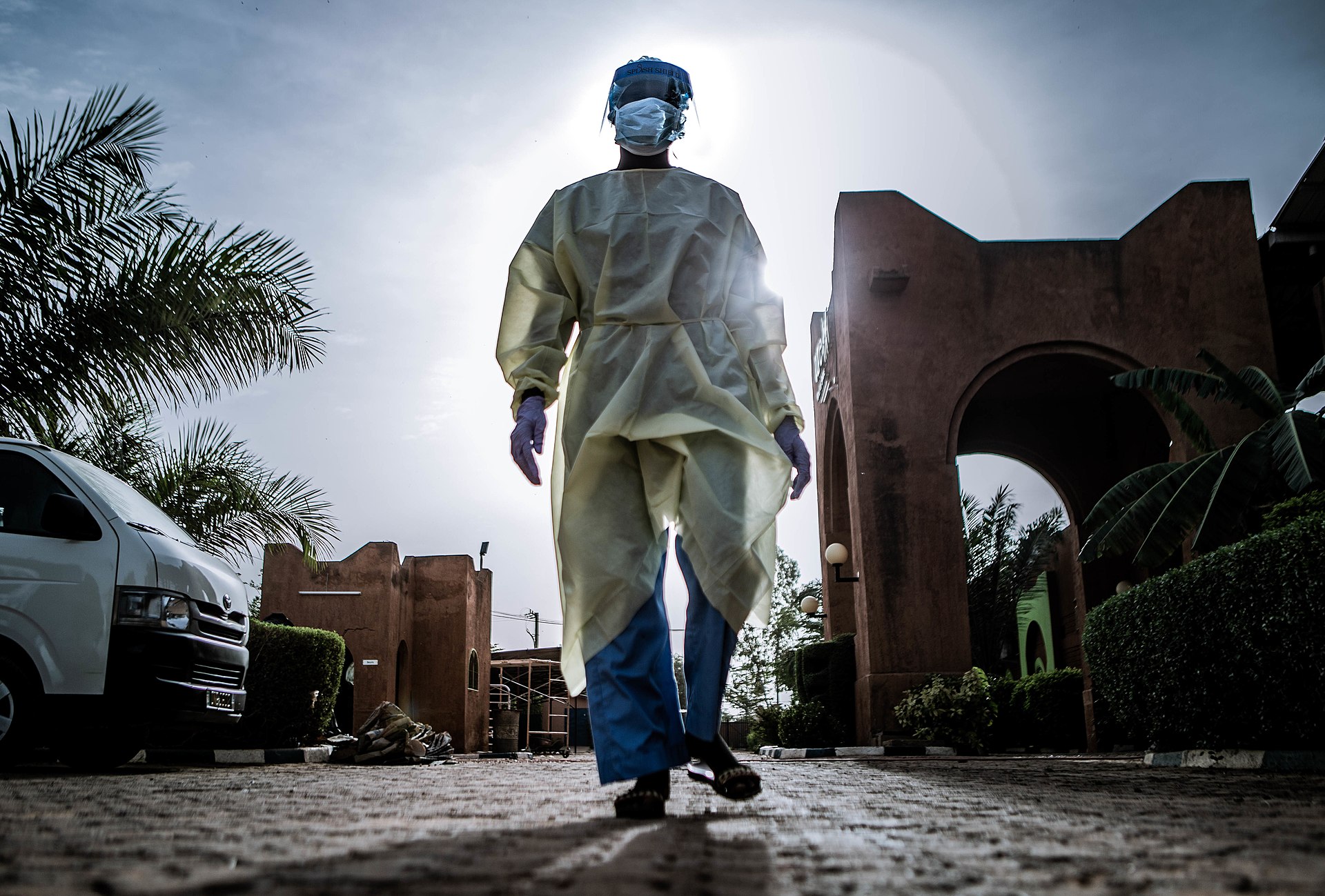 A nurse returns from testing patients at the entrance of a hospital in Niger, April 2, 2020. Photo by Anna.psiaki via Wikipedia CC BY-SA 4.0

Information transparency seems to be the best way to fight the COVID-19 pandemic — as demonstrated by Taiwan, for example — but the government of Niger seems to be expanding censure beyond journalists to whistleblowers and medical personnel.

This makes for an even more volatile situation in Niger, a country that is already under threat from Islamist extremism.

The first case of the virus in Niger was reported on March 19, 2020. As of May 8, there are now 781 cases reported, including the death by COVID-19 of the Nigerian Labour Minister on May 3. Despite the clear presence of COVID-19 in Niger, the police detain doctors and journalists whose only “crime” seems to be the mere mention of the virus in interviews or on social networks, as decried by the human rights organization Amnesty International:

On March 14, the judicial police summoned the editor-in-chief and a journalist from Television Labari, following an interview with veterinarian Zoulkarneyni Maiga, concerning COVID-19. Dr. Maiga was also summoned and later released on the evening of March 16. Amnesty International was able to obtain video of the interview, in which he simply speaks about the origin of the virus, explains the steps in its development and asks the public to apply preventive measures.

Another journalist, Kaka Mamane Touda, has been arbitrarily detained since March 5. He had published a Facebook post calling attention to another possible case of COVID-19 in Niger.

According to Reporters Without Borders, Niger comes in 57th place in the World Press Freedom Index and in 10th place for Africa. This is a respectable position in the Pan-African context since this Sahelian country is the target of Islamist extremism.

However, it seems that the government is becoming less and less concerned with its image as it multiplies the arrests of human rights activists, journalists, and whistleblowers.

A recent victim of Nigerien censorship is activist Ali Idrissa. He knows Nigerien prisons well, having already been arrested in 2005, 2017, and 2018. As the coordinator of the Network of Organizations for Transparency and Budget Analysis (ROTAB), a Nigerien collective of several nonprofits, nongovernmental organizations, and unions that participate in the global “Publish What You Pay” campaign, he does indeed seem to displease authorities.

Idrissa is also a member of the framework for cooperation and action in civil society and the general director of the press group Labari. Following a complaint linked to defamation charges, he was held in police custody between April 9-14, 2020.

This period exceeds the legal duration of police custody in Niger, where it is limited to 48 hours and perhaps one renewal. It also runs contrary to the Ministry of Justice’s March 20 decision aiming to curb police detention during the COVID-19 pandemic.

Mr. Idrissa was granted provisional release at the end of the hearing. … Mr. Idrissa was arrested in connection with revelations of the alleged embezzlement of funds initially intended to equip the Nigerien army in the fight against terrorism. The Observatory noted that in the same context, a peaceful protest was violently repressed on March 15, 2020, in Niamey, [the capital] and numerous people were arrested, including defenders of human rights.

Though Idrissa was released on April 14, 2020, other members of civil society who were arrested at the same time are still being held. On March 31, the framework for cooperation and citizen action published a press release saying:

As you know, the only misdeed of these honorable sons of the nation who are today imprisoned is to have organized peaceful assemblies not only in support of the FDS [security forces] in the ever so dangerous combat that they lead against terrorists, but above all to demand the judicial handling of the extraordinary case of predation of public resources allocated to the Ministry of Defense. This intimidation will not work! the citizens’ struggle must and will continue its tireless efforts.

The struggle will continue, even as we are faced with the new and difficult test imposed upon us by the necessary, collective fight against the murderous CORONAVIRUS or COVID-19 pandemic.

In an article published on 18 April, the website nigerdiaspora.net reports:

Other arrests followed. Just as voices rose to demand the release of these civil society actors, incarcerated since March 19, other [arrests] of activists and civil society actors were made in the last two periods of 24 hours. Among them were Dr. Mallah Toudjani and Nassirou Saidou, president of the nonprofit organization, Voice of the Voiceless. Dr. Mallah Tidjani was arrested for audio attributed to him and which made the rounds of WhatsApp groups over the last 48 hours. In this audio clip, he speaks about the management of the covid 19 pandemic. For Nassirou Saidou, who has been under arrest since last Tuesday March 14, an audio clip is also at cause.

Nigerien civil society reacted strongly to the embezzlement of funds intended for the purchase of arms, refusing to see the future of its country mortgaged and to stand by while its military battles better-armed Islamist extremists. In a press release by Turn the Page Collective Niger, Issa Garba, communications manager, writes:

After the Ministry of Defense financial audit revealed major embezzlement of funds intended for military supplies, civil society was mobilized. They condemned those responsible for the embezzlement and demonstrated their support of the Security and Defense Forces, who are the primary victims and find themselves deprived of quality military equipment in wartime.

It is quite clear that the Nigerien government did not succeed in managing the crisis of this pandemic, as described in the report, “When anti-terrorism justifies the restriction of civic space,” from the same Turn the Page Collective Niger, which noted on April 24:

Today, the freedoms of demonstration, assembly, and speech are truly endangered, flouted by the unelected administrative authorities of various municipalities in the country. As the security situation in Niger deteriorated, the administrative authorities prohibited more and more demonstrations organized by civil society [OSC]. On multiple occasions, even meetings in private locations were prevented without any real justification.

Indeed, the strong-arm break-up of a demonstration in Niamey caused three deaths in early March. Amnesty International asked authorities to open an independent inquiry into the circumstances of their death.

Furthermore, the Anadolu Agency warns that several neighborhoods in the Nigerien capital of Niamey were rocked by demonstrations.