And comparisons abound about a ruthless new enemy 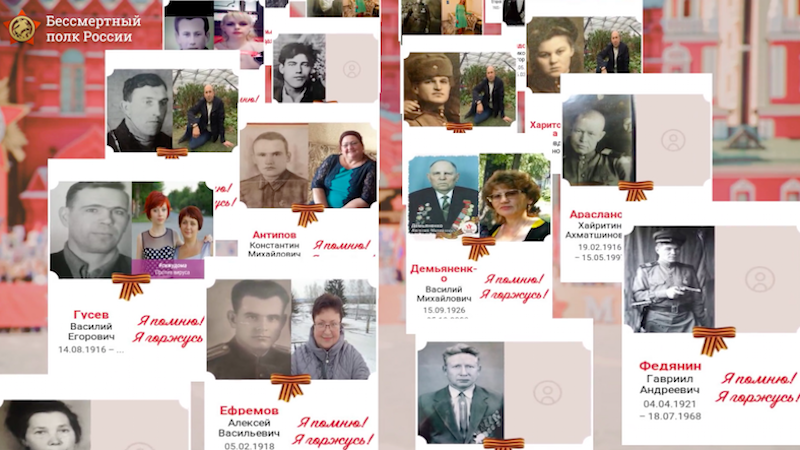 The COVID-19 pandemic has hit Russia hard, with over 10,000 new cases confirmed every day. At the time of publication, the Johns Hopkins University online map indicated 221,000 confirmed cases in the country. Strict quarantine measures were announced on March 5 and have been extended several times since.

Following much speculation, on April 17 President Vladimir Putin did the unthinkable — and cancelled a large military parade for Victory Day, celebrated every May 9 to commemorate Nazi Germany's capitulation in 1945. Russia's latest military hardware and soldiers in period uniforms were to parade past the Russian leadership, Second World War veterans, and several foreign dignitaries.

A day of fervour

That Putin appeared to delay for some time before postponing the parade and other public events is testament to the immense importance of Victory Day in modern Russia. On the other hand, the fact that even veterans’ organisations had asked him to call off the parade demonstrates the level of worry about the COVID-19 pandemic.

As the sociologist Mischa Gabowitsch noted in his recent essay for Eurozine:

In Russia, surveys document the increasing importance of Victory Day. Between 2010 and 2018, the number of those who named it as one of the three most important holidays went from 38% to 71%, overtaking New Year’s Day and religious festivals such as Easter or Christmas.

Cancelling Victory Day celebrations was a major disappointment, particularly as this year marked 75 years since the Soviet defeat of Nazi Germany. The traditional military parades and immortal regiment marches were cancelled across the country; instead, President Vladimir Putin laid flowers at the Tomb of the Unknown Soldier in Moscow to an audience of government officials and reporters. The opening of an immense new Cathedral of the Armed Forces outside Moscow, which had been scheduled for Victory Day, was also postponed (the building achieved notoriety when it was discovered that one of its many mosaics featured depictions of Putin, Minister of Defence Sergey Shoigu, and other security officials. According to some reports, the mosaics were later removed.)

Meanwhile, 75 military jets staged a flyover above the Russian capital, and the day concluded with a traditional fireworks display. “We are invincible when we are united,” declared the president.

Nevertheless, a handful of Russians broke ranks by attempting to hold public celebrations themselves. On the afternoon of May 9, several Communist Party (KPRF) deputies from the Moscow City Duma were detained by police when staging a Victory Day rally in the capital's Pushkinskaya Square. One participant protested to newspaper Novaya Gazeta that they intended to comply with social distancing regulations. The local governor claimed that 880 residents of Yekaterinburg, a major city in the Ural region, had been fined that same day for violating the quarantine regime. Several had attempted to hold Victory Day marches or attend commemorations.

May 9 is no less important in other post-Soviet states, which have cancelled planned parades and public events. The only exceptions were neighbouring Belarus, where President Aleksandr Lukashenka, who referred to COVID-19 as a “mass psychosis,” held a mass rally anyway where 4,000 troops marched in front of crowds of spectators. Turkmenistan also marked Victory Day with a parade; the country's opaque government continues to claim that there are no coronavirus cases.

Lukashenko at WW2 parade: "In this insane, disoriented world, there will be people who condemn us for time and place of this sacred act… Don't rush to conclusions or condemn us, descendants of victorious Belarusians. We couldn't have acted differently. We had no other choice." pic.twitter.com/EUdxloxvQv

Several ubiquitous symbols of Victory Day are more recent creations, popularised as the festival has gained prominence in Russian public life. The Immortal Regiment processions, in which thousands of Russians take to the streets holding portraits of ancestors who fought in the war, was first launched as a local initiative in Tomsk in 2012, while the orange and black St George's Ribbon were first distributed en masse in 2004-5. The latter have also come to be associated with patriotic initiatives and support for the authorities.

Therefore, the day is both an opportunity for ordinary citizens to launch grassroots commemorations and for the government to burnish its credentials with Russia's public and enjoy a surge of patriotic fervour.

Remembering on the RuNet

Faced by these restrictions, the Russian public turned towards the RuNet to commemorate Victory Day — with a little encouragement from the state. Alongside the standard hashtag #ДеньПобеды (#VictoryDay), Russians also shared their thoughts with the hashtag #ДеньПобедыВстречаемДома (#WeCelebrateVictoryDayAtHome). In a gesture reminiscent of Italians clapping for medical staff from their balconies, Russians went to theirs in unison to sing a popular Soviet-era Victory Day song by David Tukhmanov (giving rise to the hashtag #ОкнаПобеды, or “windows of victory”, and #ПоёмДвором, or “the courtyard sings”).

Moscow's city authorities launched a “virtual tour” allowing users to “visit” historically significant locations in the Russian capital and learn about the role they played during the war. The initiative was linked to the Russia-wide Eternal Stars app, in which mobile users can move from historically significant locations around the country and test their knowledge about the war in an online quiz about each location.

Online historical resources such as these aren't unusual. Recent years have seen several high-profile attempts to “digitise” popular engagements with history, the most prominent among them being Russian journalist Mikhail Zygar's “future history” series. Zygar's latest creation is The Real 1945, social media retelling of the Red Army's advance into Germany. All social media “posts” are based on real archival and diary materials from the period (Zygar previously tried the same approach with an online retelling of the Russian revolution, supported by digital giant Yandex).

The most noteworthy new initiative was the online Immortal Regiment, hosted on the website 2020.polkrf.ru. Instead of marching on the streets with a placard, users uploaded images of themselves alongside an ancestor, which then cycled past the viewer in a live feed of a virtual “procession.”

The initiative was widely praised by state media, which claim that this year's Immortal Regiment set a historic record, with three million people “attending” the online march across the country:

The Telegram user SuevernayaDemokratiya (“Superstitious Democracy”, seemingly a pun on the concept of Sovereign Democracy) noted that these initiatives reflected the deep commitment towards May 9 from above and from below, and predicted that they could grow into new forms of commemoration:

Although people couldn't gather in the squares and streets, they went onto their balconies to sing songs, they lit lanterns, shared their emotions and feelings on various websites, and took part in the Immortal Regiment online. This day will be remembered for the large number of earnest new initiatives and acts which could well develop into new traditions for Victory Day. The same “windows of victory” or “singing in the courtyards” could easily be repeated next year without any self-isolation measures.

So it's great when a festival is observed and celebrated, but a festival really lives on when new generations make it their own. We remember the great struggles of our people, and this damned Chinese infection will not break us. This is our own victory in a war against an unseen enemy.

Comparisons between the struggle against the coronavirus and the German invasion are widespread — it's the most resonant historical parallel in Russia today. In March, Metropolitan Tikhon of Pskov said that the world was facing “a third world war, 75 years after the second.” 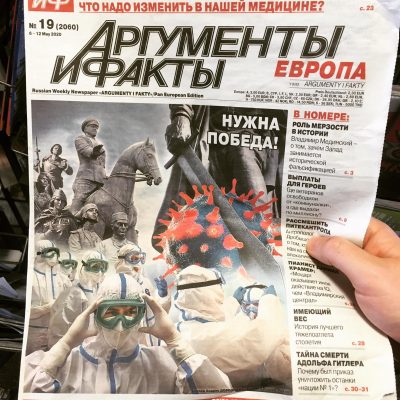 The Soviet soldier statue in Berlin's Treptower Park slices the coronavirus; Marshal Zhukov orders a legion of doctors. The front cover of the European version of Russian tabloid Argumenty i Fakty, May 9, 2020. Photo (c): Maxim Edwards.

Understandably, veterans have drawn on their experiences during the Second World War when discussing the COVID-19 crisis. Zinaida Korneyeva, a 98-year-old veteran from St Petersburg, has shot to fame with a series of YouTube videos in which she reminisces about her wartime service as an anti-aircraft gunner. Inspired by the example of British veteran Tom Moore, Korneyeva has launched a crowdfunding campaign in support of medical staff infected with COVID-19. To date, she has raised over 1.5 million rubles for her cause.

Many Russians expected to hear these parallels in Putin's Victory Day speech, given the president's fondness for historicising Russia's current woes. On April 8, for example, the president reassured a group of regional governors that Russia would overcome the coronavirus, just as it survived invasions by the Pechenegs and Polovtsians.

However, other than a few appeals to resilience and collective support, Putin instead chose to focus his May 9 speech on the events of the Second World War, making no explicit statements about the pandemic his government is desperately trying to contain.

Russia is not alone in appealing to martial valour in urging public vigilance against the coronavirus. In the UK,  “Blitz spirit” rhetoric has not returned to public life without criticism.

But as in other countries, experts question the accuracy of doing so and what it might obscure about the effectiveness of state responses: as the psychologist Olga Makhovskaya told Radio Svoboda on May 9:

The militarist rhetoric used when speaking about doctors these days is demagogic. It sugar coats a discussion about the actual problems they face. I was enamoured by a statement from an exhausted young doctor who said: “Do not call us heroes.” The biggest problem they face, apart from a threat to their lives, is their stigmatisation in society. Some groups are hailed as heroic, superior, people deserving of honour and respect, while others are sickly and potential carriers of disease. Doctors themselves object to this; for them it is important (even within the medical profession) to stay united. Everybody is equal, and doctors can replace each other. The rhetoric of solidarity is not about militarism, it's about equal labour. […] A pandemic is a natural disaster, and must be stopped according to the laws of crisis management, not the laws of war. War has an enemy, a discrete ideology. There are more favourable prospects here. And now, most importantly of all, there is a struggle for the future. And the question being asked every day, from dawn until dusk is: when will it come to an end?

Tragically, this is not just a metaphorical struggle; some Russian soldiers today are reportedly fighting the coronavirus for real.

When journalists from the Perm Zvezda news outlet reported that the local government had cancelled Victory Day parades because of cancelled orders of fireworks and St George's ribbons, the local authorities denounced their findings, leading Russia's state media watchdog Roskomnadzor banned the offending article. Three weeks later, the parade in the city was actually cancelled.

During this period, preparations for a Victory Day parade in Moscow's Red Square were still being held — according to the independent investigative project Proekt.Media, thousands of soldiers came to Moscow for parade rehearsals, after which hundreds of them actually became ill from the virus.

Russian officials are determined that the 75th anniversary of the Soviet victory will be celebrated with the appropriate fanfare. Two dates have been proposed for a belated Victory Day parade: September 2 (recognised as the formal date of the end of the Second World War), or November 7 (the anniversary of the October Revolution).

Whether that can happen, of course, depends on whether the current struggle is won by autumn.