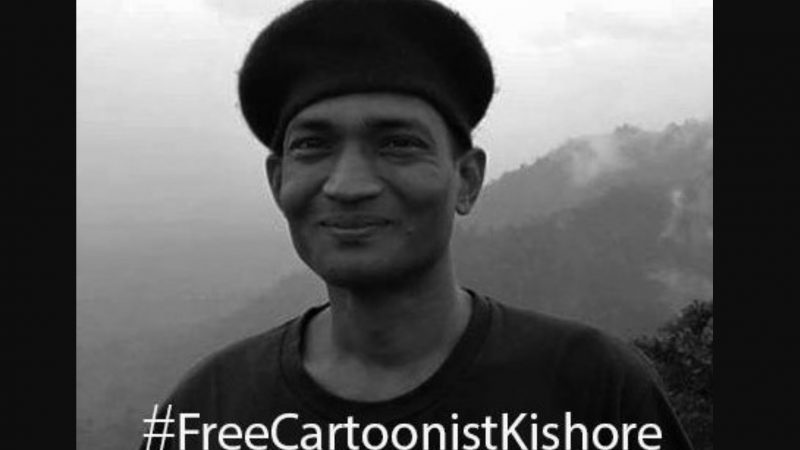 As if the danger of the Covid-19 infection is not the primary concern of Bangladeshi citizens, criticism of the government and the country's politicians is becoming increasingly dangerous for them. During the first week of May 2020, authorities arrested four people and charged seven others [3] for their social media posts and cartoons criticizing the government’s response to the Covid-19 pandemic.

There has been criticism of the government's lack of preparedness and lack of transparency, management, coordination [4] to deal with the pandemic. Until May 11, 15, 691 people [5] have been infected with the novel coronavirus in Bangladesh and 239 people died.

The four individuals who were arrested were cartoonist Ahmed Kabir Kishore, writer Mushtaq Ahmed, activist Didarul Bhuiyan, and businessman Minhaz Mannan. They were all arrested [6] under the Digital Security Act (DSA).

According to the First Information Report [9] (FIR) the charges against them include: [3] “knowingly posting rumours against the father of the nation, the liberation war, and the coronavirus pandemic to negatively affect the nation’s image.”

Would it be wrong if someone says that the authorities in #Bangladesh [10], equipped with Digital Security Act, launched a crackdown on those critical to the government?

Eleven people were charged with “spreading rumors and carrying out anti-government activities” yesterday!

In the same lawsuit, similar charges were brought [3] against seven people including expatriate journalists, a Facebook page admin and social media commenters. According to a BBC Bangla report [12], more than 50 people have been arrested for spreading rumours about the spread of coronavirus in Bangladesh since March this year.

These arrests and prosecutions represent a serious threat to freedom of expression in the country during the time of the Covid-19 pandemic. “It is only an insecure and authoritarian government that uses a pandemic to arrest cartoonists, journalists, and activists,” Brad Adams, Asia director at Human Rights Watch, said.  [13]

‘A lack of tolerance’ to criticism

Since the beginning of the health crisis, the Bangladeshi government has maintained that they are well prepared [14] to deal with the coronavirus. But shortages in Personal Protective Equipment (PPE) [15] for healthcare workers and an N-95 mask scandal [16] brought to the fore the government's mismanagement of the crisis. Moreover, the government's labelling of the lockdown as a ‘general holiday [17]‘ sent mixed messages to the public leading to confusion. The latest decisions to reopen garments factories [18], restaurants and markets while the infection is still on the rise has been widely criticized [19] across the country. Many activists think that journalists and activists are being sued or arrested to create fear in the minds of the people to stop criticism of government mismanagement.

Talking to BBC Bangla [12] in early May, Kaberi Gayen [20], a professor of the Department of Mass Communication and Journalism at the University of Dhaka, said:

When does it happen? There is such a lack of tolerance that they (the government) are not able to take any criticism. Whenever anyone disagrees, a case is filed and they arrest them.

Vidyut, an engineering student, tweeted that criticism of the government does not mean opposition to the state:

State and government are different. Being critique of government doesn’t mean they are against the state. It’s a shame that the government is not differentiating between them like most of the autocratic states.#Bangladesh [10]#dailystarnews [21]https://t.co/Carhduz4Xd [22] 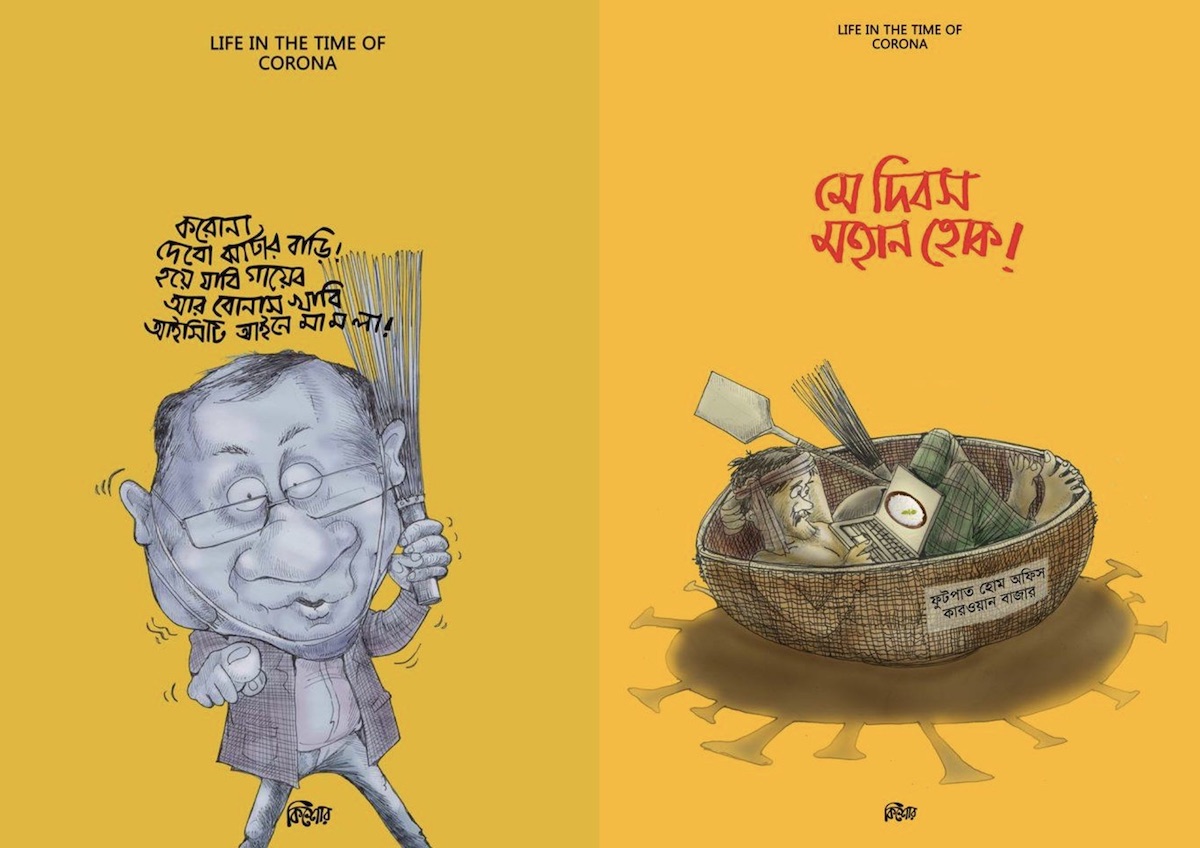 Collage of cartoons of Kishore. Used with permission.

Cartoon on the left - ”Don't (In Bengali Korona means don't)! (If you do) Will beat you with brooms, you will disappear. And we will sue you under the Digital Security Act as a Bonus.”
Cartoon on the right – ”May Day is great!” (In Picture, one day labourer without work is resting and browsing on a laptop, inside his bucket with a sign “Footpath home office, Karwan Bazar”)

People in the talk shows in the television directly and nakedly criticize the government for its policies and underperforming ministers from time to time, and compared to what they say and how they say, the cartoons of Kishore are just symbolic depiction of present realities, which can be coined with different explanations.

If the government's mechanisms are not directed to allow this sort of space to the citizen, it may be a direct violation of freedom of expression at a gross level.

On Facebook [27], Belayet Hossain Mamun thinks that any sort of criticism of the state is becoming risky for a person:

I am getting a message like this everywhere: “it is risky for a person to criticize the state affairs; it can hurt you.” What a sad degradation of freedom of speech.

Arrests under the Digital Security Act are on the rise

According to the UK-based freedom of speech organization Article 19, the number of cases and arrests under the Digital Security Act of 2018 has increased [28] in Bangladesh. From January 1 to May 7, 60 cases were registered. More than 110 people, including 22 journalists, were arrested in these 60 cases during the same period. In 2019, there were 63 cases under the Digital Security Act across the country.

Read more: After disappearing for 53 days, Bangladeshi journalist is found and sent to jail [29]

In 2018, the Digital Security Act [30] was passed in Bangladesh replacing the notorious Information and Technology Act [31], which was also used as a tool for silencing critical speech online. There were strong criticisms [32] of this new law from the beginning.

Leftist political activist Feroz Ahmed [34] writes that freedom of speech in Bangladesh has never been so hampered:

I don't think freedom of speech has ever faced so many obstacles in the history of Bangladesh. There is nothing to blame individuals for specifically. If the people's organizations are not strong, the culture of speaking will remain as the personal courage of some, it will not become a normal habit of society.

Meanwhile, the government has issued a circular [35] for its officials requiring them to refrain from uploading, commenting, liking or sharing posts, pictures, audios or videos that tarnish the image of the government or the state through social media. Earlier, on 18 April 2020 the government's health department also directed [36] doctors and nurses not to speak to the media or social media about the coronavirus crisis.

Although the government has been saying [12] from the beginning that digital security laws have not been enacted to harass anyone but to protect people from harassment and rumours. However, the reality is very different.