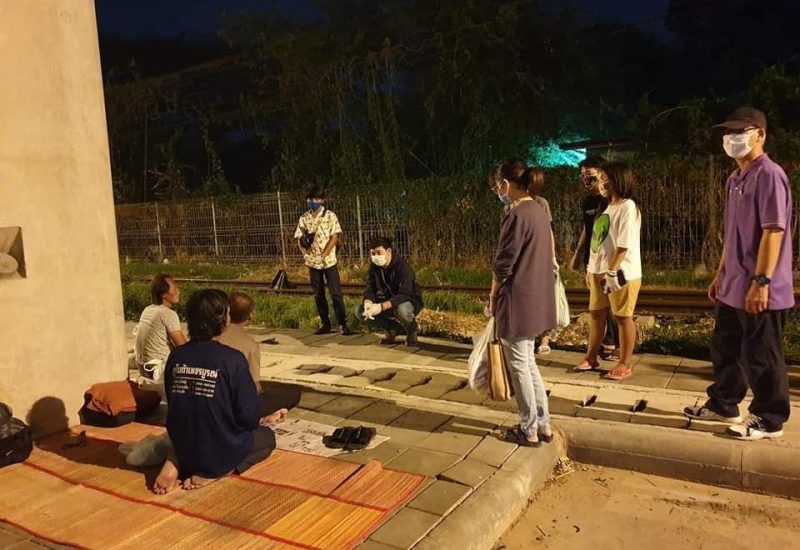 Members of Friends of the Homeless, along with local government officials, visiting homeless people in Khon Kaen City. Photo and caption from The Isaan Record

This edited article by Weerawat Somnuk is from The Isaan Record, an independent news site in Thailand, and is republished on Global Voices as part of a content-sharing agreement.

Homeless people in Khon Kaen, a city located in northeast Thailand are one of the most vulnerable groups among the urban poor, as a 2018 study from Khon Kaen University found. How are these people dealing with the COVID-19 outbreak, and what measures is the government taking to protect the most vulnerable members of society?

According to the Khon Kaen Protection Center for the Destitute, there are 83 homeless people in the city. But the COVID-19 pandemic has pushed many people out of their jobs and onto the streets, making it difficult to estimate the actual number of homeless people. The Thai Chamber of Commerce predicted in March 2020 that the current crisis might leave more than seven million people unemployed, or nearly ten percent of Thailand's total population.

Nattawut Krompakdee, a coordinator at Friends of the Homeless, a charity group, remarked that:

Homeless people are probably less at risk of COVID-19 infection, compared to other groups of people because they don’t meet many people on a regular basis. Also because of their personality: they don’t usually mingle with other people. But if one of them gets infected, there is a high chance that the virus will spread among other homeless people.

Friends of the Homeless, and various government agencies, such as the Social Development and Human Security Office in Khon Kaen and the Khon Kaen Protection Center for the Destitute, have been distributing food and other necessities to homeless people and informal workers in the city.

The Khon Kaen railway station has become a gathering spot for many homeless people in the city. Many of them used to live in slum communities along the railway tracks. But in 2016, the State Railway of Thailand (SRT) demolished many of the houses as part of a double-track rail project.

Unlike the middle class, the homeless and low-income groups often lack basic access to information on how to protect themselves amid a public health crisis, Nattawut notes:

They don’t have access to tools that can prevent them from getting COVID-19, such as masks, hand sanitizer, clean water, and even a place to quarantine themselves.

Their lives have also been affected by the government’s measures to prevent the spreading of the virus. The Khon Kaen governor ordered a temporary closure of entertainment venues, schools, theaters, and other venues on March 18, bringing much of the city’s public life to a standstill. Nattawut explains that:

Flea markets, fresh markets, supermarkets, and small enterprises are a main source of income for homeless people. When those places closed or cut jobs, informal and day laborers lost their income and ran out of food for themselves and their families.

Sonsiri Wippraset, a 25-year-old native of Udon Thani in the northeast of the country, has been sleeping in the area since he was laid off from his job as an air conditioning technician in Bangkok. He only had enough money for a train ride to Khon Kaen.

He explains that he does in fact have a house in Udon Thani, but due to family problems, he decided to stay in Khon Kaen where he has found a community of homeless people who share a similar fate.

Despite becoming friends with other homeless people, Sonsiri still hasn’t learned what aid the government is providing to those affected by COVID-19. Although he would like to register to receive the 5,000-baht [156 US dollars] compensation money, he doesn’t have any information on how to do so:

Since I didn’t have enough money to go home, I decided to become a homeless person and stay here.

I had never heard of COVID-19 before. I just learned about it in the news but I don’t know what the symptoms are like. I’m scared. I protect myself by wearing masks that are being handed out, but sometimes I don’t wear one because it feels uncomfortable.

I don’t have an ID card right now. I don’t know how I lost it, and the homeless people in this area have not heard of this policy. Right now we want to survive by getting a job.

The Khon Kaen municipality has been working to address the needs of homeless people in the city for a few years. Pongsapat Saengpitoon, an official of the Social Development and Human Security Office in Khon Kaen, says the city has a policy to look after vulnerable groups to make sure they are not left behind in the COVID-19 pandemic.

We have a project in collaboration with the private sector called, “Pun Kun Im, which brings high-quality, clean, and safe food to homeless people and those who have lost their jobs due to the coronavirus outbreak every Monday at the Khon Kaen railway station.

There are also two homeless shelters in the city. One is run by the Protection Center for the Destitute under the Ministry of Social Development and Human Security and another one is Ban Home Saen Suk, managed by the private sector and capable of taking in about 100 homeless people.

Khaek, a 52-year-old woman, is one of the residents of the shelter of the Protection Center for the Destitute. She used to live on the streets before the shelter took her in.

The center usually allows people to stay for no more than 15 days, as it can only accommodate 10 to 15 people. But since Khaek is sick with breast cancer, she has been allowed to stay longer.

I have to undergo treatment at Khon Kaen Center Hospital once or twice a month. There, I noticed that the staff were very strict in detecting COVID-19, so it made me more alert.

Currently, there are eight people staying at the center, says Chansak Khukhirikhet, one of the shelter’s staff. Residents are urged to wear face masks, maintain one to two meters distance from each other, and avoid touching in order to prevent the spreading of the disease.

Apart from local projects in Khon Kaen, the Ministry of Social Development and Human Security has implemented measures to help people affected by the virus outbreak under a program called, “No Thai Left Behind.”

The program provides accommodation with free meals for people who are unemployed and have no place to stay, especially during the 10 p.m. to 4 a.m. curfew. Those wishing to use this service are encouraged to contact a hotline for more information.