As tourism declines in Cambodia, tuk-tuk drivers are down and out in Phnom Penh 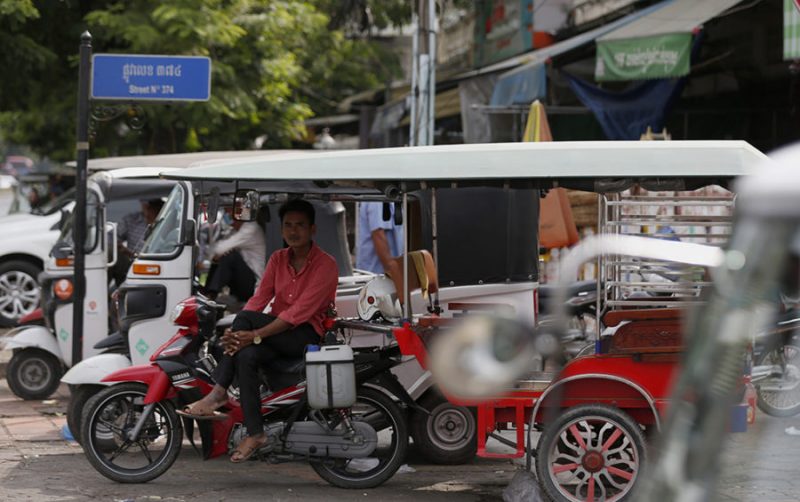 A driver sits in his tuk-tuk, awaiting clients at Deumkor market in Phnom Penh on April 23, 2020. (Photo and caption by Panha Chorpoan/VOD)

This edited article by Taing Keoratanah is from VOD News, an independent news site in Cambodia, and is republished on Global Voices as part of a content-sharing agreement. Translated from the original article on VOD Khmer

When Poeun Da abandoned his job at a Phnom Penh garment factory to drive a tuk-tuk (a three-wheeled auto rickshaw) in 2019, his 3,000 US dollars investment in the vehicle seemed to pay off. Da said he could earn at least 100,000 riel ($25) a day, and between $500 and $600 a month, ferrying locals and tourists through the capital via mobile ride-hailing apps.

That was the case until mid-March when the COVID-19 pandemic made its way to Cambodia — with confirmed cases rising from one to more than 100 — and dealt a blow to his livelihood. Now, he earns anything between $2.50 to $5 a day, as he explains:

It’s really hard, bro! To be frank, in one day, [I get] only one ride. Today, from morning till night, I had only one ride, and I need to pay to the [ride-hailing] company and some for gas.

Tuk-tuk drivers like Da are losing their income as tourist arrivals to Cambodia have plummeted, and residents decide to stay home. At the same time, informal workers are largely excluded from the limited social welfare that formal workers have access to during the economic slowdown.

Cambodia has recorded 122 cases of COVID-19 since January, with almost all the patients having recovered and left quarantine. The Health Ministry has not reported any new coronavirus case since April 12, and no deaths linked to COVID-19 have been confirmed.

But globally, more than 3 million people have contracted the virus and over 210,000 deaths have been counted, according to the World Health Organization, with many nations restricting travel within and through their borders.

Cambodia has ordered a travel ban on people coming from Spain, Italy, France, Germany, the U.S. and Iran. The government has also closed schools, cinemas, museums, nightclubs and gyms, and temporarily banned religious events as well as other public gatherings.

Though most Phnom Penh stores, coffee shops and restaurants remain open for business, tuk-tuk drivers say people are going out less frequently since restrictions were established in March.

Vorn Pao, president of the labor group Independent Democracy of Informal Economy Association (IDEA) says informal workers like taxi and tuk-tuk drivers have faced a sharp fall in income since the novel coronavirus hit Cambodia because of their inconsistent work and looming loans that many take to buy their vehicles.

If the virus and its economic impacts persist, Pao says drivers may feel forced to abandon their jobs in the capital, and return to their provincial homes.

At his vehicle trade shop in Stung Meanchey commune, Ry Silay says he would still buy tuk-tuks in good condition, but at a price that is $200 or $300 less than the vehicle’s value before the pandemic. However, Silay admits that he has not bought any tuk-tuks in the last two months:

The difference between [the number of] buyers and sellers is big. There are five, six or seven [drivers who want to sell their tuk-tuk] a day, but there are almost no [buyers] in a day, maybe one or two, so we cannot sell.

Hout Ieng Tong, president and CEO of microfinance lender Hattha Kaksekar Limited (HKL), explains his company would help clients who work as tuk-tuk drivers, noting that the National Bank had urged microfinance institutions to offer borrowers some relief because of the impact COVID-19 has had on their jobs. 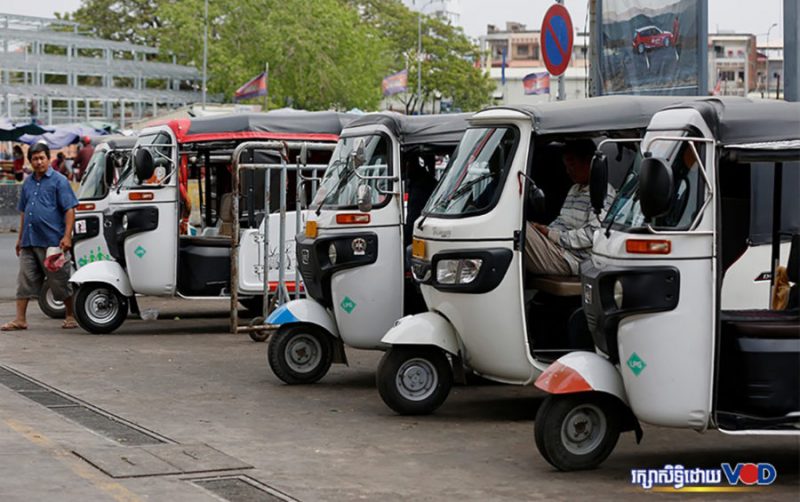 LPG-powered tuk-tuks sit parked in a line, with drivers awaiting customers in Phnom Penh on April 23, 2020. (Photo and caption by Panha Chorpoan/VOD)

No tourists to transport

As Cambodia’s economy was beginning to feel the impact of the global recession, Prime Minister Hun Sen said in early March that tourism would be one of the sectors most impacted by the pandemic.

Civil Aviation Secretariat spokesman Sinn Chanserey Vutha told reporters in April that international visitors decreased​ by 20 percent in January, and 50 percent in February, and then by more than 70 percent in March and by 90 percent in April.

Parked outside the Phnom Penh International Airport, Mao Yorn, a 40-year-old driver, explains he could generally earn $25 a day by chauffeuring tourists and others using the litany of available ride-hailing apps. The income was sufficient to repay $300 per month on his $5,000 loan from Cambodia Post Bank.

Today, as a whole from morning till night, I have not provided one service, and tomorrow, I’m not sure whether one will come or not. Finding a construction job is probably better.

In an April report, the World Bank projected that the poverty rate among Cambodia’s hospitality workers — including transportation, tourism and restaurant staff — could jump to more than 20 percent if the sector’s average income is cut in half for two quarters. It also warned that the impact on informal workers would be most severe. In March, industry experts said that the tourism sector would be feeling the consequences of the pandemic for at least two quarters, if not longer.

‘How could the state have this much money?’

Alongside a range of economic initiatives to help the struggling tourism sector, Hun Sen announced in March that unemployed tourism industry workers who lost their jobs could qualify for job skills training. However, the premier noted in April that informal economy workers — including drivers — would not have access to funds granted to suspended garment workers.

For those who have the ID poor card, the state will intervene. But as you asked me, motorbike-taxi drivers have asked if there is any solution. [They must] sell their motorbikes first for spending and buy rice to eat, because if they all come and ask for a solution, [we are going to] die. How could the state have this much money?

According to IDEA president Pao, based on research by his association, there are about 50,000 tuk-tuks operating thanks to mobile ride-hailing apps, and about 10,000 Cambodia-made tuk-tuks on the road.

Luy Lary, marketing manager of the Cambodia-based ride-hailing company PassApp, acknowledged the strain felt by the company’s drivers and said the management was considering how to help workers.

In 2019, drivers protested PassApp’s decision to reduce rates while raising the company’s commission from 13 percent for each ride to 15 percent.

For Da, the driver, the payment deadline for his $2,000 loan from HKL is becoming more worrisome. Rather than waiting for a tenuous support from ride-hailing companies or the government, Da said he’s considering selling his tuk-tuk and looking for work at a construction site, or going back to a garment factory.

If the situation is still like this, we do not know what to do. If we cannot make enough money, we can only sell our tuk-tuks to cover daily expenses and bank loans. If we do not make sales, we can’t repay loans.