After disappearing for 53 days, Bangladeshi journalist is found and sent to jail

"Kajol's disappearance is perhaps the price of his uncompromising journalism." 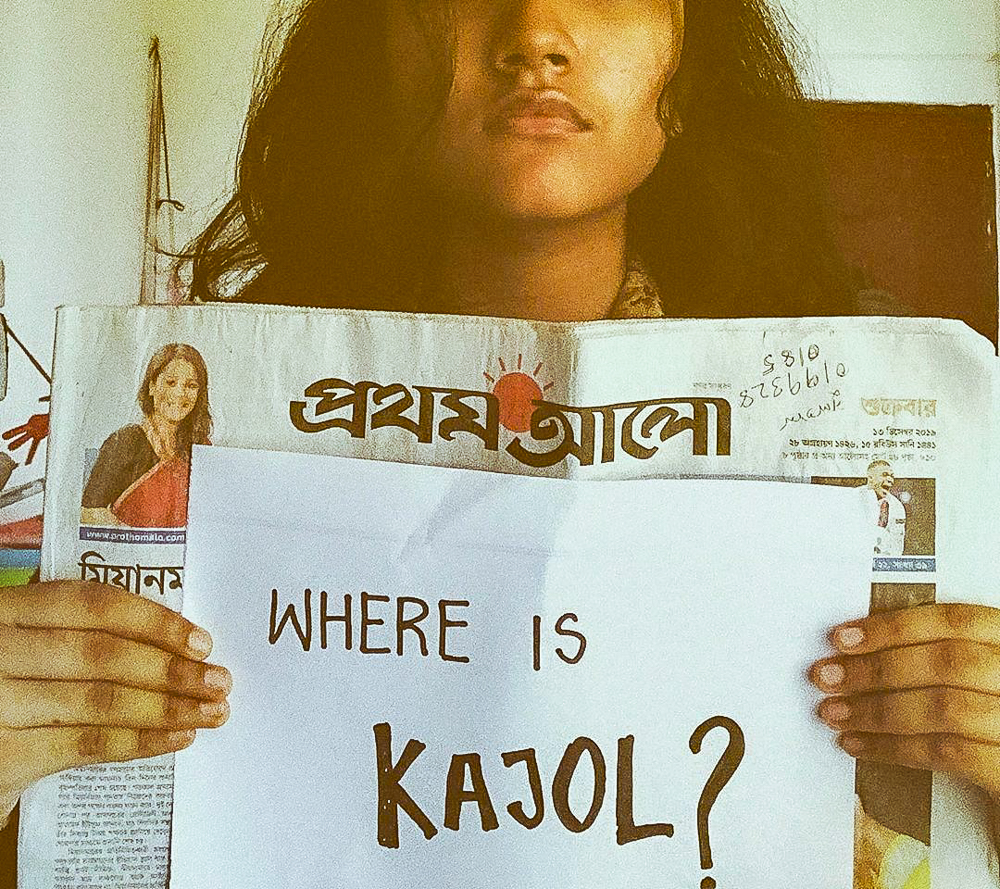 Bangladeshis on social media protested Kajol's disappearance holding a banner, “Where is Kajol”. Image via Instagram by theawkwardbibliophile. Used with permission.

On March 9, Bangladeshi photojournalist Shafiqul Islam Kajol, who is the editor of the fortnightly publication Pakkhakal, was charged with defamation. A day later, he went missing from his office in Hatirpool. When he was found alive 53 days later in Benapole, near the border of Bangladesh with India, police sent him to jail for ”trespassing.”

It’s not clear how he ended up there on the border, around 250 kilometres from where he went missing, but Amnesty International expressed concerns that this was potentially a case of enforced disappearance.

‘He is alive and fine’

The news of his return arrived coincidentally on World Press Freedom Day, celebrated on May 3.

After a night of high drama, it appears Kajol is alive! His son Polok spoke to him in the early hours of the morning. What better news to have on World Press Freedom Day! #whereiskajol #disappearance #journalist #photojournalist #photographer #editor #writer #father #bangladesh pic.twitter.com/WkcdQyN7Jg

On May 3, in the wee hours of the morning, Kajol's famlily received a phone call from a duty officer from Benapole Police Station. After confirming the filing of a complaint, the phone is handed over to Kajol.  “I recognized him through his voice, we were all listening,” his son, Monorom Polok, mentions in a Facebook live video as he sets off for the destination Benapole, Jashore.

He is alive and he is fine.

Kajo's family and supporters, however, did not get to rejoice at his return for long enough, before he was sent to jail.

The same day of his return, a new case was filed against him for “trespassing” into the borders of Bangladesh without a passport or visa, for which he was later granted bail. Subsequently, Kajol was arrested again under section 54 of the Code of Criminal Procedure , which allows the police to arrest anyone without a warrant. According to Jashore Kotwali Police Station OC Moniruzzaman, he was arrested under section 54 because he has three cases under the Digital Security Act. He was sent to Jashore Central jail where he will be under quarantine for 14 days “as a precaution against COVID-19 infection”.

Handcuffed photos of Kajol being escorted by the police circulating around social media caused rage among his supporters.

Since March 10 the question had been: Where is Kajol?
Now the question is: Why is he handcuffed? #WorldPressFreedomDay2020 pic.twitter.com/cwWDjrsE95

Currently, there are four lawsuits filed against him, three of which are identical under the controversial Digital Security Act 2018 for a report published by Daily Manabzamin, on March 2, regarding the arrest of Shamima Noor Papia a leader of the Jubo Mohila League in Narsingdi, an affiliate organization of the ruling party, on the charges of prostitution and extortion. The report mentions that Papia told investigators, during interrogation, that 30 influential bureaucrats and politicians including members of parliaments frequented her prostitution and extortion racket. The lawsuits also mentioned that the report was shared individually on social media by Kajol and other of its co-authors suggesting some names without evidence, which was considered part of the offences.

It is found out from family sources that now, due to the closing of courts for the COVID-19 pandemic, they are unable to file for Kajol’s bail.

On March 9, Saifuzzaman Shikor, Awami League MP of Magura, filed a case against Shafiqul Islam Kajol and 31 others, including Daily Manabzamin Editor Matiur Rahman Chowdhury, under the Digital Security Act. An officer of Dhaka's Sher-E-Bangla Nagar police station informed reporters that they have been charged with “spreading confusion by publishing false, fabricated and defamatory news.”

The next day, on the eve of March 10, Kajol went missing from his office, on Meher Tower at Hatirpool. A CCTV footage obtained by Amnesty International on their Twitter account shows a group of men tampering with his motorbike while he is still inside the building. Sometime later, when he drives away from the spot, it can be seen that the same group of men leave at the same time, following his direction.

On March 23, Sushmita S. Preetha wrote in an Oped on The Daily Star:

The (Manabzamin) report itself did not name any of these lawmakers and others, but it was later shared by some, including Shafiqul, on social media with a list of names.

Mysteriously, following his disappearance, his Facebook posts from this year have also disappeared. In fact, the last post that can still be accessed on his page dates back to November 27, 2019. According to a report by Prothom Alo, many of the missing posts involved the arrest of Jubo Mohila League leader Shamima Nur Papia.

When Kajol went missing, his family tried to file an abduction case, but two police stations refused to take the case, citing jurisdiction issues. They were finally able to lodge a complaint with the Chawkbazar police station on March 18, following a suo moto order from the High Court asking the police why it had not filed a case yet.

After fifty-three days his family came to know that he was found, however, a new case was filed against the photojournalist for breaching section 54 of Code of Criminal Procedure, for “illegally trespassing” into the borders of Bangladesh from India without a passport.

Symbol of the press freedom of Bangladesh. We found a journalist (Shafiqiul Islam Kajol) backed handcuffed after he was missed two months ago. #FreeKajol pic.twitter.com/iihwTtOn28

Caught between dignity and freedom is a journalist and father who has refused to trade off one for the other and has chosen the long haul to fight for both! Meanwhile, some of us have seen a son give his all to find his father back without giving in to any pain or pressure! ? pic.twitter.com/mDrWI2f2CY

Monorom Polok, upon the disappearance of his father, started the #whereiskajol movement on Facebook and Instagram and Twitter. In light of the current pandemic, different social media platforms were used as prime tools to address the concern. Resistance was built through art, words, live Facebook discussions, and also through live poetry recitations by Kajol’s 11-year-old daughter, Poushi. Approximately hundreds of people around the world participated in a digital human chain. They shared photos of themselves holding a paper to their chest that said “Where is Kajol”, urging others to do the same. 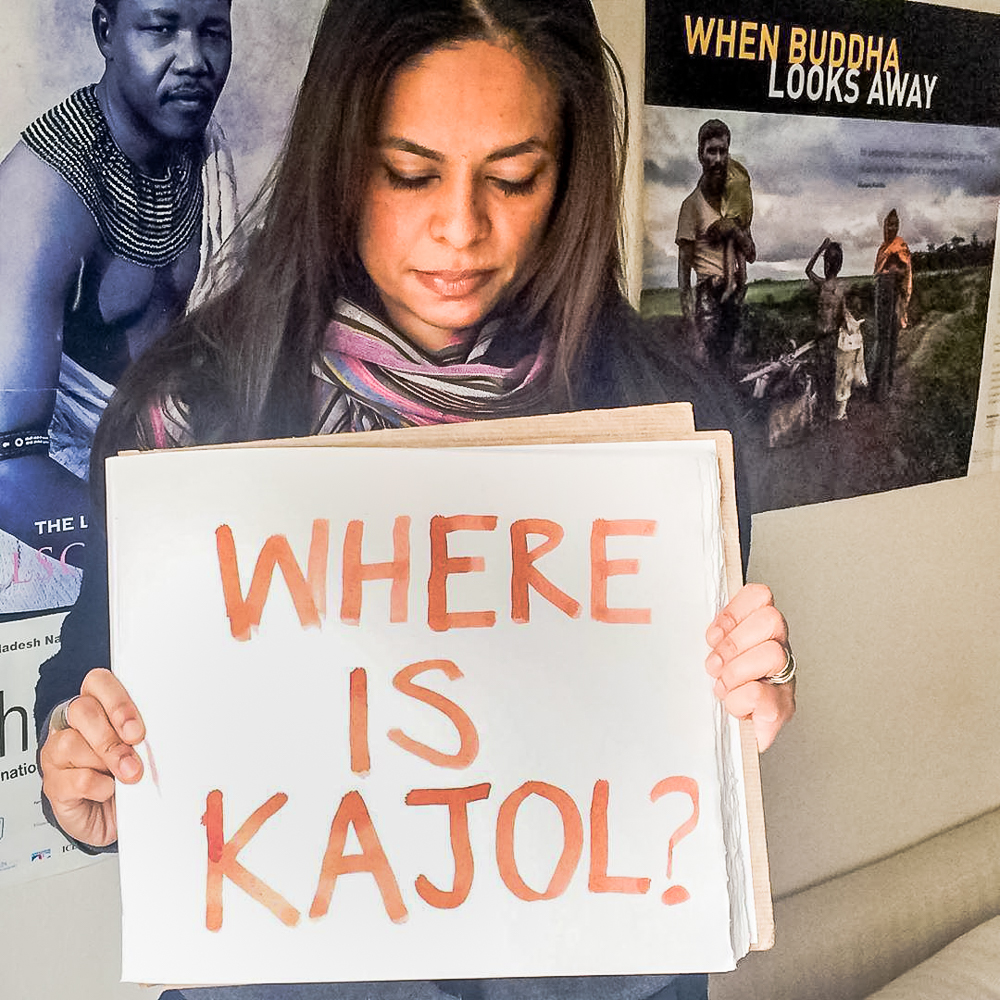 Bangladeshis on social media protested Kajol's disappearance holding a banner, “Where is Kajol”. Image via Instagram by Sofia Karim. Used with permission.

A virtual exhibition – titled Last Man Standing – was organized with the lifelong works of photojournalist Kajol. Literature from the exhibition read:

Kajol's work is the stark reminder of resilience and his disappearance is perhaps the price of his uncompromising lens towards social distortion. We demand the return of the last man standing.

The Digital Security Act on the basis of which three of Kajol’s cases were filed, has nationally and internationally drawn criticism and concern about press freedom from the time it was announced in 2018.

Time and again, a different journalist is prosecuted, or reported missing after encountering miscreants or people who claim to be from law enforcement agencies. Receiving frightening phone calls and murder threats keep the nation's media persons wary, making them vulnerable to attacks.

Mohona TV journalist FM Mushfiqur Rahman is one of the latest reported cases of disappearances. He  went missing in August last year. He said that some people sprayed a liquid substance on his face which made him unconscious while he was in a public transport. He was later beaten severely by his abductors and a few days later he was found by a local mosque imam in Sunamganj while crying for help.