The keyboard warriors got more than they bargained for 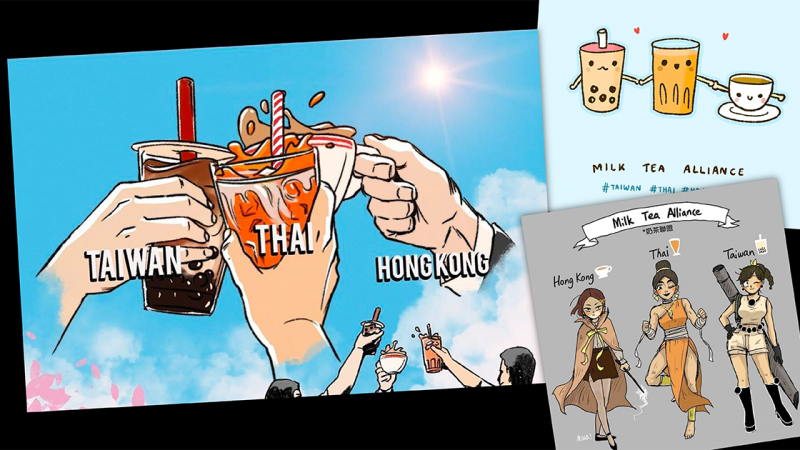 The strident efforts of Chinese patriots to police speech on Twitter — a platform that ordinary Chinese are barred from using — has spawned an unintended consequence.

Meet the “Milk Tea Alliance,” a pact formed between netizens from Hong Kong, Taiwan and Thailand in order to peg back Beijing's bullies on the platform.

The spark was a set of four photos showing city skylines that popular Thai actor Vachirawit Chiva-aree or Bright (@bbrightvc) retweeted. One of the skylines was Hong Kong's. The tweet noted fatefully that the photos were taken in “four countries.”

Chinese patriots swarmed the now-deleted tweet, which they interpreted as showing support for Hong Kong independence. Although Bright quickly apologized, calling his retweet “thoughtless”, the patriotic trolls decided to go further, and dug into his social media histories.

That brought them to Bright's female friend Weeraya Sukaram, or Nnevvy (@nvy_weeraya), on Twitter, who had shared a post speculating that COVID-19 originated in the Wuhan virology lab.

The patriots also unearthed an Instagram post from 2018, in which Nnevvy responded to Bright complimenting her for her “Chinese” look by stating that she preferred “Taiwan style.”

The Chinese online patriots interpreted Nnevvy’s comment as anti-China and pro-Taiwanese independence and began trolling Nnevvy with the hashtag #Nnevvy.

Since 2014, the Chinese government has been tightening control over an already suffocated information space.

Non-mainland Chinese pop stars and other celebrities enjoying success in the Chinese market are increasingly expected to promote a positive image of China, or at least be in sync with Beijing's official narratives.

This new emphasis has seen stars from both Taiwan and Hong Kong coerced into declaring their love for China in recent times.

Chinese online patriots have provided important assistance to the state censors in this effort.

Typically they find celebrity speech that deviates from official discourse, report it to authorities and call for public boycotts.

This kind of speech policing has now been extended to Twitter, despite the fact that the platform is not available to Chinese internet users without proxies.

For example, the general manager of Houston Rockets Daryl Morey set off an online firestorm last year when he tweeted in support of Hong Kong's anti-extradition protests.

The tweet quickly prompted a crisis between China and the US National Basketball Association (NBA) for whom the Chinese audience is a vital market.

Morey was forced to apologize.

There they called for a boycott of “2gether,” while also mobilizing Chinese netizens to teach Thailand users the One China principle on Instagram and Twitter.

Below is a tweet typical of the Chinese patriot response.

The resistance to this campaign began with tweets from individual Thai netizens posting under the #nnevvy hashtag. Themes ranged from COVID-19 to Chinese leader Xi Jinping's Winnie the Pooh complex.

I mean, One China, not two nor Three.

So we can have One Taiwan, One Hong Kong, One Tibet and so on. #nnevvy

Teach me how to eat bat

Many Thai netizens also pointed to the lack of internet freedoms in China:

Hi Xi Jinpooh
Your citizen use VPN to watch something that forbidden in china and follow thai actor,Not only that they threaten his gf’s privacy.
#nnevvy

Plz, Chineses if u can go out from china network .Go and see what's going in the “REAL WORLD” not what your gov want u to see and believe them. Also respect human rights to speak, not just spread shit into people who aren't think as u .#China #taiwannotchina #HKnotchina #nnevvy

As the Chinese patriots decried poverty in Thailand and mocked Thailand's government in response, many Thais applauded them ironically.

The Chinese patriots then resorted to typing codewords including NMSL, which means “your mother is dead,” in the comments to such posts.

Thai netizen @sleepless posted a keyboard picture to laugh at the Chinese state-sponsored commentators, who are known as Wumao (50 cents):

As the battles escalated, netizens from Hong Kong and Taiwan began to mobilise in support of Thais.

By mid-April this solidarity found expression as The Milk Tea Alliance.

The three-week-old alliance that began as a response to speech policing from mainland Chinese patriots now offers promising foundations to fight other battles in the region.

One recent and ongoing Milk Tea Alliance-led campaign is boosting an online petition against China’s Mekong Dam project, which has allegedly caused serious droughts in Vietnam, Laos, Cambodia and Thailand. The petition has over 52,000 signatures as of this publication.

China’s Mekong Dam causes drought by limiting the river's flow. We should stop it.