Mozambique has just one ventilator per every 1 million inhabitants

Cloth masks, reusable protective equipment, and traditional baths to relieve minor symptoms — these are some of the solutions found by Mozambican authorities and citizens as cases of COVID-19 continue to mount in the cash-strapped country.

There have been 80 cases of COVID-19 confirmed in Mozambique so far, according to the Ministry of Health, and no deaths. Seventy-two of those cases were the result of community transmission, while 57 are in the northern province of Cabo Delgado, the country’s epicentre of the disease. Nineteen patients have recovered to date.

However, given the health system’s limited testing capacity, those numbers are unlikely to reflect reality. As of the May 4 the country of 30-million had carried out only 2,589 tests by the Mozambique's National Institute for Health.

As with other developing countries, Mozambique's health system suffers from a shortage of essential equipment, such as ventilators — there are only 35 in the whole country.

The authorities are therefore trying to delay the peak of the disease, which some models estimate to hit by mid-year, until January or February 2021 so that the health service has enough time to gather resources and improve their understanding of the disease.

In the meantime, the government has declared a state of emergency and initially adopted some drastic measures, such as banning the popular motorcycle taxis. However, following violent protests against the measures by taxi drivers, the authorities relented and relaxed the policy, allowing the motorcycle taxis to operate on the condition that drivers and passengers wear masks. Masks were also made obligatory on all public transport.

But with actual surgical masks selling for between 50 and 100 meticais (almost 1 US dollar each), they're inaccessible to a majority of Mozambicans.

The government has then advised people to make homemade masks using capulanas – a traditional Mozambican cloth generally worn by women – and other readily available materials.

However, authorities have made no plans to help fund this homemade production and promised to distribute only 12,000 handmade masks – equivalent to one mask for every 2,500 people.

The Center for Democracy and Development, a local development organisation, criticized the government’s approach:

It's clear that yet again, the government is

imposing restrictive measures without thinking about the logistics necessary for its effective adoption by citizens.

According to the lusophone media organisation Agência Lusa, CIP’s masks are made from capulana and are lined with a starched cotton cloth that has the good capacity for filtering air particles. 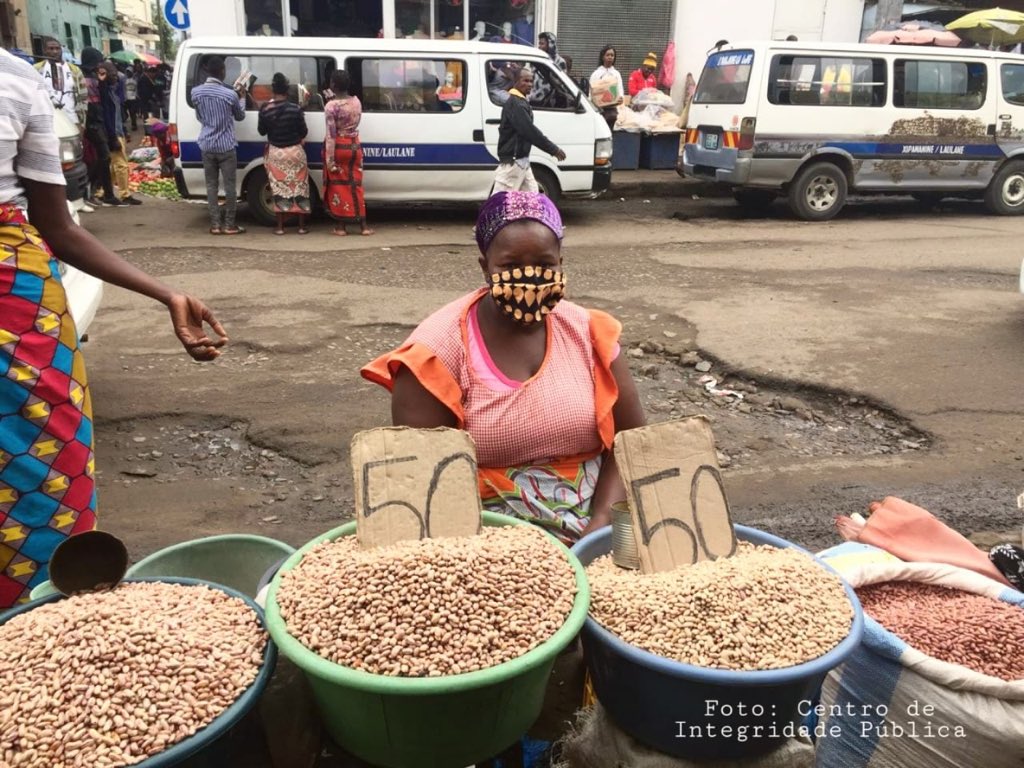 A picture of a mask made with capulana (local cloth) in Mozambique. Photo by the Centro de Integridade Pública, published with permission.

Health professionals are also affected by the shortage of protective equipment. To get around this, a group of doctors from the country’s best hospital, the Hospital Central de Maputo, have resorted to making gowns, caps, masks and protective covers for shoes and boots.

According to the hospital, the production of this equipment is only possible thanks to the involvement of staff with connections in the tailoring industry.

We hope that this personal protective equipment considerably reduces the contamination risks that medical staff are subjected to.

The equipment can be sterilised so it can be used more than once and is also cheap to produce.

In an interview with Mozambican television, Health Minister Armindo Tiago recommended steam baths to relieve minor symptoms of COVID-19 for the time being.

Steam baths are a common practice in Mozambique and involve inhaling the vapours from a blend of herbs or medicinal plants — usually eucalyptus and guava leaves — in boiling water. The leaves are mixed in a basin, and the person taking the bath covers themselves with a blanket for a few minutes and breathes deeply.

As shown by Verdade newspaper, the leaves used to make the aforementioned steam bath are already available for sale in various cities throughout the country, for the price of 50 meticais (less than 1 US dollar):

#covid19 entrepreneurship at the epicentre of the new #coronavirusMOZ each eucalyptus leaf is 50 meticais #Maputo #Moçambique pic.twitter.com/bfliNZhKV8