'Coronavirus could kill, but hunger kills many more people' 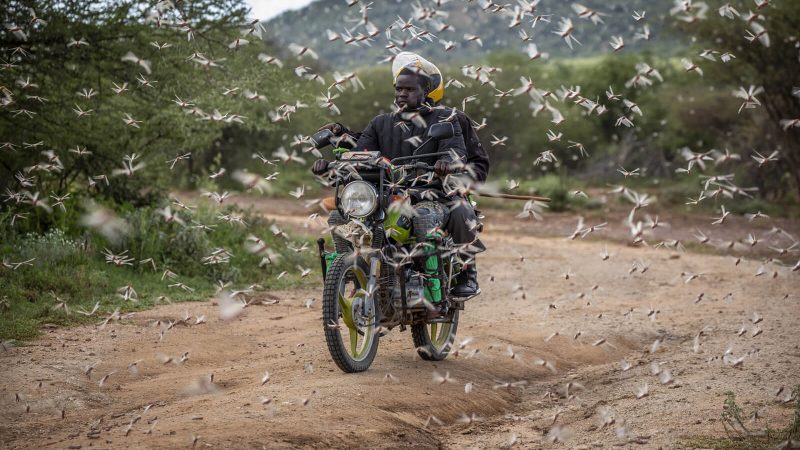 A desert locust swarm in Kipsing, near Oldonyiro, Isiolo county, Kenya. The current situation in East Africa remains extremely alarming as hopper bands and an increasing number of new swarms are forming in Kenya, southern Ethiopia and Somalia. ©FAO/Sven Torfinn, used with permission.

COVID-19, desert locusts or torrential rains and floods — where should East Africa focus its attention among this “triple threat”?

As the rains coincide with planting season across the region amid various coronavirus restrictions, this question — albeit, somewhat rhetorical — is on a lot of people's minds.

#covid19africa, torrential rains & killer #floods/Climate change; and #locusts in East Africa. If we had to fight only one, which should it be? Which one will kill us less? #EastAfricanDilemma

Out of 779 respondents, 45 percent said that if they had to pick one crisis to fight, it would be the coronavirus. Cases have soared across the continent over the month of April, upending lives due to various preventive measures — like lockdowns and travel bans — that have essentially halted economies and markets.

But the locust plague across the Horn and East Africa posed a threat to food security long before the coronavirus shifted the world's focus — 33 percent of respondents said that locusts were potentially more deadly than the virus or floods. And 22 percent said that torrential rains and flooding, largely attributed to rapid climate change across the continent, is a threat to East African lives. Severe flooding has wiped out crops, driven food price hikes and sent residents “scrambling for survival,” from Somalia to South Sudan to Democratic Republic of Congo.

The truth is that this crisis trifecta — the virus, locusts, and floods — is not mutually exclusive. In fact, each is inextricably linked.

The locusts — primarily affecting central Kenya, southern Ethiopia, and Somalia, at this time — are the result of “unusually wet weather over the past 18 months that created perfect breeding conditions,” according to Bloomberg.

The largest locust outbreak in 70 years occurred in January 2020 among several East African nations, destroying over 25 million hectares of crops. Now, experts say that the second wave of hatched locusts from the offspring of the first could be 20 times larger — and more menacing — than the first wave. 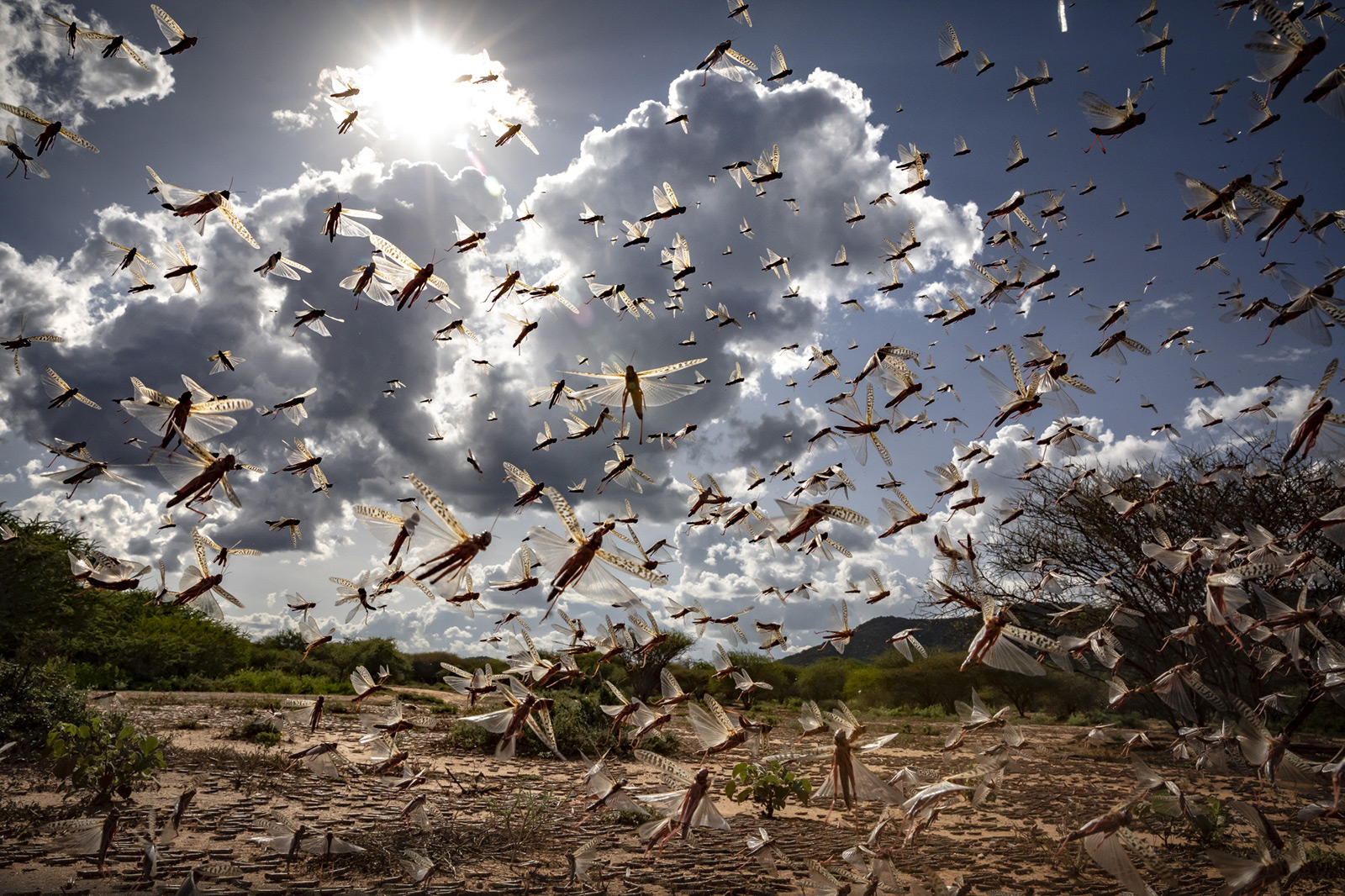 “Coronavirus could kill, but hunger kills many more people,” said Akinwumi A. Adesina, the president of the African Development Bank. Adesina wrote that desert locusts can “consume crops in one day that can feed approximately 35,000 people,” and in East Africa, where approximately 20 million people are already food insecure, the effects could be devastating.

Taming the locusts has required copious amount of pesticide — and political will. But with the second wave of “LOCUST-19″ looming, East African nations have turned their attention to confronting COVID-19, implementing travel restrictions that directly impede the ability to mitigate the locust swarms that can travel up to 150 kilometers in 24 hours, munching through food meant for humans. Analysts say this means that many farmers will likely not see a harvest in June.

Donors pledged or provided $153 million via the Food and Agriculture Organisation (FAO) to help governments purchase pesticides, helicopters and other essential materials needed to fight the second locust outbreak, but “supplies purchased by the agency did not start to arrive until mid-March when a second generation of the ravenous insects was beginning to hatch,” according to The New Humanitarian. 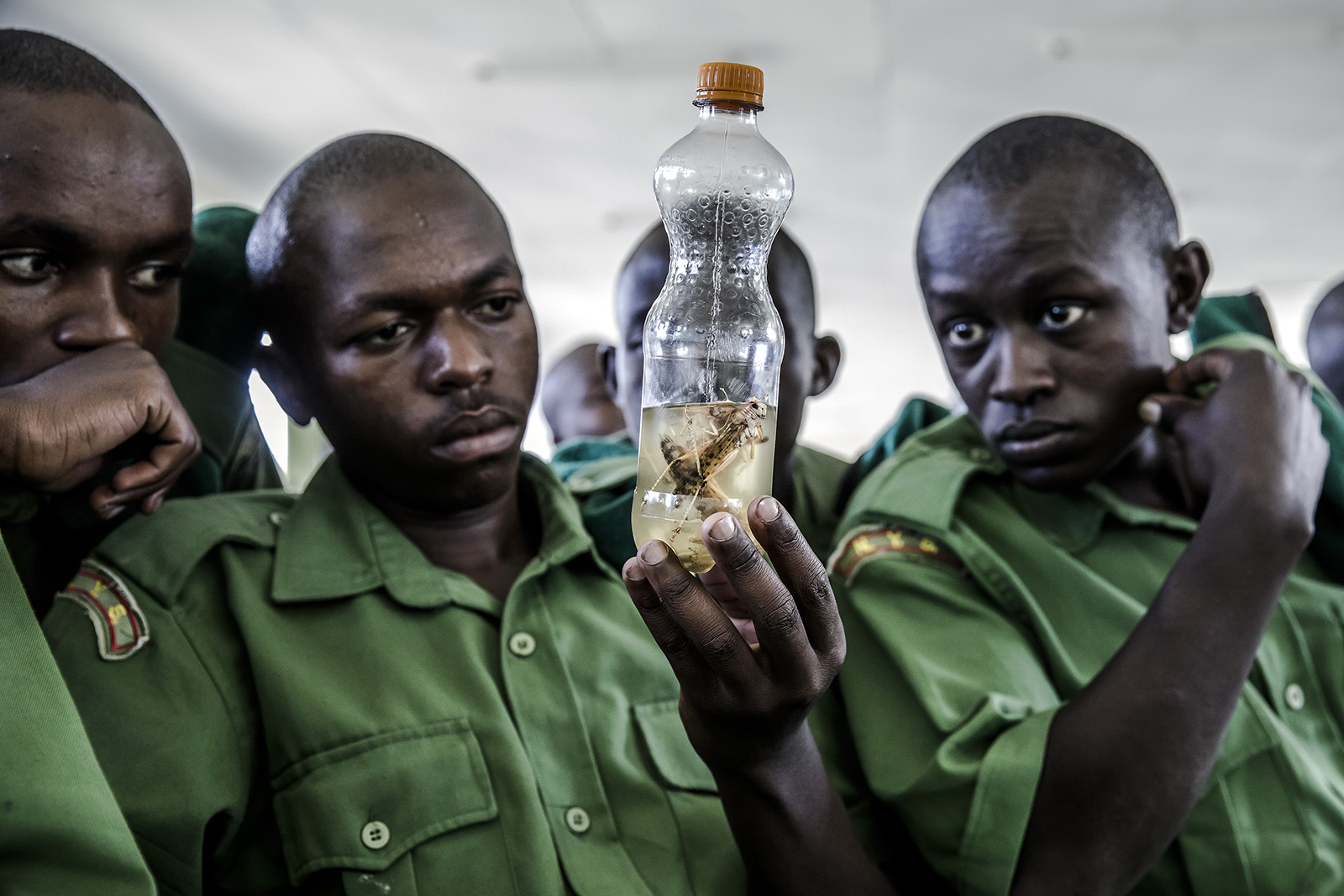 The maddening buzz of locusts is the song of climate change.

“This particular outbreak began with heavy rains from two cyclones in May and October of 2018 that hit the southern Arabian Peninsula. This allowed two generations of desert locusts to form into swarms. Each generation can be 20 times bigger than the previous one,” wrote Matt Simon with Wired.

And just like the coronavirus, “the terrifying reality is that if you don't stop a locust swarm early, there's very little you can do to stop its spread,” Simon said.

Netizens like Namaiyana on Twitter rightfully point out that the poorest people will feel the brunt of these crises:

Floods, locusts, covid19, foods and locusts again – these are the climate catastrophes that East Africa is currently facing, and yes it’s the people who live on less than a dollar a day that feel the full brunt of these crisis. #FridaysForFuture
Pic: Alfy Alfredoh pic.twitter.com/Sk0phYKiQm

Most people in South Kivu had already been displaced by violence. Now homeless, it's nearly impossible for many to “shelter-in-place,” as DR Congo also attempts to contain the spread of the coronavirus.

On the island of Unguja, part of the semi-autonomous archipelago of Zanzibar, heavy rains brought the most extreme flooding some villages have seen since 1978, as reported by politician Simai M. Said:

Comforting my constituents in the village of Ubago after severe floods. The last recorded such heavy rain around the area was 1978. #Tunguu #Mpakabas

Sadly, these disasters have largely fallen under the radar due to the world's laser focus on the coronavirus pandemic:

While the world is focused on #COVID19, my hometown #Uvira, Eastern DRC, is almost wiped out by floods. Dozens of children and women have died. Humanitarian aid is desperately needed. #JeSuisUvira #IamUvira. pic.twitter.com/MtbREhTrO5

This “crucible season” of the coronavirus plague exposes all kinds of contradictions, according to Kenyan writer Yvonne Adhiambo Owuor, who wrote an eloquent letter titled “The Pestilence, the Populists and Us” in The Elephant, an online portal.

The “favored self-delusions and mythologies we hold about ourselves and the place of the ‘other’, has frayed and in some cases, fallen apart in a very public way,” she wrote. “I expect a massive re-orientation, reshaping, reconfiguring of the world.”

Adesina, president of the African Development Bank, recommends several life-saving policies to enact now across Africa to stem the collective blow of the coronavirus, locusts and floods: One, establish a tax-free “green channel” in Africa to expedite the free flow of food and pesticides; two, put measures in place to prevent food price hikes and anti-hoarding policies and release food from government-held grain reserves; and three, invest in food production technology that is both safe and innovative.

Focusing just on the coronavirus in East Africa — and not also on the desert locusts or massive flooding due to climate change — is not an option. The future depends on it.