Venezuela is unprepared to receive the returnees 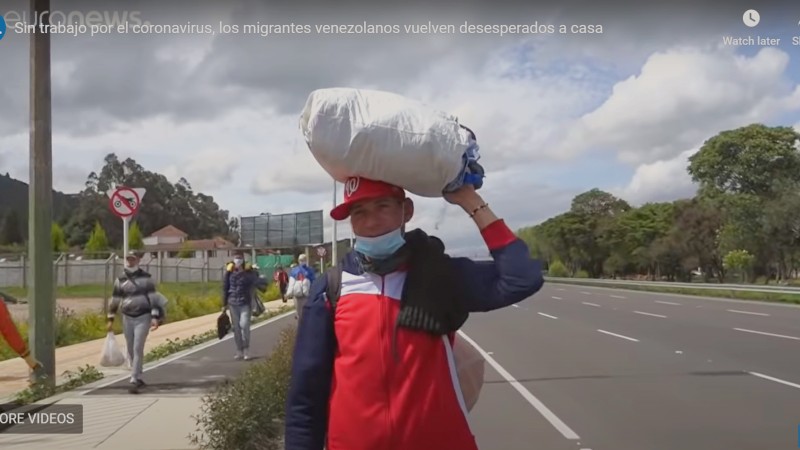 Screenshot of a video from Euronews, published 13 April 2020.

Crossing borders on informal foot trails or in buses and trucks, tens of thousands of exiled Venezuelans are attempting to return to Venezuela. Migrants say this mass return from neighbouring countries such as Peru, Ecuador, and Colombia is due to lack of work, difficulties paying daily rents and the struggle to make a living during the crisis caused by COVID-19 in these countries.

According to Colombian newspaper El Tiempo, 500 migrants are arriving at the border city of Cúcuta every day intending to return to Venezuela. As of 15 April, a total of 34,000 people had passed through the city since mid-March.

This mass homecoming is extraordinary given that nearly 5 million Venezuelans have emigrated in the last four years because of economic collapse, hyperinflation, public health insecurity, and shortages of services in Venezuela.

Up until a month ago, official data showed that more than 1,8m Venezuelan migrants were living in Colombia, whilst the governments of Peru and Ecuador estimated the number of Venezuelans residing in their countries to be 800,000 and 400,000 respectively. According to the UN Refugee Agency (UNHCR), hundreds of thousands of Venezuelans in these countries do not have the correct documentation, making them vulnerable to labour exploitation, sexual exploitation, and xenophobia.

The precarious situation of Venezuelans living abroad has worsened with the lockdown and isolation measures taken by the governments of Colombia, Ecuador, and Peru in order to combat the coronavirus pandemic. Business closures and obligatory confinement have had a severe impact on Venezuelan migrants, most of whom make a day-to-day living in the informal economy.

‘We want to go home’

Despite the border closure ordered by the Colombian government, hundreds of Venezuelans in Ecuador thronged at the border bridge between Ecuador and Colombia demanding to be allowed into Colombia and to continue the 1,800-kilometre journey northwards towards the border with Venezuela.

Meanwhile, in the areas bordering Venezuela, the Colombian government has set up humanitarian corridors with health control measures in place to make it easier for the migrants to return to their country.

Mayor of Cali (Colombia), @JorgelvanOspina, reported that a humanitarian corridor had been set up to transfer hundreds of migrants coming from Ecuador to Venezuela.

Although some regional authorities have provided buses and trucks to transfer Venezuelans to the Colombian border cities of Cúcuta and Arauca, the majority of the migrants who are trying to return face transport difficulties. So they set out on their exodus on foot or try to hitch a ride on the highway.

Hundreds of migrant families are currently held up in the middle of their journey. In Bucaramanga, a city 200 kilometres from the border, they can be seen installed with their few possessions in the Parque del Agua (water park) awaiting transport to Venezuela. The local government has hired buses to move the migrants and to avoid, in the words of the governor of the Santander department, the risk of the virus spreading in the region.

There are situations where migrants know that they cannot return but do not have the resources to stay. This is the case of Eduardo José Rondón and his wife, who arrived in Colombia four months ago on foot from Puerto Orzar, in the east of Venezuela. They settled in Bucaramanga, a city close to the border, where he earned a daily living looking after vehicles in a car park.

Eduardo Rondón told Global Voices that he cannot return to Venezuela because his wife is pregnant and due to give birth in a few days’ time.

“They have promised to attend her in the hospital [of Bucaramanga]”, Rondón told Global Voices, adding that his wife wants to stay in Colombia to have her baby in a place she considers safe.

However, they face a dilemma: “we are going to be evicted from our room because we haven't paid rent for several days. But there's no money for food either! I don't know what we're going to do.”

Venezuela, unprepared for the arrivals

The government of Venezuela launched the “Return to the Homeland Plan” in August 2018. This is described as a diplomatic and economic strategy to facilitate the repatriation of Venezuelan citizens in economic need who wish to return to their country. Under this plan, hundreds of families have returned by plane and bus from various countries including Brazil and the Dominican Republic.

However, migrants who succeed in crossing the Colombia-Venezuela border via unofficial crossings or by bus are faced with a dire reception, as can be seen on social media in the Venezuelan city of San Antonio. The writer and political consultant Gustavo Azócar describes it as “chaos”:

Venezuelan authorities, according to official media, are carrying out health checks and transferring returnees to temporary hostels so they can spend two weeks in isolation. But there have been complaints of logistical failures and inadequate food supplies for the repatriated migrants, who in some cases feel that confinement conditions amount to mistreatment.

In Colombia, following harsh criticism of a lack of leadership and national co-ordination to support Venezuelan migrants during the pandemic, president Iván Duque stated that his government will continue to support the migrant population residing in Colombia, especially the most vulnerable. He asked for patience whilst humanitarian aid is distributed. He also condemned the discrimination and xenophobia against Venezuelan immigrants: “They need the best of  our Colombian solidarity.” 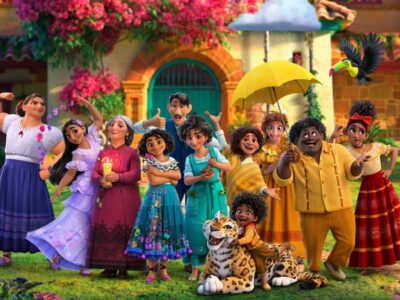