COVID-19 in Palestine: Living between hope and fear

If the political situation deteriorates, it could impede coronavirus response 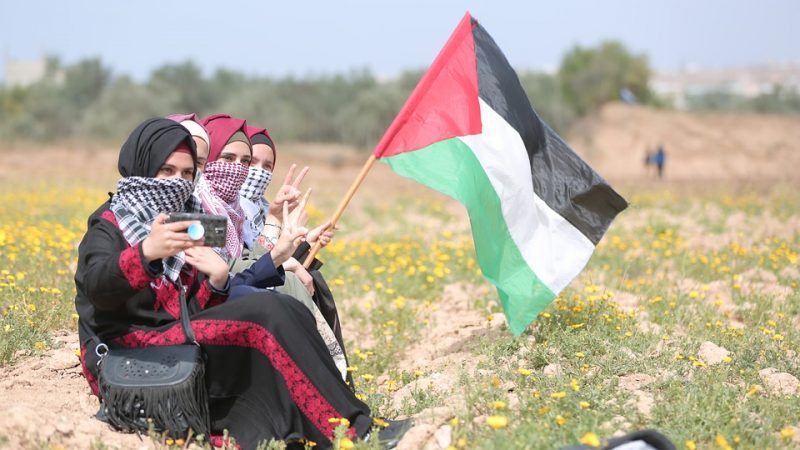 Palestinians in the Gaza Strip wave the Palestinian flag. Photo by Hosny Salah via Pixabay, no attribution required.

The Gaza Strip, an overpopulated and impoverished Palestinian territory governed by Hamas leaders, faces particularly vulnerability in the COVID-19 pandemic. The West Bank, where the Palestinian National Authority holds power under the banner of Mahmoud Abbas, faces a similar situation.

What makes the situation in both places particularly worrying is a highly concentrated population with very limited economic opportunities.

On March 22, the Gaza Strip reported two cases involving people returning from Pakistan, raising fears of a potential humanitarian crisis. By April 30, the cases have risen to 12, increasing the fear that the virus could spread, although no deaths have so far been reported.

Local authorities took rapid and direct measures to slow the spread of the virus. With mounting cases reported in neighboring Israel, massive gatherings were banned. The Health Ministry exhorted Gaza inhabitants to wear masks, albeit without enforcement.

Authorities in Gaza also imposed a partial travel ban and since late March, all persons returning to Gaza are required to stay under quarantine for 21 days. To implement this policy, makeshift quarantine centers have been set to accommodate returnees:

Palestinian authorities closed all mosques and imposed social distancing measures. On April 23, one Palestinian was condemned to six months in jail for violating quarantine measures.

In the West Bank, according to Palestinian authorities, workers returning from Israel are the main source of infections, forming at least a third of all reported cases. About 150,000 Palestinian workers have returned to Palestinian territories and self-quarantined themselves.

Coinciding with the beginning of the holy month of Ramadan on April 24, 8,000 workers returned from Israel through border checkpoints, sparking concerns about possible unreported cases. Local authorities took restrictive measures to limit movements while imposing a two-week quarantine for those who cross the border with Israel.

Numerous workers found themselves out of work overnight due to imposed measures and business closures. This had a direct impact on the poverty rate in the territories. According to local authorities, 53,000 Palestinians have fallen below the poverty line since Mohammed Abbas, the Palestinian prime minister, announced a state of emergency on March 29.

Densely populated, impoverished areas are also a point of concern. In the Gaza Strip, 2 million inhabitants are spread over 300 kilometers In the city of Jabaliyah, for example, 115,000 people are crammed into a 1 x 2-kilometer area. Nearly 80 percent of the population relies on foreign aid and the unemployment rate is an estimated 40 percent.

One Gaza resident noted the difficulty of the situation: “We usually receive funds, donations and food, but this year everything will be different because of the COVID.”

Local health workers also worry about a lack of equipment to deal with a potential outbreak. One health worker in Gaza recently pointed out:

We don’t have enough hospitals, or ICU [intensive care unit] beds, or mechanical ventilators. I understand those facts.

The lack of medical equipment is particularly striking in Gaza, with fewer than 100 ventilators reported, limited hospitals and a lack of ICU beds. According to local authorities, Gaza has around 120 ICU beds, but most are already occupied by non-COVID-19 patients.

In a press conference, local authorities appealed to the international community for personal protective equipment and other medical supplies. Electricity is usually only available half of the day — limiting activity in hospitals.

The United Nations Relief and Works Agency for Palestinian Refugees in the Near East (UNRWA) has taken several steps to fill these gaps. On April 1, the organization began home deliveries of food aid to 240,000 families.

On April 14, Palestinian authorities launched a relief plan dedicated to poor households funded, in part, by the European Union. As a result, 134 shekels ($38.30 United States dollars) will be distributed per person. Adnan Abu Hasna, a UNRWA spokesman in Gaza, said they made an appeal for an emergency budget of $14 million USD to fight the coronavirus in the 58 Palestinian refugee camps. But so far, only 30 percent of that amount has been secured.

One Palestinian company based in Gaza started producing masks and medical equipment last month. By April 7, the company has produced 150,000 masks and 5,000 gowns. Local distribution rapidly extended to the West bank and now, the company is directly selling masks to the state of Israel, which became its main customers.

A glimmer of hope

Amid the crisis, cooperation between Israel and Palestinian authorities has been noted. Nikolay Mladenov, United Nations Special Coordinator for the Middle East Peace Process, recently pointed out that the COVID-19 situation is an “inspiring example of cooperation across conflict lines.”

As an occupying power, Israel has been prompted by international nongovernmental organizations and local organizations to relax the blockade imposed on hygiene kits and to enable the free flow of essential cargo.

With about 15,147 cases and 198 deaths reported, Israel is seriously affected by the virus and braces for a potential second wave coming directly from the West Bank or Gaza Strip.

On April 15, the Israeli finance minister, Moshe Kahlon, promised a financial loan granted to the Palestinian territories, to “help them facing the crisis.” Authorities are discussing ongoing measures with the United Nations to ensure revenues granted by Israeli authorities will not dip below $137 million USD during the next four months.

On April 12, the Israeli army implemented testing procedures at the military laboratory Tzirfin for Gaza residents. However, due to a lack of coordination, the initiative was rejected by the Israeli government.

Examples of cooperation can not hide looming tensions between the two governments.

On April 21, the newly formed Israeli government officially stated its willingness to start the annexation of the West Bank. In response, Palestinian authorities threatened to cancel all bilateral agreements between the two countries.

Hamas authorities who oversee the Gaza Strip also stated that if Gaza did not get the medical equipment it needed, it would “stop the breathing” of 6 million Israelis, threatening to launch an attack on Israel.

A deterioration of the political situation could adversely impact the COVID-19 crisis and directly impact local civilians in both territories. Residents of both Israel and Palestine now hang in the balance between hope and fear.