Will the Lesser Antillean iguana be saved from extinction?

The species is threatened by green iguanas and humans 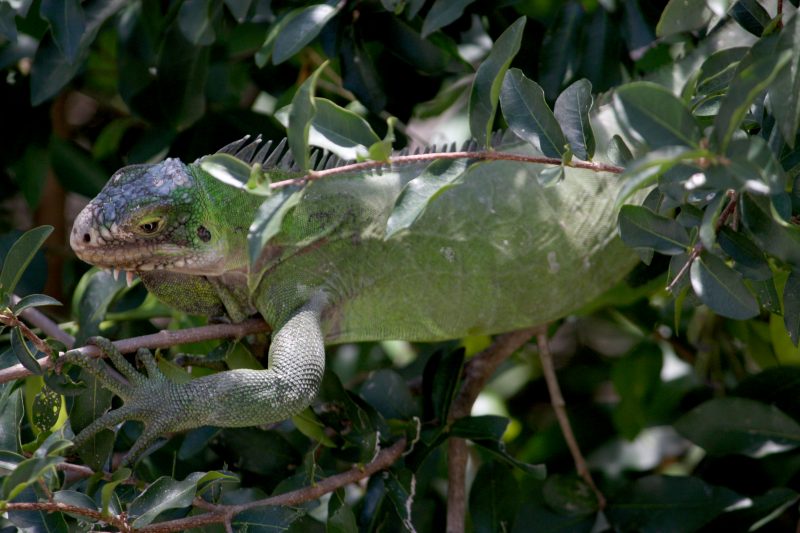 Often portrayed in action and adventure movies as either a giant, human-eating lizard or a harmless pet, the iguana is a reptile native to South and Central America.

Classified as a critically endangered (CR) species in the Union for Conservation of Nature (IUCN) red list since 2009, the Iguana delicatissima is threatened with extinction, despite initiatives being taken by regional governments and organisations — but is it already too late?

History of the species

The first iguanas appeared in the Antilles more than 7,000 years ago, when the region was still uninhabited. These reptiles were so common in the archipelago — especially in Saint Lucia — that the indigenous Kalinago named the island Iouanalao, meaning “There where the Iguana is found”.

During the colonial era, these reptiles were chased and eaten by both the Kalinago and the French, who considered them a good source of protein.

Buffering Dominica are the islands of Guadeloupe and Martinique, two French overseas departments that are also home to a significant population of Lesser Antillean iguanas.

In contrast, the Lesser Antillean iguana is believed to be extinct on the islands of Bonaire, Saba and Saint Martin. It has also completely disappeared on the archipelagos of Antigua and Barbuda and Saint Kitts and Nevis.

The decline of this species, whose life expectancy can at least reach 15 years, could be linked to two interconnected phenomena: competition and hybridisation. The first occurs when individuals (of the same or different species) are competing over a resource in order to survive and reproduce. The second happens when two similar species give birth to a hybrid offspring.

The incidence of the latter is increased by the resulting environmental impacts of intensive farming and urban inrush. Confronted with the deterioration of the vegetation and reduction of their natural habitats, the iguanas are compelled to live together in smaller spaces.

Moreover, quite apart from having to cope with natural predators, among which are dogs and cats, the Lesser Antillean iguanas are vulnerable to road accidents and hunting.

Since the 1970s, governments around the world began to take measures to protect biodiversity. On March 3, 1973, 80 countries adopted the Convention on International Trade in Endangered Species of Wild Fauna and Flora (CITES). This binding agreement, signed in Washington, DC, regulates the trade of 30,000 species of plants and 5,800 species of animals, including iguanas.

A decade later, on March 23, 1983, 25 Caribbean states signed the Cartagena Convention for the Protection and Development of the Marine Environment of the Wider Caribbean Region, which grants protection to the Iguana delicatissima. This Specially Protected Areas and Wildlife (SPAW) protocol was signed on January 18, 1990, in Kingston, Jamaica. Both SPAW and CITES were ratified by Dominica, France, the United Kingdom and the Netherlands.

Some countries went further and added the conservation of the species into their own legislation. In 1989, for instance, a French ministerial order made it illegal to hunt, import or trade the Lesser Antillean iguana in Guadeloupe and Martinique. In Guadeloupe, the order initially protected the common green iguana as well, until it was withdrawn from the list of the protected species by an order published on February 10, 2014.

On October 21 and 22, 2009, Dominica hosted a workshop on the conservation of the Lesser Antillean iguana. It served as a basis for the IUCN’s Conservation Action Plan, a document created to ensure the long-term survival of the species in the region.

Similarly, the French Ministry of Ecology launched two national action plans, covering the periods 2011-2015 and 2018-2022. The current plan aims to protect the Lesser Antillean iguana by countering the proliferation of the green iguana.

In Dominica and the French Caribbean, citizens are committed to conserving the Lesser Antillean iguana by halting the spread of the common green iguana.

The nonprofit organisation WildDominique, for instance, surveys and captures green iguanas, while educating Dominicans about the importance of conserving the Lesser Antillean iguana. Likewise, the volunteers of the Guadeloupe-based environmental organisation TITÈ (Organisation for the Management of the Natural Areas of La Désirade) carry out catching operations, especially on the island of La Désirade and on the Petite-Terre islets. The success of these exercises is partly dependent on citizen engagement, as people are encouraged to call in whenever they sight a green iguana.

Still, much remains to be done. In Martinique, for example, the Lesser Antillean iguana is still classified as a critically endangered species — the antepenultimate threat level before complete extinction — according to the IUCN's latest red list of threatened species in France, published on April 22, 2020.

Only time will tell if the Lesser Antillean iguana will survive or disappear. Yet, the announcement of the discovery of a new species of black endemic iguana (Iguana melanoderma) on the islands of Montserrat and Saba on April 14, 2020, shows the unpredictability of nature.

Nevertheless, many feel that these hopeful signs must not relax conservation efforts.

Nigeria  1 day ago
Cancel this reply