A feeling of hopelessness: Interview with a Uyghur refugee in Turkey 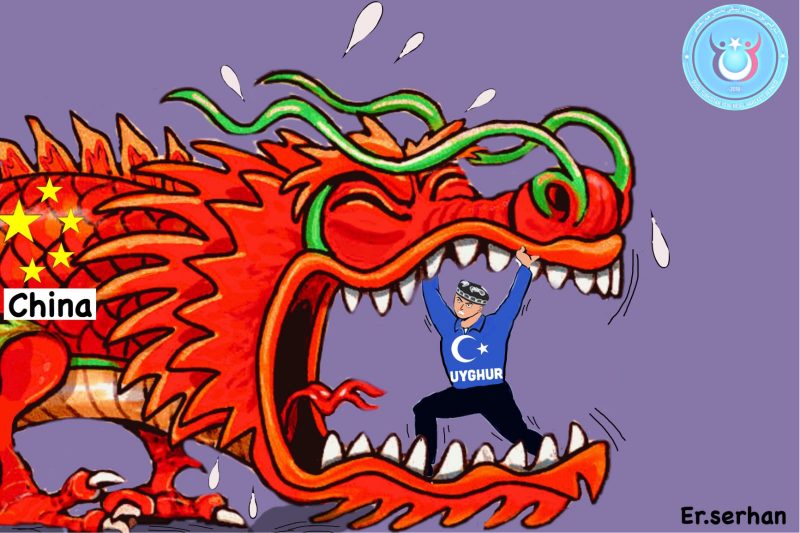 Image by Ershat Abdul'ehet representing the Chinese government as a red dragon and a man wearing a traditional Central Asian hat and a blue shirt symbolizing the movement for independent East Turkistan. Used with permission.

The author's identity has been kept anonymous for safety reasons.

Starting in 2017, the Uyghur community living in China has been submitted to increased targeting and indiscriminate imprisonment by the Chinese authorities. This policy of racial and religious profiling has led young Uyghurs, who are able, to leave China and remain in exile mostly in other Muslim countries such as Egypt, Turkey and Malaysia.

The 11 million Uyghurs living in the western province of Xinjiang in China are a Muslim Turkic nation that has been targeted by Beijing more systematically as Chinese leader Xi Jinping took power in 2012. Widely portrayed as ‘motherland separatists’ or simply ‘terrorists’ in mainstream Chinese discourse – including government statements and media – the Uyghurs have been deprived of their most basic human rights, including freedom of religion, of movement, and also of transmitting their native language.

The persecution of Uyghurs has translated into different forms: imprisonment, often with heavy sentences of over 10 years, and more recently, internment in camps in which, according to various testimonies and sources, over 1 million Uyghurs – as well as other Muslim minorities — are being kept. Given the secrecy of the internment camps, that China insists on presenting as ‘vocational training centers, exact numbers are difficult to attain but hundreds and possibly thousands are believed to have died while there. More detailed information is available in the Xinjiang Victims Database.

Global Voices interviewed Ershat Abdul’ehed, a 22-year-old native of Hotan, a city located by the Taklamakan desert in Xinjiang. Ershat is now stranded in Turkey as a refugee, while his father and older brother are in China, having been sentenced to 18 and 10 years respectively. Ershat is unable to return to China as he studied in Egypt, a country Beijing has put on a list of 26 countries deemed “sensitive”, which means any Uyghur lucky enough to have been able to travel, do business or study abroad will interrogated upon return to China and often harassed, sometimes imprisoned or sent to camps.

The interview was conducted over the phone in Uyghur and edited for brevity.

Global Voices (GV): Why did you decide to travel to Egypt?

Ershat Abdul'ehed (EA): I just wanted to learn more about my religion, Islam. My plan was to study and then go back home. When I went to Egypt for studies in 2015, there was absolutely nothing illegal about doing such a thing. My father Abdul’ehed Jume, accompanied me to Egypt to get settled, and then returned home to Hotan, in Xinjiang, where he was running a successful business selling car parts. My older brother, Abubekir Abdul’ehed, was also working in the family business. In February 2016, Abubekir came to Egypt to visit me for two weeks.

GV: What happened to them?

EA: Both got arrested in early 2017, but we never got any information about the reason for that arrest, so I just have my own theory. The only reason I can think of, is that my father is punished for sending me to study in Egypt. And for my brother – that he went to Egypt to visit me. Plus, the Chinese authorities have targeted many wealthy and successful Uyghurs in recent years, and my father is one of them. All my family knows is that both are held in a prison in Ürümqi [the capital of Xinjiang region]. We have no news about their health status or about their charges, and I am particularly worried about my brother because just a month before his arrest, he went through kidney surgery.

GV: How do you keep in touch with your family in Xinjiang?

EA: I am completely cut off now. My relatives deleted us from their Wechat accounts [the main social media app in China], and in the current situation I am also worried that they will get some kind of retaliation from the authorities if I try to contact them. In June 2017, I moved with my mother and sister, who had been visiting me, from Egypt to Turkey, This is the only family I am in touch with now.

GV: How do you cope with your new life in Turkey?

EA:  Here I am studying sociology, but I find it very hard to perform. Many Uyghur students in Turkey face a similar situation: we are deeply affected by the fact we are being separated from our parents, and are not able to contact them. We are living in a nightmare. We are constantly worried and feel hopelessness. It’s really difficult to focus on our studies in a situation like this. To me, the future looks very dark, and it’s not possible for me to lead a normal life. 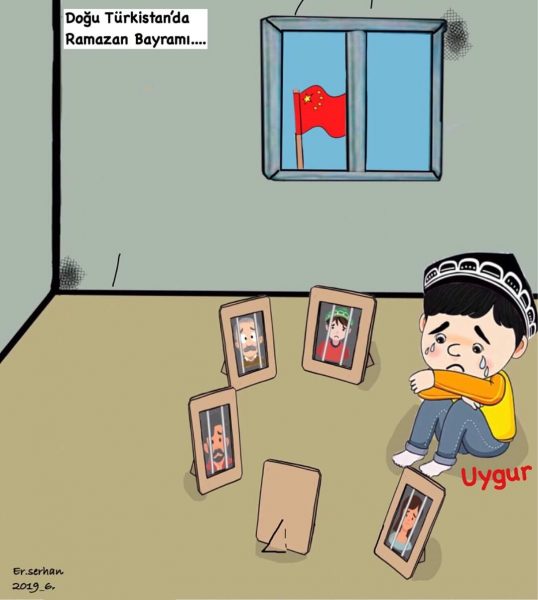 Image by Ershat Abdul'ehet representing the celebration of Ramadan in China. Used with permission.

GV: How did you decide to become an activist for the Uyghur cause?

EA: Following the initial shock and despair after learning about the arrests of my father and my brother, I didn’t know what to do. I just hoped that what really had happened wasn’t true. After two years passed without any news from them, I wanted to make a video testimony for them. But my mother stopped me. She was afraid that I would make the situation worse for them. But by 2020, we still had no news, so she agreed to let me do it. I have since posted some videos. Besides I started drawing caricatures as another way to draw attention.

Here is one of Ershat's pleas for the release of his relatives on YouTube:

The Global Voices community takes the security of our members very seriously. We omitted the name of this post's author in an effort to protect the security and safety of this person.

Freedom of Speech  7 days ago
END_OF_DOCUMENT_TOKEN_TO_BE_REPLACED