Women set up an arena to claim representation there 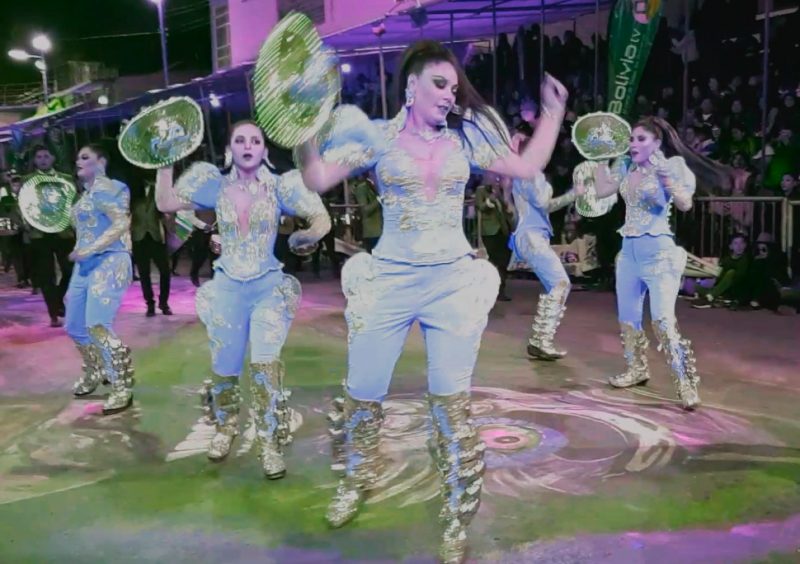 Women make traditional Andean dances their own with female-led machas caporales at the Carnival of Oruro 2020. Photo by Fabiola Gutierrez.

Before the COVID-19 pandemic forced the world’s countries to shut down, colors exploded in bright arrays and music boomed at Bolivia’s Carnival of Oruro which took place this year on February 17-26.

Musicians danced, and dancers sang, all while sporting sparkly hand-embroidered costumes that glittered under the parade lights and fires.

At 3,735 meters (12,253 feet) above sea level, 35,000 dancers and 5,000 musicians celebrated ancestral folklore on their 4-kilometer (2.48 mile) pilgrimage route in devotion to the Virgen del Socavón. The Carnival of Oruro, which takes place every year in southwestern Bolivia, has been declared a Masterpiece of the Oral and Intangible Heritage of Humanity by UNESCO. 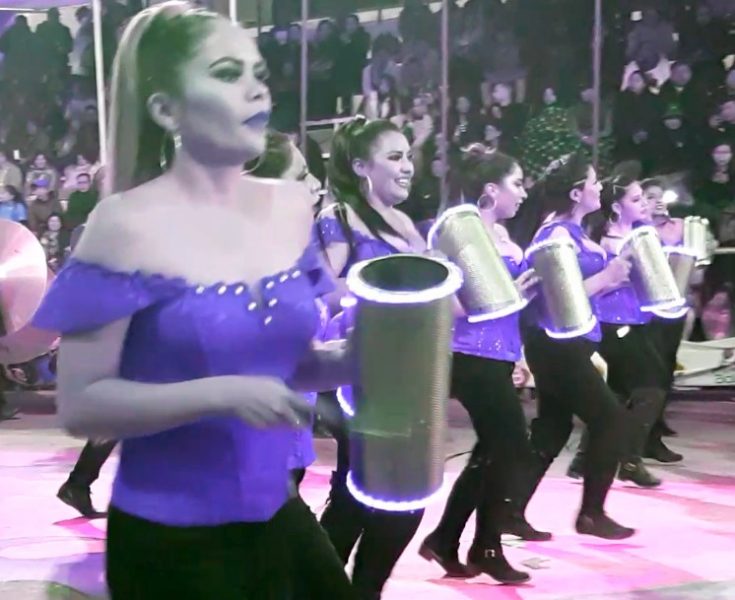 Female band members at the 2020 Carnival of Oruro. Photo by Fabiola Gutierrez.

Although the carnival is an arena for celebration, it also highlights the inequalities between men and women. Yet women and non-binary people, long excluded from the carnival, have now claimed a space where they can exercise their right to participate.

In the area of music, the traditional bands festival was led by a woman for the first time this year — 18 years after the band was first created. The director, pianist and soprano Vanina Miranda, along with three other directors, selected, prepared, and directed scores for 23 songs. 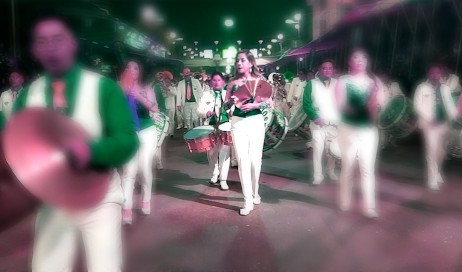 Cymbal players perform at the Folkloric Entrance in honor of the Virgen del Socavón in Oruro. Photo by Fabiola Gutierrez.

Less than a decade ago, when women were first allowed to join bands in the Oruro Carnival, a photo was published in the news with the sexist caption: “Beautiful women lend another ‘touch’ to the bands.” A shift occurred with the arrival, in 2017 and 2018, respectively, of the Candelaria Female Instrumental Band and the Santa Cecilia Band, created by and comprised entirely of women. 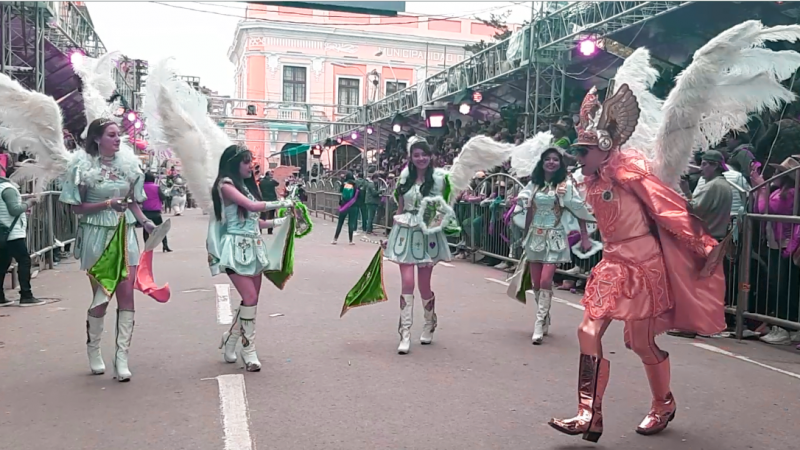 Women interpret the virtues in the cultural demonstration of the Dance de Diablos using movement, music, and clothing. Photo by Fabiola Gutierrez.

In the area of dance, women also move against the macho beat of gender role assignment. One example is La Diablada (Dance of the Devils) which depicts the struggle between good and evil. Previously, women were only allowed to portray devilish characters, but now play the roles of female angels representing the Seven Virtues and accompanying the Archangel Saint Michael. 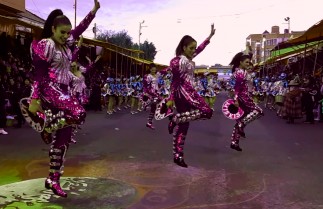 The Machas, a female-centered version of the Caporales, a traditional Andean dance, are another recent innovation. As Spanish is a grammatically gendered language, it is worth noting the use of the name “Machas” (a feminized take on “Machos”) instead of “Las Caporales,” which indicates a woman must be referred to as masculine in order for her strength to be acknowledged. Another curious absence is that men do not seek to portray the cholitas, a female character in the Caporales dance.

Until the 1970s, the only female character in the Carnival of Oruro was the Virgen del Socavón. Patriarchal conservatism barred biological women from participating, so this female character was portrayed by trans, homosexual, and heterosexual men, as explained by researcher and cultural manager David Aruquipa.

The female characters of the Morenada dance are the China Morena (depicted with or without a mask, and sometimes as an old chola with different skirt lengths and boots), and the Figure, who is often sexualized. Photos by Fabiola Gutierrez.

In the Morenada dance, men used to cross-dress to represent the traditional “China Morena” character. In the 1960s and 70s, the China Morena acquired a more sexualized, transvestite aesthetic: the skirt was shortened, high heels were added to newly platformed boots, and fantasy images were embroidered on the clothing, turning China Morena, as Aruquipa explained,  into “China Morena Mariposa” (mariposa, or “butterfly,” is Spanish slang for gay men).

But in the mid-1970s trans women were banned from participating after a dancer named Barbarella kissed the then-de facto President Hugo Bánzer. After the incident, biological women were admitted.

Figures of the Morenada at the Carnival of Oruro. They come from the China Morena Mariposa character as created by transvestites in the 70s. Photo by Fabiola Gutierrez.

At carnivals, machismo changes costume too

Although carnivals are perceived as outlets for sexual liberation, women must still contend with attempts by others to control their bodies. Now granted permission to dance and make music, they are also not the targets of sexual harassment. This usually takes the form of derogatory prompts like “Move it, move it!,” whistling, and demands for kisses. Women who do not comply are accused of being “bitter.” Male dancers are subjected to this treatment as well, but to a lesser extent and without penalty. Older adults are subjected to shouts of “mother-in-law,” as sexist expectations of women reduce them to bodies that serve either erotic or maternal demands.

Furthermore, sexual harassment reinforces a sexual division of leisure. Where can Bolivian women let off steam outside of caregiving, family, or home, without being threatened with sexual harassment, rape, or femicide? Do such spaces even exist for women? 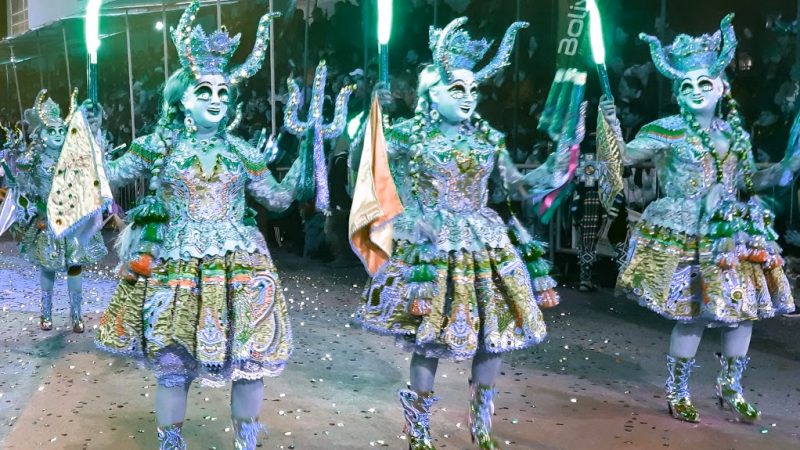 Chinas Supay (“devil women”) at the 2020 Carnival of Oruro. Photo by Fabiola Gutierrez.

One possible solution comes from another Bolivian carnival rite, the Comadres festival in the city of Tarija in southern Bolivia. This tradition celebrates friendship between women by exchanging baskets filled with food, flowers, and streamers. The festival takes place on the Thursday before the Carnival of Oruro, and women ensure that there is no male interference. This tradition has spread to other Bolivian cities in the form of a bar and party theme, as well as being co-opted by the anarcho-feminist movement Mujeres Creando (“Women Creating”), which started the Comadres Bandidas Party this year.

Together we will continue to devise ways of disobeying patriarchal mandates. With lesser or greater feminist awareness, we will ally ourselves as comadres and transvestite reality. As feminist Emma Goldman said, as though describing the Carnaval of Oruro: “If I can't dance, I don't want to be in your revolution!”