The practice is still deeply entrenched in some regions 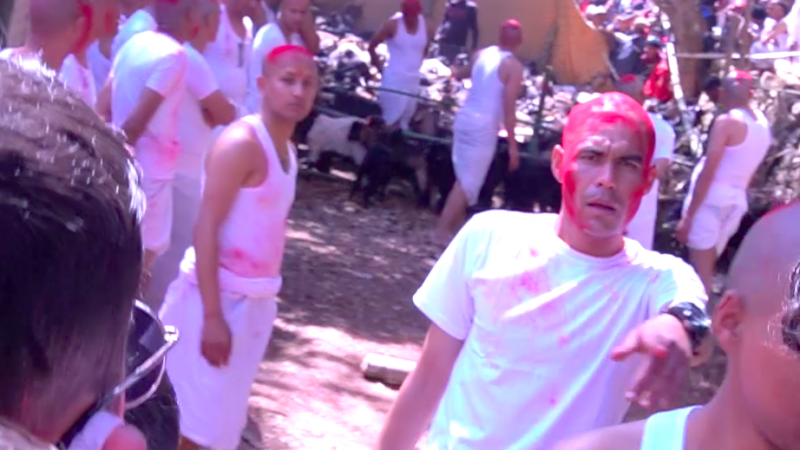 Screenshot from Inside a clan's tradition of deity worship and sacrifice,  a video documentary by Saprina Panday. Used with permission.

Note: The author of this story directed and produced the mini-documentary, “Inside a clan's tradition of deity worship and sacrifice”. She is also a member of the Upamanya Gotra (Pandey) clan.

In different regions of Nepal, animal sacrifice is still a thriving part of some religious festivals. While global attention is on the famous Gadhimai festival, many small-scale religious ceremonies also include what activists see as cruel sacrificial practices. Despite continued protests from rights groups and legislation aimed at banning the practice, animal sacrifice is still a deeply entrenched part of the cultural norms of many communities.

A ‘ban’ on animal sacrifice

The Gadhimai festival, often called the largest mass animal-slaughter on earth, caught the world's attention after international animal rights activists, like Brigitte Bardot, began campaigning against the event in 2009. It is held every 5 years at the Gadhimai Temple of Bariyarpur near the Indian border.

After mounting pressure from both national and international animal rights groups, India's Supreme Court outlawed the transportation of animals across the border to Gadhimai without a license in 2014. Nepal's Supreme Court followed suit by directing the government to come up with a strategic action plan for the phasing out of the practice of animal sacrifice. In 2015, even the Temple Trust of Gadhimai had agreed to ban animal sacrifice.

However, despite the ‘ban’, the Gadhimai festival took place in 2019.

#Nepal temple ban animal sacrifices #Gadhimai festival?
We object to th cruelty with which animals r treated
There is random hacking of animals in open space. Not all animals have their heads chopped off.
The festival management committee cannot stop the animal sacrifices. pic.twitter.com/eNbKhPlrBw

The fact that the largest, and the most infamous animal sacrificial ceremony did not lead to an all-out ban suggests that it will be even harder to put an end to the practice at small-scale regularly held events like the Kul Devata Pujas.

Kuladevata refers to a diety that is worshiped by specific clans who follow the Hindu faith. During Kul Devata Pujas, different clans meet up – albeit at different intervals –  to rekindle their sense of community and worship their deity. Animal sacrifice often forms an integral part of that worship and the building of kinship.

“Inside a clan's tradition of deity worship and sacrifice” is an original mini-documentary made in March 2020 which focuses on animal sacrifice in the Upamanyu Gotra (Pandey) clan, a clan that meets once every 12 years in the eastern part of Nepal.

Attended by thousands of people, this year's event led to the killing of over a thousand goats in the belief that doing so would be honoring the wish of the deity and lead to the fulfillment of future wishes. Many members of the community also saw it as a way of uniting ties of kinship.

An interview with festival attendee Surya Bahadur Pandey shows that, despite growing ethical awareness about animal sacrifice, many are still attached to the tradition of bringing goats to slaughter, because of how it provides continuity with the past:

We know this is not right. But this is our upbringing and ancestral tradition. We cannot change this right away, but it will get amended gradually. Everybody wishes for that but you cannot suddenly change your upbringing. And for that reason, this sacrifice is ongoing.

While events in this video are distinct to this particular clan, the beliefs that surround the practice of animal sacrifice are similar to other rituals around the country wherever animal sacrifice is practiced whether that be at another clan's Kul Devata Puja or at the Gadhimai Festival.

But more than ever, many have expressed anger at the cruelty with which animals are treated in sacrificial festivals across the country. Nepali animal activist group, Bloodless Gadhimai, carried out numerous campaigns to try and change public opinion.

There are so many animals, and many are not even beheaded cleanly because the knives are blunted by the mass slaughter. Sometimes they have to hack the animal many times, and the animals take hours to die,” says media personality Saroj Nyaupane.

This same outrage has also led to calls for an end to animal sacrifice during the Dashain festival which is celebrated with prayers and offerings to Durga.

#Dasain animal sacrifices need to end in #Nepal.
In #Kullu #India it is happening switched 2 coconuts
In #Mysore white pumpkins are smashed

#Dasain is synonymous with goat curry & I am sure few Nepalis will relate to goats as emotional & intelligent beingshttps://t.co/dOVUYHhVnG pic.twitter.com/YTflLyyMh3

It is promising that this new mindset is changing social norms, and many locals have opted to ‘sacrifice’ coconuts and squash instead of animals.

But clearly animal sacrifice is part of something bigger than simply a practice. It is part of a deeply embedded cultural and traditional norm and holds meaning for many of those who practice it. Trying to ignore that aspect of it, will only serve to perpetuate the status quo and so it is imperative that it be taken in to account when implementing ways to end animal suffering.