Setbacks for freedom of expression as Tunisia fights COVID-19

’Officials and state institutions are not immune from criticism’ 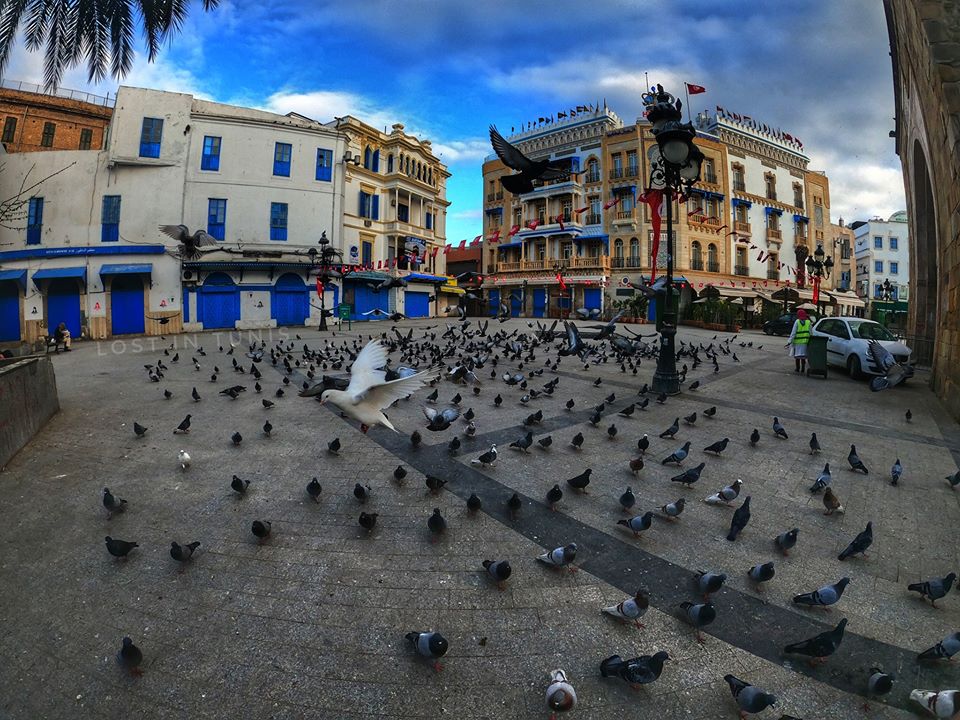 Pigeons occupy the usually-crowded Bab Bhar square in the capital Tunis, as the country is in general quarantine since 22 March. Photo credit: Lost in Tunis blog [Used with permission].

As Tunisia fights COVID-19, those who criticize the government's response to the pandemic are facing attempts to silence them.

Two bloggers were arrested earlier this month for accusing local authorities of corruption in relation to the distribution of aid, while a journalist who criticized the health minister faced insults online.

Blogger and local activist Anis Mabrouki was arrested on April 14, 2020, a day after he live-streamed on Facebook a crowd of citizens in Tebourba (30 kilometers west of the capital Tunis), gathered outside the mayor’s closed office to demand financial aid promised to them by the government.

‘’Aid is given to certain people and distributed in questionable ways,’’ Mabrouki commented while live-streaming the video.

After the mayor filed charges against him, he appeared in court on April 15 and was charged with “causing noises and disturbances to the public” and “accusing public officials of crimes related to their jobs without furnishing proof of guilt” under Articles 316 and 128 respectively of the Penal Code, his lawyer told Amnesty International. He remains in prison as he awaits his next hearing, scheduled on April 30.

In Tajerouine, a town in the province of El-Kef governorate (175 kilometers west of Tunis), female activist Hajer Aouadi was jailed for accusing local authorities of corruption in the distribution of semolina in a video posted on Facebook April 12. In the video, she also said that when she went with her uncle to the police complain, they were assaulted and threatened with arrest. Local police arrested them both that same day. They appeared in court the following day and were charged with “insulting a civil servant” under Article 125 of the penal code and “causing noises and disturbances to the public” under Article 316 of the penal code. They each face up to a year in prison and a fine.

‘’Tunisian authorities have long resorted to vague criminal laws to punish and prosecute online commentary but continuing to do so in the time of COVID-19 pandemic is upsetting,’’ Nissaf Slama, a member of Human Rights Watch Tunis office research team, told Global Voices. “Officials should abstain from arresting and prosecuting bloggers and citizens over their peaceful commentary on issues of public interest,” she added.

Article 86 of the Telecommunication Code stipulates that anyone convicted of “harming others or disrupting their lives through public communication networks” may face up to two years in prison. The Penal Code has provisions that criminalize defamation and the spreading of content “liable to cause harm to public order or good morals.”

Journalist and media commentator Khalifa Chouchene was recently subjected to an online campaign of insults after criticizing Minister of Health Abdellatif Mekki.

In a radio show titled “Albilad Alyawm,” on National Radio on April 9, Chouchene criticized government members’ lack of respect for COVID-19 health and safety measures, such as wearing masks and keeping the 1-meter distance in their visits to hospitals and quarantine centers. “They should cry less because coronavirus recognizes neither the tears of ministers nor human feelings, it only recognizes real and practical measures on the ground,” he said. In a press conference held on April 7, the minister of health, Mekki, cried as he urged people to respect the general health quarantine in place in the country since March 22.

After Chouchene ended his commentary, later in the same show hostsd by another journalist, Mekki requested the right to respond. He criticized Chouchene for ‘’taunting’’ him and for “evaluating things he’s not qualified to evaluate.” “You’re not an expert to criticize us,’’ Mekki said, referring to the commentator.

Some of the minister's supporters on social media resorted to attacking the journalist and the media sector in general on Facebook. One wrote that “this media of shame should only be destroyed.’’ Another wrote that he supports the “burning of [media] headquarters and the execution of all those who work in any media outlet that spreads fear or strife, or even questions the efforts of health professionals.”

In a statement published on April 10, the National Syndicate for Tunisian Journalists (SNJT), denounced the online campaign while raising concerns over ”the minister’s rejection of media criticism under the pretext that the country is at war against the coronavirus.’’

The syndicate reminds the minister of the role journalists play in awareness-raising and in reforming the national plan to counter the virus by criticizing the shortcomings that permeated the measures that were adopted.

‘Not immune from criticism’

In an article published on Global Voices on April 24, Tunisian contributor Saoussen Ben Cheikh wrote that the war rhetoric deployed in the fight against the COVID-19 pandemic by politicians and some media in the Middle East and North Africa, ”has sparked hysteria, fear and polarization among citizens.”

This war narrative has created a climate of a ‘rally around the flag’ effect where people unite behind supposedly strong and decisive leaders.

In this climate, criticism of the government is not tolerated because the country is allegedly “at war.” As a result, journalists and bloggers who question the authorities’ response and measures to the novel coronavirus can face attempts to silence them under the pretext that they lack ”patriotism” or ”expertise,” or, as in the case of Mabrouk and Aouadi, charged with ”causing noises and disturbances to the public.”

‘’Officials and state institutions are not immune from criticism, and especially not so, during a crisis,’’ Slama of Human Rights Watch said.