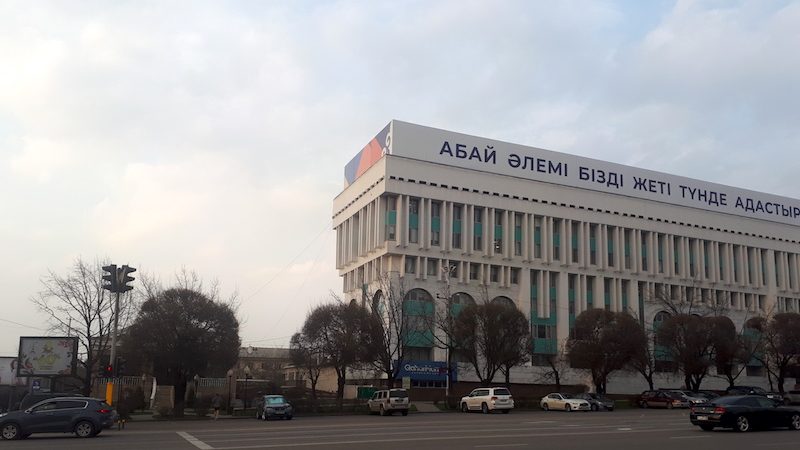 Then 30 of them perish in broad daylight and the Ecology Ministry opens an investigation. And you begin to feel it.

Pecking at your skin.

Kazakhstan's two largest cities – Almaty and Nur-Sultan – have been locked down for over a month.

In recent weeks, most other major settlements have joined them, as clusters of the novel coronavirus grow in almost every corner of the world's ninth-largest country.

The vastness of the steppe limits connectivity between far-flung hubs, but have proved to be no vaccine.

My family's quarantine is a privileged one. Our flat is quite spacious. Square metres inside become more important when access to square kilometres outside – parks, playgrounds*, pedestrianised areas – have been shut down. We have the resources to wait this out.

Others in Kazakhstan do not. Kazakhstan's authoritarian government has committed to monthly handouts of roughly the equivalent of US$100 for the around four million citizens left without work as a result of the lockdown. It is more than neighbouring Central Asian countries can afford, but still short of enough.

This tweet from a journalist in Kazakhstan's neighbour Kyrgyzstan sums up the gulf between the comparatively well-off, social media-using sections of the population, and the offline masses. Although Kyrgyzstan is the poorer of the two countries, the comparison holds:

On the left, a Twitter user complains of running out of whisky and gaining weight during quarantine. On the right is the rest of Kyrgyzstan.

For governments in this authoritarian region, the race to flatten the curve feels existential.

If the choice between the spread of hunger and the unsustainable spread of COVID-19 becomes binary, even regimes that weathered the economic maelstrom of the 1990s will have cause for fear.

While governments in Europe have tossed and turned over how to enforce quarantine regimes and social distancing, the response here feels more reflexive.

And where the state does miss something, there is a network of informants to help out.

A WhatsApp group named the Action Committee, set up by the administrators of our residential complex to update residents on quarantine measures, soon evolved into a powerful lobby demanding their enforcement: How dare families use their sanctioned walks to the dustbins to stroll around the complex not once, but several times? People are walking around without masks against government recommendations! Have you seen the kids that are still playing basketball?!

Ever since, the police and the military have shown up to patrol the complex most mornings. And so, the basketball players whose games gave the yard outside a semblance of normality, have disappeared from sight.

The COVID-19 crisis is an opportunity for shows of strength on the part of the state, but it also lays bare its weaknesses.

Authorities in Kazakhstan's capital Nur-Sultan boasted that their network of Chinese-manufactured smart road cameras would be training their gaze on drivers to ensure they were not breaking quarantine.

And yet the government has been unable to prevent high infection rates among medics on the front lines — medics, in fact, make up nearly 30 per cent of the country's roughly 2,300 cases of COVID-19.

Personal protective equipment is, in many cases, scarce. So when Almaty's chief epidemiologist blamed medics for infecting themselves, doctors and nurses rebelled, threatening to sue her. They received plenty of public support. On April 18, she resigned from her post.

President Kassym-Jomart Tokayev, whose government faces the additional curveball of the near-total collapse in oil prices, has since acknowledged that many hospital staff have been poorly looked after.

Men in masks and overalls arrive twice a week at residential blocs, announcing their arrival with loudspeakers and disinfecting everything in sight. Many of the spaces they are disinfecting — playgrounds, parks, pedestrian spaces — have seen little or no use at all since the quarantine has been in force. But the exercise is not useless. Residents are warned it is unsafe for them to go outside for up to five hours after the spaces are disinfected: #StayAtHome.

Pigeons don't get the same courtesies. Around the beginning of quarantine, social media rippled with shocking images of the creatures lying dead in a popular park. The Ministry of Ecology surmised tentatively that they were poisoned, and pledged to follow up. It still hasn't, but the sense of mystery has faded. Those 30 pigeons were disinfected to death.

*On the day this post was published, playgrounds attached to residential complexes were re-opened for the first time in more than a month. The measure was part of an April 27 presidential order extending quarantine until May 11 but easing some restrictions in cities where it is in force. The order also allowed internal flights between Kazakhstan's two largest cities, Almaty and Nur-Sultan.