A selection of Latin American and Caribbean ‘coronavirus songs’

The songs range from solemnity to humor. 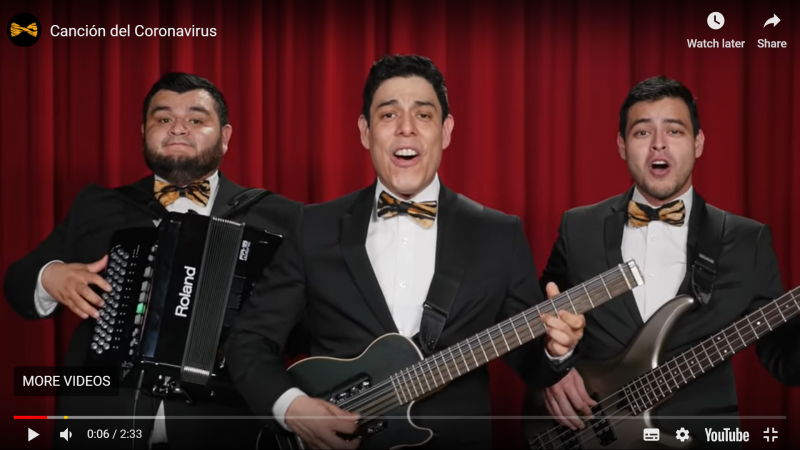 In Latin America, artists did not stop creating music despite the pandemic and the subsequent mandatory confinement measures in place in nearly every country in the region. Music referring to COVID-19, in particular, gained a lot of traction on the internet since March.

Here are nine songs that Latin American artists have produced — from their homes, for the most part — in the past couple of months. Many of them have a humoristic tone. For example, Mexican artists usually enjoy using dark, or “politically incorrect”  humor, in their art, as a way to cope with negative news. Also, some of these songs were published before the virus hit the continent hard. Other songs, however, are more solemn in nature or have social protest messages in their lyrics.

The band Los Tres Tristes Tigres, a comedy band from Monterrey, Mexico, released several songs in the times of COVID-19. Their first one, “Canción del Coronavirus” (“The Coronavirus Song”) reached 3.7 million views on YouTube, and was taken up by Puerto Rican artist Bad Bunny on his Instagram page.

The trio, whose band name is inspired by a famous Spanish language tong twister, is made up of Jesús Gallardo (accordion, iPad and maracas), Erick Ibarra (bass and double bass) and Pedro Palacios (guitar and vocals). They do stand up comedy and humorous songs, generally on based on regional Mexican music genres, such as the popular corrido.

La “Canción del Coronavirus” talks about the early stages of panic regarding the pandemic — when school classes and concerts got canceled and people rushed to stores to stock up on groceries. “They closed Disneyland, and this is scaring me,” they sing, while not censoring Mexican Spanish swear words.

One of Nicaragua's most important singers, Luis Enrique Mejía Godoy, published a song on YouTube solemnly encouraging people to stay at home to slow the spread of COVID-19.

Mejía, sometimes called the “troubadour of the revolution,” actively participated in the first revolutionary socialist and Sandinista government in Nicaragua, which lasted from 1979 until 1990. His songs are known in Central American for their social and political awareness.

In “Quedate en Casa” (“Stay at Home”), he sings, on the tone of a Spanish guitar, “Stay at home, don't insist so much [in going out], tomorrow we will be finally able to hug each other.”

Nicaragua, Central America's poorest country, has been criticized for not taking stringent measures to slow the transmission of the virus — schools and borders have remained open, for example, and President Daniel Ortega has been largely absent from the public sphere.

Yofrangel 911 was probably one of the first Latin American artists to release a song about COVID-19, on February 9. With 8,5 million views on YouTube, “Corona Virus” by Dembow singer Yofrangel tells people to “cover your mouth” while citing the most common symptoms of the disease on a catchy beat. According to Insider, many people reacted to the song on Twitter — activist Angy praised the song and asked the World Health Organization to prepare campaigns based on it, while some YouTube commentators believed that this video “is disrespectful to the people and businesses losing so much because of this virus.”

Cuban singer Ariel de Cuba, currently living in Spain, produced the “Quedate en casa” (“Stay at home”) song to upbeat salsa and reggaeton melodies. The song includes lyrics such as “take care of grandma, take care of grandpa, if we are united, we will win,” and was completely produced at home. “The video was recorded by my daughter, in collaborated with my son, and edited by me,” he told Houston Chronicle. The song also inspired 44 fitness instructors in El Salvador, who filmed themselves dancing and working out to the song to promote home workouts during lockdown.

Internationally renowned salsa singer Rubén Blades, who won numerous Grammy Awards, produced a song with Ceferino Nieto to encourage the Panamanian people who are currently under lockdown. The video shows Blades, who seems to sing from his living room in New York, shots of Panama and a zoom-like edition with videos of at people home who sing the chorus “Panama.”

Panama has banned all international flights, implemented a curfew, and, since April 1, it has also put in place a gender-based lockdown — on certain days, only women can go out of the house, on other days, only men. It has been the first and most hard-hit country in Central America, with 144 deaths and nearly 5,000 confirmed cases.

Regarding the pandemic, Blades wrote in his “Diary of the pest” on Facebook that “this is an opportunity to radically alter our behaviors and create alternatives that help us all, and the environment. Let's look at all the possibilities and not limit our concern to the nostalgia of what we were doing before the crisis.”

The band “Los Chuguranos” from Peru sang this “COVID19″ song on Huayno musicality and rhythms. Huayno is a musical genre and popular dance that stems from Quechua and Aymara peoples. It is played throughout the Andean region, comprising Peru, Bolivia, northern Argentina, and northern Chile. Usually, Huayno is accompanied by popular dance.

Here, the band sings “Oh, Corona, my little Corona, you have arrived in my Peru,” followed by “what will become of my life? Surely you will take it”. Later, they sing, “Now that you have arrived, I want you to listen to me: take the settlers, but leave my Peru alone.”

Throughout Latin America, “settler” is the term used for people who enter indigenous territory and engage in activities relating to mining, deforestation, extraction, oil exploration, industrial agriculture, and evangelical churches. For example, indigenous communities in Peru and the NGO Amazon Watch called for a ban on outsiders entering the Amazon to prevent the spread of the virus among the natives.

The singers conclude by exhorting people to listen to public health safety measures and to wash their hands.

In this song, “A Quarantine with Kids,” Muñoz speaks rapidly on a classical piano background reminiscent of a nursery rhyme.

Mexican artist Emma Mayte Carballo Hernández, known as Flor Amargo, produced a humorous cumbia song on the difficulties of spending all your free time in lockdown with a significant other. Cumbia is a musical genre played throughout Latin America with regional flavors.

Usually, Flor Amargo likes to mix cumbia with pop, classical piano, and folkloric music – a mix she calls “cathartic pop,” a sort of improvisation of music and singing without caring too much about the form.

Although the lyrics, intended to be funny, can come across as insensitive to some — she sings, for example, that she “would prefer to be infected and die” than to live 24/7 with her partner — the comments on YouTube seem to appreciate her humor.

René Pérez Joglar, better known as Residente, has recreated several of his biggest hit songs with a “Quarantine version.” He first released “Apocaliptico” and then his more recent autobiographical song “René“, which gathered more than seven million views alone. Every music video is composed of images of his musicians and singers playing from their homes.

Residente also published a quarantine version of his 2011 song “Latinoamérica,” which was originally produced by his band Calle 13 and won the Grammy Award of that year. According to El País, Latinoamérica is “considered an anthem against poverty and for Latin American identity.