The Izoizolyatsiya Facebook group has become a national obsession 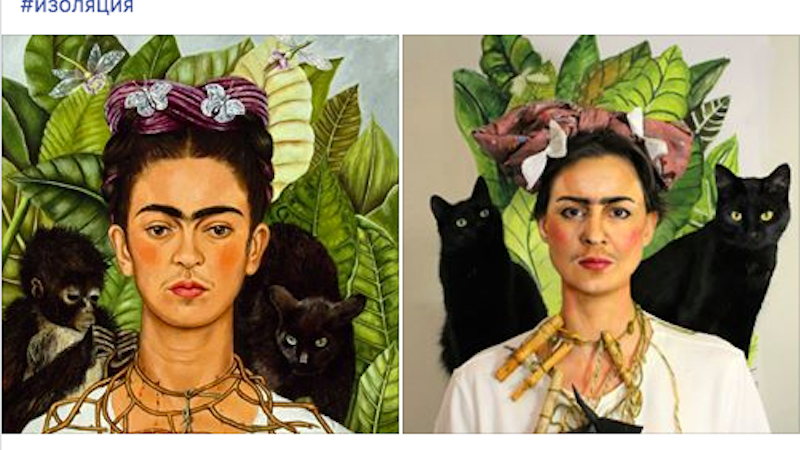 In 1868, Fyodor Dostoevsky wrote that “beauty will save the world.” A hundred and fifty years later, that remains to be seen; but one thing’s for certain — it can definitely distract us from the world outside during a global pandemic.

As people across the world are ordered to stay home, they are searching for creative outlets to keep boredom and the blues at bay. One particular photo challenge has swept like wildfire across social media: recreating famous artworks using ordinary household items.

Surgical masks and thermometers, symbols of the COVID-19 pandemic, are prominent props in these recreations. A man wearing a surgical mask, embellished with an open mouth drawn in marker pen, poses for a domestic version of Edvard Munch's The Scream. Toilet rolls (no less a symbol of this era) serve as a wig for a man sitting in front of a piano, mimicking a famous painting of Mozart. These are just a few examples of the boundless creativity of the Russian Facebook group “IZOIZOLIZACIA”. It is no exaggeration to say that the page has become a national obsession.

The group's name is a portmanteau of the Russian words “isolation” and “visual art.” To date it has over 500,000 members and more than 100 posts per day. And although most members of the lighthearted group are Russians, it connects people from all over the world during this time of heightened uncertainty. Izoizolyatsiya's slogan says it all: “a community of people with limited mobility and unlimited imagination”. The Facebook group’s founder, the 38-year-old Katerina Brudnaya-Chelyadinova, has just a few rules: props must be made out of whatever is found at home, no photo-editing is allowed, and neither are any more renditions of Kazimir Malevich’s “Black Square”— unless they're really funny.

For example, Brudnaya-Chelyadinova, who works for Russian digital giant Mail.Ru, started the challenge by sharing a photo of her husband as Vincent Van Gogh in a straw hat on Facebook. When asked her friends to share their own renditions of famous paintings, many rose to the challenge. To consolidate the immense amount of submissions, she created the Facebook group on March 30. Within a day, it had over 2,500 members.

In an interview on April 17 with the Russian news channel RBK, Brudnaya-Chelyadinova stressed that she is not alone in maintaining and managing the group, whose popularity has soared in the last month. “We have 11 moderators now who keep the group running at every hour of the day from America to New Zealand,” she said. “It's an enormous effort of friends from across the world.”

This international membership reflects the fact that Izoizolyatsiya is just one of many incarnations of the viral art challenge; since the COVID-19 pandemic began, the social media accounts of several art galleries around the world have launched similar initiatives.

Read more:  Moscow's revolution will be memed, online and on canvas

Not surprisingly, Izoizolyatsiya members have a particular love for famous artworks from Russia and the former Soviet Union. “It seems like we’re a bit more self-ironic in this group,” Brudnaya-Chelyadinova admitted in an interview for RuNet Echo.

Indeed, many of the shared pictures are wildly creative and self-deprecating in their recreation of Russia’s most treasured paintings. Vasilii Vereshagin’s mountain of skulls in “Apotheosis of War” is reimagined as scattered Lego heads. Another picture features a cat impersonating a saluting Lenin. Ivan Shishkin's iconic bears in “Morning in a Pine Forest” are represented by crackers against a background of lettuce.

There are some famous renditions of foreign artworks as well. “The Last Supper” is recreated with nurses in the place of apostles; Leonardo da Vinci’s “Saviour of the World” features a model-as-Jesus holding a jar of pickles instead of an orb. Some users wore tutus to recreate Edgar Degas’ famous ballerina paintings. Others donned an ushanka, a Russian fur cap with ear flaps, to portray Van Gogh's famous post-accident self portrait.

The constraints of the challenge has pushed many participants to become experimental with the everyday objects they have at home. One user from Israel posed as Salvador Dali, adorned in heavy makeup and with melting clocks made out of paper. One woman recreated Dante Gabriel Rossetti’s “Pandora”, only the golden box in the painting was replaced with a McDonald’s takeout container. A Jackson Pollock painting was represented by a pile of sticks.

One of the most popular posts in the group, by Natalia Shevchenko, depicts Henri Matisse's 1910 masterpiece “Dance”, recreated with shrimp and walnuts on a plastic bag. It has garnered over 39,000 likes.

Many of these reimagined artworks are also selfies taken by amateur models stuck at home during quarantine. Many more feature spouses, partners, pets, grandparents, and babies. Izoizolyatsiya's Facebook page is full of lonely faces looking for a connection — and clearly finding it.

So like all social media crazes, the challenge raises its own questions: is the recreation of famous art just a fad, or is there a deeper need for connection to art and to one another? Brudnaya-Chelyadinova thinks it is the latter. “On one hand, it’s true that this art challenge is a game,” she concludes, “but it’s also a different way to connect and engage with timeless art and to find comfort in community.”