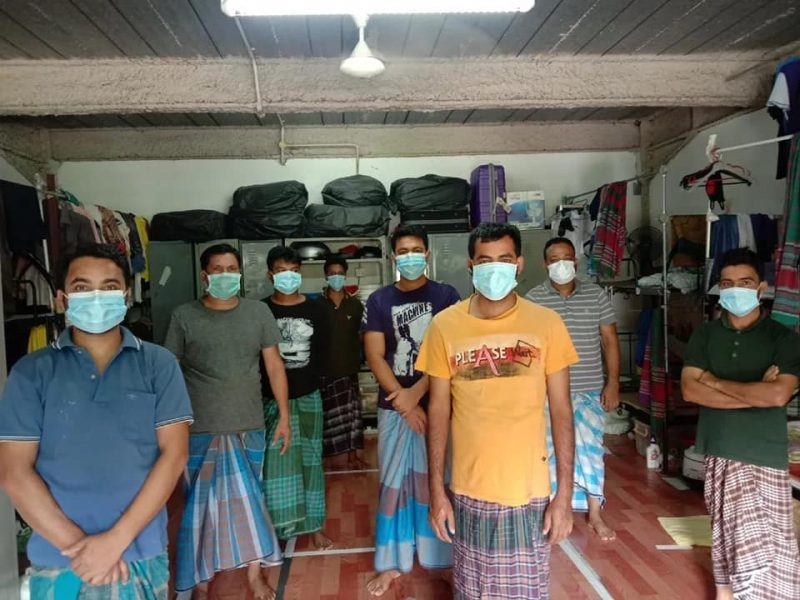 ‘One Bag, One Book’ – a migrant worker-driven initiative promoting reading has become an informal channel to gather essential supplies and donations based on the needs of workers in dormitories. Photo from the Facebook page of ‘One Bag, One Book’. Used with permission.

Singapore has been consistently praised in global news reports for its approach in containing the spread of COVID-19. But since the first week of April 2020, the country has recorded a sharp rise in cases affecting mainly foreign workers. This situation has raised concern about possible neglect by the Singaporean government about migrant workers in its response to the COVID-19 pandemic.

On April 7, the government announced the imposition of a ‘circuit breaker’ which practically placed the whole country and its 5.7 million population under lockdown. Singapore's Health Minister stated that:

We need to apply brakes, hard brakes, to slow the transmission. This is what we mean by a circuit breaker. Enhanced safe distancing is necessary to significantly reduce movement and interactions in both public and private places.

On April 21, the prime minister declared that the ‘circuit breaker’ will be extended until June 1.

As of April 24, Singapore recorded 12,075 COVID-19 cases, almost 80 percent of these are migrant workers who live in foreign worker dormitories. Singapore now has the highest number of COVID-19 cases in Southeast Asia, although the government claims this figure is high due to its extensive and aggressive testing.

Singapore has more than 300,000 Work Permit holders residing in dormitories. Most of them are men from South Asian countries like Bangladesh and India. They live in rooms with bunks for 12 to 20 persons which make social distancing difficult to practice.

Suddenly, many of these dormitories have become COVID-19 clusters where workers cannot leave their rooms as the government deployed medical teams to conduct testing and quarantine procedures.

Singapore quarantined nearly 20,000 workers in two dormitories after they were linked to at least 90 coronavirus infections. Migrant workers living in these camps say they are like a coronavirus time bomb waiting to explode https://t.co/BppsWDV1RT pic.twitter.com/liQSkdS2Hq

There was controversy about the decision to keep a separate category for COVID-19 patients living in these dormitories. The independent Southeast Asian news platform Coconuts reported that:

The government has also made the controversial decision to keep separate tallies: one for migrant workers, and one for Singaporean citizens and permanent residents. It has been accused of “othering” the migrant population, especially by euphemistically referring to citizens and residents as “the community.”

On April 13, the Singaporean Ministry of Manpower inspected the sanitary conditions in factory-converted dormitories (FCDs):

Minor lapses were found in 57 FCDs, with the most prevalent issue being a lack of sickbays and isolation areas. The cleanliness levels of some of these FCDs were also found to be unacceptable.

Minister of Manpower Josephine Teo responded to criticisms that the government should have conducted COVID-19 tests in the dormitories in February by saying:

Because at that time, healthy workers were going to hospitals in droves to ask for tests. The worry was that thousands would show up and overwhelm healthcare workers.

In a televised speech, Prime Minister Lee Hsien Loong assured migrant workers that the government will not abandon them:

To our migrant workers, let me emphasise again: we will care for you, just like we care for Singaporeans. We thank you for your cooperation during this difficult period. We will look after your health, your welfare and your livelihood. We will work with your employers to make sure that you get paid, and you can send money home. And we will help you stay in touch with friends and family.

Transient Workers Count Too, a non-government organization, has been providing assistance to workers in dormitories. It notified the media and the public about workers who were allegedly locked in their rooms by their employer. It also reported that certain medical conditions of workers are not being given proper attention, after the government decided to focus on containing the spread of COVID-19. It also countered the impression that workers are to be blamed for living in dirty dormitories.

The point here is that structural constraints play a huge part in whether a place is clean or dirty. Design of spaces; density of habitation; controls over movement; work-life balance demanded of foreign workers, management systems and procedures — all these count.

It’s not the men. It’s the system. Before blaming the workers at the bottom of the heap, look at the calibre of the people sitting atop it.

Lawyer and former diplomat Tommy Koh wrote on Facebook that the COVID-19 cases in dormitories should be a wake up call for Singapore to treat its workers better:

The government has allowed their employers to transport them in flat bed trucks with no seats. They stay in overcrowded dormitories and are packed likes sardines with 12 persons to a room. The dormitories are not clean or sanitary. The dormitories were like a time bomb waiting to explode. They have now exploded with many infected workers. Singapore should treat this as a wake up call to treat our indispensable foreign workers like a First World country should and not in the disgraceful way in which they are treated now.

Singaporean writer Kirsten Han wrote on Twitter that the problem is “simultaneously a public health issue, a humanitarian issue, a logistical issue, and an economic issue.” Her reminder sums up the lesson that Singapore and other societies need to take heed:

18/ What should we learn from this? I think what we're seeing in #Singapore is that even if you do most things right, if you're not considering or proactively looking out for the most vulnerable and marginalised in your society, you're not going to effectively fight #COVID19.