Azerbaijanis over 65 are not permitted to leave their homes 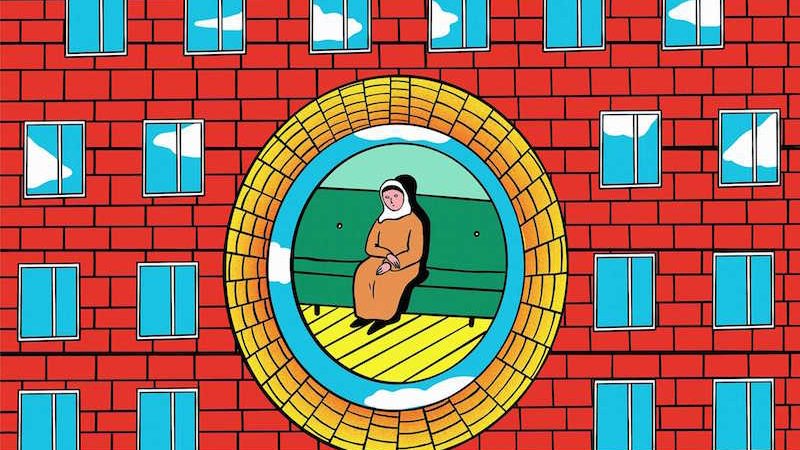 Under the country's strict quarantine regulations, Azerbaijanis over the age of 65 are not permitted to leave their homes. Illustration (c): Leyla Ali for Chai Khana. Used with permission.

The following is a story by Chai-Khana.org and is republished by Global Voices under a partnership agreement. Text by Aytan Farhadova.

Ninety-five year old Sanuber Alakbarova should be able to sit in the garden and enjoy the spring weather in Sumgayit, a seaside city not far from Azerbaijan's capital Baku.She should be surrounded by her children, who used to come by to check on her and keep her company.

Instead, Sanuber is confined to a sofa facing the door because her family fears she could catch the coronavirus.

Azerbaijan has adopted some of the strictest measures in the South Caucasus as its government tries to slow the spread of the coronavirus, which has already infected over 1,500 people in the country. Under the new restrictions, no one over the age of 65 can leave their house at all until April 20. Everyone else needs permission from the police to leave their residences, and outings are supposed to be limited to a special set of jobs or an emergency.

Now Sanuber’s daughter-in-law cares for her the best she can, limiting her contact with the outside world and frequently washing her hands. Sanuber’s grandson, who is allowed to leave the house to work, has been forbidden from spending time with his grandmother, out of fear he could pass the virus to her.

“We told all our relatives not to visit us. My mother-in-law is old, and there is no hope that we will save her if she catches the virus. We often wash her hands with alcohol. Since it is a courtyard house, in hot weather she sits only on the sofa in front of the door, and so on. We also do not leave the house,” Chimnaz Alakbarova, her daughter-in-law, says.

“I control everything. At work, my son was given a mask. I bought disposable gloves for him and told him to change them hourly. I also forbade him to see his grandmother. My mother-in-law also knows that we do everything to prevent her from getting sick.”

The strict measures have received some praise as governments scramble to contain the coronavirus.

“It is commendable that the Azerbaijani government responded to the pandemic crisis in a timely manner and implemented a model of social isolation to protect the population from this rapidly spreading virus and in this case, special attention was paid to the elderly population, which is more susceptible to COVID-19,” says Farid Babayev, head of the Azerbaijan country office for the UNFPA (United Nations Population Fund).

But critics note that the Azerbaijani system was launched without much thought put into how it would effect the elderly, who comprise 6.8 percent of the population.For those who live alone, the new restrictions have made it impossible to do anything — even get their pensions or buy food.

The Ministry of Labor and Social Protection of Population’s Call Service – 142 is now helping citizens aged 65 and older. But residents say they have to pay for the goods they receive — and that is not possible without their pensions.

By April 2, the call center had received 27,486 appeals, out of which 5,278 were related to the provision of social services.

Fazil Talibov, head of the ministry's public relations and communications department, wrote on Facebook on March 26 that in some cases citizens were calling 142 to ask for food assistance or free taxi service.“Social services do not include food aid. Social services include assistance in household chores, purchase of basic necessities, medicines, utility payments, etc. at their own expense,” he stressed.

Economist Togrul Valiyev says the problems with the system illustrate that the government caught by surprise and rushed to implement measures without thinking about the consequences. “If you make it a rule that people over the age of 65 can't go out, then you should have thought through the policy. For example, the government thought that they could pay pensions and that’s it,” he says.

“But now, how to solve the problem of withdrawing pensions from ATMs if people cannot go out? They [authorities] say that they can ask a relative or a social worker to withdraw money from their card. That is actually against the law, you cannot give your PIN to a stranger, how can you control how much they take? […] And even the social services available do not work very effectively,” continued the economist.

In response, grassroots efforts have started popping up in Baku and elsewhere.

One group of volunteers created the Qaranquş Aid Fund to help people during the quarantine. The members and volunteers work with shops to provide the elderly — and others in need — with food and essential goods. Initially, the idea was to shop and then deliver the supplies to people’s homes.

“We have discussed with the team how to minimise human contacts while providing people with food, cleaning supplies and other essential needs. We spoke with one supermarket chain in Baku, Bizim Market, and established a card system and started transferring donations to the supermarket’s bonus cards… So far, we have distributed 45 bonus cards to people in need,” explains Vahid Aliyev, a member of the initiative group.

But economist Nijat Garayev warns that ad hoc solutions will not be sufficient to help those in need during the quarantine. “Retail assistance and support (food distribution, etc.) campaigns by various government agencies or their affiliates (agencies, initiatives, government-funded youth and deliberate actions, etc.) are not strategic and sustainable,” he says.

Garayev notes that the government is facing a double challenge right now because it was not ready for the virus and the international price of oil has dropped dramatically. Nevertheless, he adds that some traditions in Azerbaijan concerning the elderly relieve pressure on the state:

“The fact that the majority of older people are at home and that there is strong family support for older people in society makes the government's job easier. This means that they do not have to deal with hundreds of thousands of elderly people who are in dire need of money and care,” Garayev says. “On the other hand, there are many families today who are at home, unemployed, and their sources of income are completely cut off. It is likely that there are thousands of families in need of old-age pensions, especially in urban areas.”

The only sustainable solution, according to Garayev, is for more proactive assistance from the government. “It would be good if they created a centralised crisis management structure, a social defence structure. They are trying to do that, but it doesn't seem to be a strategic effort. As a result, they cannot achieve the necessary level of social isolation [to stop the spread of the virus].”

For now, the elderly living alone in Azerbaijan have to try to get by as best as they can.

Mavsukha Nasirova, an 81-year-old Baku resident, says she has not received any assistance yet, but is trying to survive with help from her neighbours.

“My young son died… I have been alone since then. I called the ministry once. They said, ‘if you can pay, we will go to the store and buy things [for you],’” she recalls. “But I said, ‘if I had money, I would ask my neighbour, he would buy it,’” notes Mavsukha.

Mavsukha suffers from high blood pressure and diabetes so her biggest problem is that, due to the quarantine, she cannot visit her local clinic to receive free medication. She finally decided to ask a neighbour to go to the clinic to get her free medicine for her.

“I need medicine; the rest is up to whoever gives it. When there was no quarantine, I went to the clinic, where my injections were done free of charge,” explains Mavsukha.

“But ordering medicine home costs money. I receive a pension of 230 Manat [US$135]…But I have not died of starvation yet; I'll probably survive.”