Nepali cartoonists have reacted to the COVID-19 lockdown in Nepal 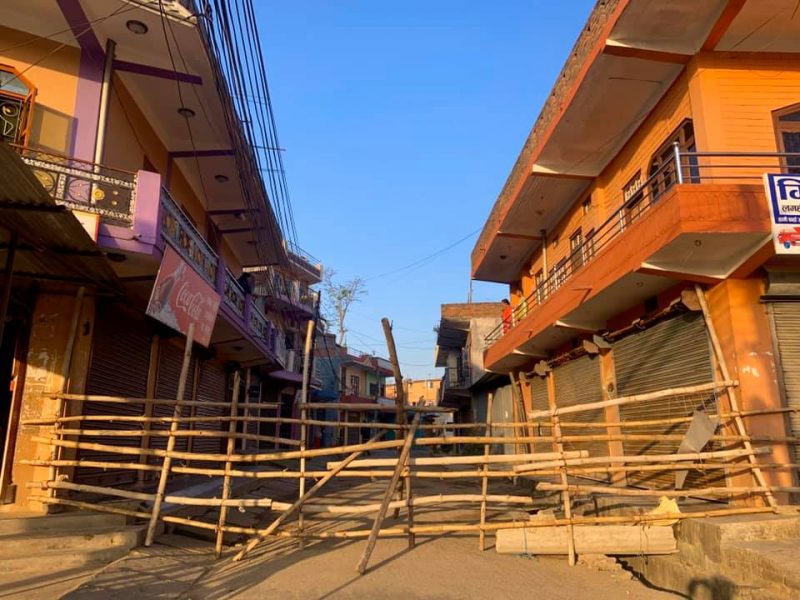 Locals barricade their locality in Lamahi of western Nepal to intensify the lockdown imposed by the government to limit the spread of Coronavirus. Photo by Vivek Chaudhary. Used with permission.

Since March 24, Nepal has been under a nationwide lockdown meant to last until April 27. As in so many countries, the COVID-19 outbreak is exposing social inequalities and testing the capacity of government infrastructure.

As all movement has ground to a halt, Nepalis are being confronted with enormous changes to their daily lives.

Read More: For Nepal's migrant and daily wage workers, lockdown is more dangerous than the coronavirus

Some of these include: hordes of people forced to leave the Kathmandu Valley for their villages on foot, online education and online businesses on the rise, accusations of police brutality while shopping for essentials, among many others.

In response, Nepali cartoonists are using satire and comedy to draw attention to alarming social issues as well as everyday life.

Rajesh KC, a Kathmandu-based political cartoonist, commented on reports of police crackdowns shows on citizens allegedly in violation of the lockdown measures. The security personnel in the cartoon says: “I killed 5 crore [1 crore = 10 million] coronavirus on his back.”

Ways to kill the virus

As the government was responding to the criticism about its virus response on social media, KC posted this cartoon representing Nepal's government fighting with the social media channels.

Rabi Mishra, a cartoonist with news outlet Naya Patrika Daily, illustrated the woes of low wage workers returning to their villages on foot after vehicles were banned on highways. He adds a line by singer and social activist JB Tuhure.

Basu Kshitiz, a cartoonist and artist with the Annapurna Post, criticised the Government of Nepal's response to the virus by drawing the three wise monkeys who see no evil, hear no evil and speak no evil.

Kshitiz also commented on people who were performing relief work in order to get a selfie:

Rabindra Manandhar, a cartoonist with Nepal magazine, takes a jibe at the misinformation being spread by Indian media which alleges that a group of coronavirus-infected Muslims were trying to enter India from Nepal.

[They say] this is what is happening in the neighbourhood.

Abin Shrestha, a cartoonist with news outlet Kantipur, pokes fun at certain types of men who lazily spend their days at home while complaining about the lockdown.

And finally, in a scathing critique of the government of Nepal's response to the virus, Shrestha posted an editorial cartoon depicting desperate citizens being turned away:

Editorial cartoon by @abinshrestha published in Kantipur on Monday.

The man knocking on the door: “Government! Government!!”
The voice from inside the door: “There is lockdown! Can't get out!”