More than 100,000 indigenous families in Colombia face new risks with the pandemic 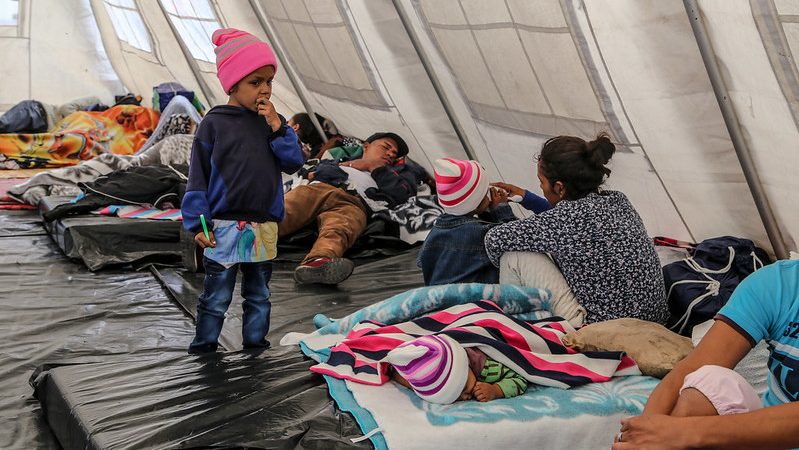 A child with their family in one of Unicef's three temporary rest tents in Rumichaca, Ecuador, on the other side of the border with Colombia. Photo: UNICEF Ecuador/Flickr, under CC license.

Check out Global Voice's special coverage of the global impact of COVID-19.

Much has been said about the Venezuelan migration crisis and the increase in Venezuelan “walkers,” but often sidelined is the fact that some of those immigrants are indigenous – most of whom are from the Wayuu, Warao, Yukpa, and Pemon ethnic groups.

Since 2015, the so-called “Complex Humanitarian Emergency” in Venezuela has driven out more than 4.7 million Venezuelans from the country. The United Nations Refugee Agency (UNHCR) has described this forced migration as the largest exodus in the region's recent history.

What's more, as a result of the COVID-19 pandemic, Venezuela's borders with Brazil and Colombia have been closed since mid-March, thereby worsening the situation of indigenous migrants.

By not being able to use the border crossings — including that of Cúcuta in Colombia — to pick up medicines, food, and other basic products on the other side, the use of illegal paths and crossings has increased, with its related dangers.

More than 100,000 indigenous families in Colombia are currently facing new risks in relation to the COVID-19 pandemic, according to a report from El País.  As stated by the Colombian Ministry of Health, two indigenous people from the Yukpa ethnic group have been diagnosed with COVID-19 on the Colombian-Venezuelan border by early April. According to a report by the local news medium LaFm, around 174 inhabitants in North Santander — including pregnant indigenous women and children — were isolated as a preventive measure.

Although indigenous women represent a small percentage of the millions of migrants, the International Organization for Migration (IOM) warns that they are part of one of the most vulnerable groups.

Dozens are accompanied by their young children or are pregnant. Human Rights Watch says that during their journey they have been walking for an average of 16 hours a day for approximately 13 days.

The other obstacles that they have to face, according to UNHCR, include language barriers. Many of them only speak their indigenous languages and rely on bilingual indigenous men to communicate. There is also a lack of identification documents, thereby preventing access to public policies that could be of benefit to them

Although Colombian authorities said they were actively on the lookout for symptomatic patients in order to prevent it from spreading, they have warned of difficulties, including when the Yukpa people — those living in poverty in approximately 15 Colombian towns — are semi-nomadic, thereby making it difficult to implement the lockdown.

The journey of indigenous Venezuelans across the border

According to Fraternidade — International Humanitarian Federation, migrants experience restrictions, theft, and abuse on the part of the authorities and armed groups throughout their journey. They mainly arrive in Colombian and Brazilian border towns, frightened, tired, hungry and in dire need of assistance. Upon arrival, they explain how their children died due to poor access to health as well as food and basic hygiene products in Venezuela, according to an International Organization for Migration (IOM) report.

According to investigations by the UNHCR and the Venezuelan Program of Action Education in Human Rights (Provea), indigenous migrants have been forced to leave their ancestral homeland in Venezuela because of hunger, disease, violence, and threats related to the use of their habitat and resources.

We decided to come to Brazil because our children were dying of hunger. They were crying from hunger and were only eating once a day in the evening. It was only a small portion.

According to the Human Rights Committee of la Guajira, the mass migration of indigenous people has led to the break-up of families and communities, thereby creating feelings of emptiness and loneliness that are difficult to cope with, given the collectivist structure of their societies.

Johanna Reina, a UNHCR protection assistant in Colombia, says that:

They are facing challenges of identity loss, including their language, and a drastic deterioration in their organizational structures. 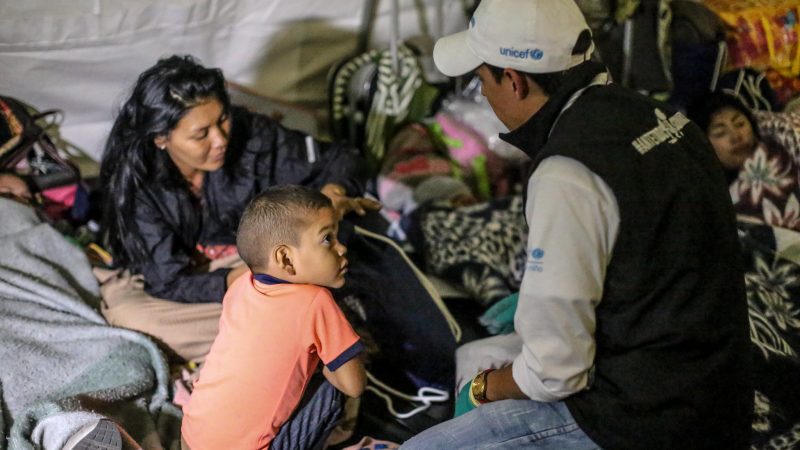 At night, migrant children and mothers come together in a temporary UNICEF rest tent in Rumichaca, on the Ecuadorian side of the border with Colombia. Photo: UNICEF Ecuador/Flickr. Under CC license.

Although the risks are lower when they arrived at their destination, they still exist. The IOM and Provea have noted the concerns and discomfort of certain authorities and host populations regarding the presence of indigenous Venezuelans, which has led to an outbreak of xenophobia and violence.

Both organizations also warn that indigenous migrants could be victims of poverty, labor exploitation and may be sent back to Venezuela without due compliance with legal regulations. By being an ethnic and linguistic minority, and given the proximity of their shelters to human trafficking networks, they run a greater risk of being subjected to prostitution and child abuse.

Added to this are the difficulties that precede this migration crisis. The relationship of host countries with their indigenous communities has historically been complicated, particularly because of the ongoing stereotypes, whose origin goes back to the systematic assimilation policies, according to the IOM.

For all of these reasons, the United Nations Human Rights Council recommends that the authorities punish xenophobia and racism against migrants and adopt a gender-based approach, whilst the IOM suggests adapting the care of indigenous migrants to their ethnic and linguistic minority and gender status.

Indigenous communities have fundamental rights, which include the right to a life free from discrimination and violence as well as the right to free movement.

They also have special rights related to their binational indigenous identity, like Venezuelan and Colombian for instance, including the right to equal and non-assimilationist treatment, to land and autonomy.

Despite these difficulties, indigenous migrants told UNHCR in 2018 that their new situation in Brazil and Colombia was better than the one they experienced in Venezuela, since they are managing to meet their basic needs thanks to the coordination between the governments and organizations.