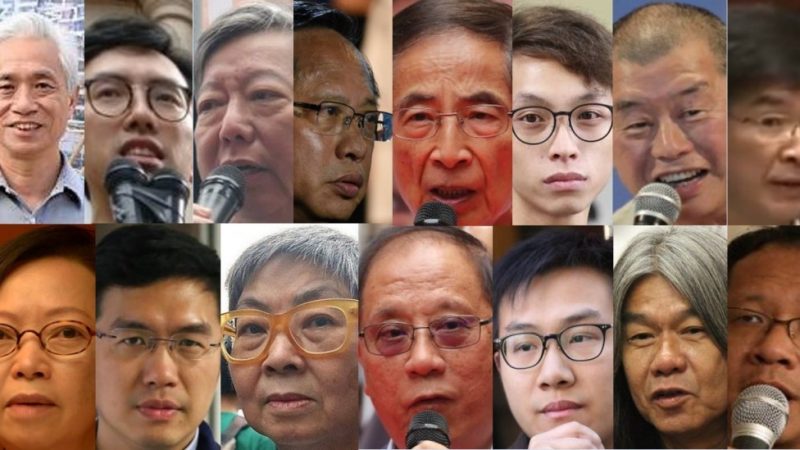 The following post is published on [1] Hong Kong Free Press on 20 April  2020 and is republished on Global Voices under a content partnership agreement.

With the world’s attention focused on the coronavirus pandemic and protesters off the streets, Chinese and Hong Kong authorities stepped up their efforts to crack down on the pro-democracy movement in the semi-autonomous territory.

Over a span of just five days, the city saw its legislature, judiciary, legal system and civil society come under threat culminating in the arrest of 15 key opposition leaders. HKFP summarises key events of the past week.

On April 14, Beijing’s Hong Kong and Macau Affairs Office (HKMAO) and the China Liaison Office in Hong Kong launched a rare attack [2] against the city’s opposition lawmakers, accusing them of “malicious filibustering” in an attempt to stall the election of the chairperson for the Legislative Council’s House Committee.

The job of the House Committee, which consists of all lawmakers, is to scrutinize bills tabled at Council meetings for approval. As pro-Beijing lawmakers are in the majority, pro-democracy lawmakers have been using “filibuster [3]” as a means to stop legislation. As the chair of the House Committee election meeting, legal sector lawmaker Dennis Kwok followed procedural guidelines and gave time for other lawmakers to raise questions. As a result, after 15 meetings, the House Committee has yet to elect a chairperson.

An implication of Beijing's accusation is that the Council could invoke Article 79 of the Basic Law to disqualify a lawmaker condemned for misbehaviour, or a breach of oath, by a vote of two-thirds of the council members. A number of pro-democracy lawmakers have been disqualified over their oath taking since 2016 after Beijing handed down [4] a controversial ruling to “interpret” Article 104 of the Basic Law to state that public officers must swear allegiance sincerely and solemnly.

Following the April 14 statements, the Bar Association urged the Offices to exercise restraint. Meanwhile, Chief Executive Carrie Lam dismissed public criticism that the Offices had attempted to interfere in the Legislative Council.

Alleged interference in the judiciary

Also on April 14, news agency Reuters reported [5] that Hong Kong’s judicial independence and rule of law had been threatened by Beijing’s interference, citing three anonymous senior judges as sources. It also claimed that Chief Justice of the Hong Kong Court of Final Appeal Geoffrey Ma [6] had to contend with Communist Party officials’ stance that “the rule of law ultimately must be a tool to preserve one-party rule.”

Geoffrey Ma was appointed as the Chief Justice in 2010 and the legal sector believes that Ma has contributed to Hong Kong's judicial independence in the past decade. However, Ma is set to be replaced by Andrew Cheung [7] who has overseen a number of controversial appeals, including one which ousted democratically elected lawmakers Baggio Leung and Yau Wai-Ching from the Hong Kong legislature over oath-taking controversy. Beijing has stepped in to reinterpret the Basic Law [8]to provide legal support for the disqualification of lawmakers in 2016. Facing Beijing's direct intervention, the incoming Chief of Justice said [9] it would be “arrogant and ignorant” for Hong Kong’s courts to say what Beijing can or cannot do under a different legal system.

In response to the Reuters report, Ma said in a rare statement that he had not “at any stage encountered or experienced any form of interference by the Mainland authorities.”

Secretary for Justice Teresa Cheng dismissed the Reuters report [10] as “misleading” and cited Ma’s statement as evidence that Beijing did not meddle with Hong Kong’s judicial independence.

Meanwhile, all 30 representatives of the legal sector of the Chief Executive Election Committee, including the Bar Association Chair Philip Dykes, expressed “grave concern” over the allegation.

On Wednesday, the China Liaison Office Director Luo Huining urged the Hong Kong government to step up its efforts to safeguard national security [11] by strengthening legislation and enforcement.

Beijing’s top man in the city claimed that foreign forces had “deeply interfered” in the city’s affairs, though cited no evidence. He said the city’s legal system should be enhanced to avoid becoming a national security risk.

Echoing Luo’s remarks, pro-China figures called for the implementation of Article 23 of the Basic Law, which requires the Hong Kong government to enact laws to prohibit acts of treason, secession, sedition and subversion against Beijing. Ever since its legislation failed in 2003 following mass protests, Beijing and Hong Kong authorities have periodically attempted to reignite talks over Article 23.

On Friday, the China Liaison Office declared that it was not restricted by Article 22 of the Basic Law. The provision of the mini-constitution forbids any “departments of the Central People’s Government” to interfere in the internal affairs of Hong Kong. It also states that any offices set up by such departments must abide by local laws.

The Liaison Office claimed that it, and the HKMAO, were offices set up by the central government had the right to supervise and comment on the city’s affairs.

Although Hong Kong government had explained in official documents that the two Beijing organs was indeed set up under Article 22, it changed its position and stated in the early hours of Sunday that it is now fully adopting the China Liaison Office’s view [12].

On Saturday, Hong Kong police arrested 15 high profile pro-democracy politicians [13], advocates and activists on suspicion of organising and participating in a series of unauthorised assemblies against Hong Kong government's proposal to amend the extradition law [14] between August and October 2019.

Veteran politicians and senior counsels Martin Lee and Margaret Ng, former chair of the Democratic Party Albert Ho, the Labour Party’s Lee Cheuk-yan and media tycoon Jimmy Lai were among those apprehended. The round-up also marked the first time that Martin Lee, 81, and Ng, 72 – both longtime critics of the Chinese Communist Party – were arrested.

The unauthorised assemblies the group were accused of organising were part of a months-long “leaderless” movement [15] against a now-axed bill that would have enabled Hong Kong authorities to extradite suspects to their mainland counterparts. As of mid-March, more than 7,800 people had been arrested and over 1,200 prosecuted in connection with the mass protests and unrest, according to police figures.

“With the world’s attention focused on the COVID-19 epidemic, Beijing and its subservient government in Hong Kong have taken yet another step towards burying one-country, two-systems,” Chris Patten, Hong Kong’s last colonial governor, said.

“This is not the rule of law. This is what authoritarian governments do. It becomes ever more clear, week by week and day by day, that Beijing is determined to throttle Hong Kong.”