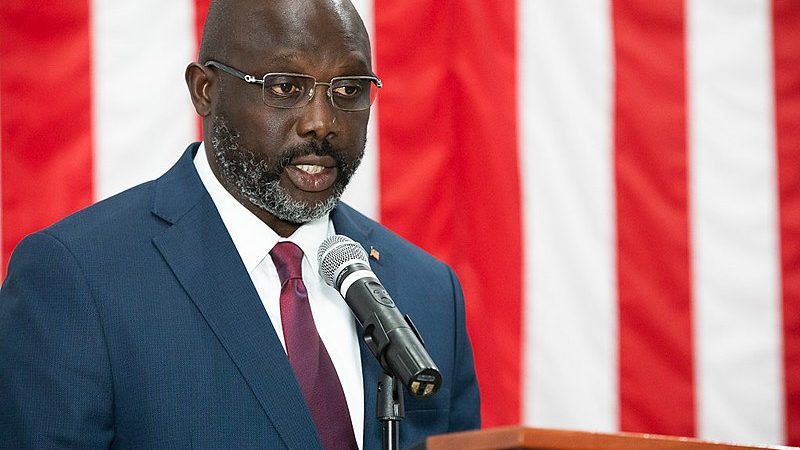 President George Weah at the US Embassy in Monrovia, Liberia. Photo by US Embassy, public domain [1].

Liberian President George Weah — winner of 1995 Ballon d'or in football — has turned to his talent as a singer to help slow the spread of COVID-19.

Together with renowned Liberian gospel and secular musicians, Weah recorded his song to spread  “the message of unity in the country in order to halt the spread of the virus,” writes [4] Gary Connaughton:

We're all in this together. The main message being preached throughout the world is that regardless of your own health status, we can all do our bit to stop the spread of the coronavirus. That means staying at home when possible, practicing good hygiene, being able to spot potential symptoms, and staying away from high risk people. It's fairly straightforward stuff, but it can save lives.

The upbeat song encourages citizens to get together to “fight corona,” with Weah singing “everything is possible. …. let's stand together to fight this deadly disease, now!”

It is not the first time that Weah has tapped his singing talent to address the nation. In late 2019, shaken by violence, protest movements and strikes, Weah released a song called  [5]“Peace In Our Nation, Peace In Our Land,” [5] in which he called for peaceful solutions to the nation's problems.

On April, 8, Weah addressed [6] the nation, recalling the establishment of the Committee on Coronavirus (SPACOC) two months earlier. He also declared a three-week State of Emergency throughout Liberia, starting April 10, 2020, and renewable until the COVID-19 threat ends.

Among other measures, Weah confined four counties to stay-at-home orders. He added: [6]

Hundreds of thousands of persons around the globe have been infected by [the coronavirus], thousands have died as a result of contracting it, and many more thousands are predicted to die. The disease has overwhelmed more advanced health care systems in many countries, and has brought the economies of several developed nations almost to a complete halt…

Throughout this period, residents may leave home only for essential journeys for reasons of health and food, which should be restricted to your local community only, and be limited to a single person per household for a maximum of one hour.

Exceptions were made those deemed “essential workers.”

On Friday, April 17, 2020, members of the Liberian Senate and House of Representatives endorsed Weah's declaration of a state of emergency.

They call for creation of a COVID 19 Emergency Relief Fund that would solicit private donations from individuals, group of individuals, local and international private organizations, business enterprises and any other person interested in assisting the most vulnerable populations of the Republic against the scourge of COVID 19.

According [8] to journalist Leroy M. Sonpon, III, lawmakers went beyond the president's request by granting an initial $25 million United States dollars for a food support program that will include all of 15 counties in Liberia, with the caveat that locally produced food get prioritized — along with vulnerable populations such as youth, homeless, orphanages, senior citizens, people with disabilities and health workers.

A strong solidarity movement has swept through the country that knows first hand the scourge of highly contagious viruses such as Ebola [10] in 2014-2016.

Liberians have generated donations to support COVID-19 interventions and several campaigns to promote education and awareness.

Christopher C. Walker reports [12] on the production of locally-made, reusable face masks in Liberia through the Liberia Initiative for Empowerment (LIFE):

The mask, which is produced in Liberia, would be distributed to hundreds of Liberians and non-Liberians who are residing in Liberia to be used to prevent the virus…

Megan Beare, a volunteer working for Irish aid agency Concern Worldwide, could have been evacuated but chose to stay: [13]

I am also young and healthy. I feel that staying here is just the right thing for me to do so that we can help as many as we can and try prevent any further spread of COVID-19. It is just four years after Liberians celebrated being free from the Ebola virus that killed 4,800 people here in the first year of that outbreak in 2014.

Despite the solidarity, Weah still faces critique in Liberia over a tanking economy. Several protests against the government [14] have taken place in January alone.

Journalist Andrew Green reported  [14]on January 10 that these protests were “the most significant protests in Liberia in over a decade,” according to Elizabeth Donnelly, deputy head of the Africa Program at Chatham House. “President George Weah, having inherited a difficult economic situation, has quickly descended from hero to let-down in the popular imagination,” said Donnelly.

Protesters had demanded that Weah fire his entire team of economic advisers.

Indeed, while Weah has been commended for his singing talents and economic measures in response to COVID-19, Smart News Liberia finds [15] that troubling, new restrictions imposed by Liberian authorities on independent media could undermine public health.

“Only state broadcaster ELBC is granted unhindered access to report what the regime wants,” according to Smart News Liberia.