A wave of "digital protests" strikes a country under lockdown 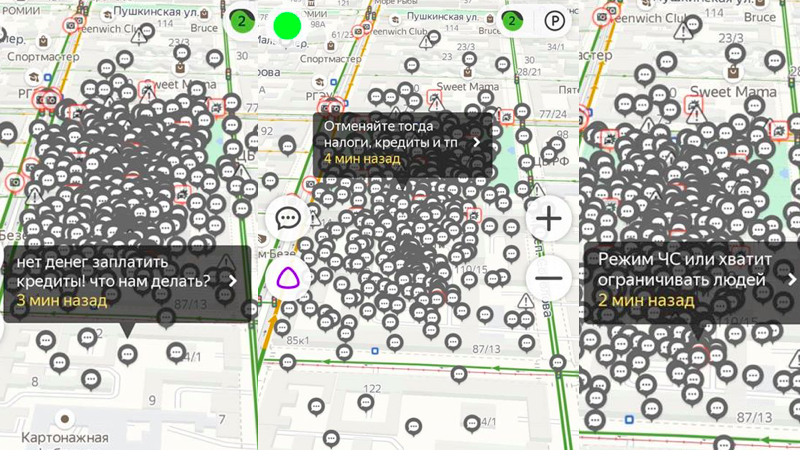 A “digital protest” in Rostov-on-Don, Russia, April 20, 2020. Screenshots via Yandex.Navigator / Facebook. Fair use.

Russia is the midst of a strict COVID-19 lockdown. Although protesters cannot take to the streets, they are still holding mass demonstrations — digitally.

Today, residents of the southern city of Rostov-on-Don gathered outside the local government building to protest the strict self-isolation regime, which has been in force in the region since early April. They also demand the payment of social benefits to those who have lost their jobs as the country fights to contain the pandemic.

These “gatherings” are being conducted through Yandex.Navigator, an application run by one of Russia's biggest digital giants. The popular SatNav tool allows drivers themselves to report on the traffic situation on roads in real time. That feature has allowed users with an axe to grind to tag themselves in politically symbolic locations and write protest slogans in their comments. Many are enraged at the financial losses they have suffered as a result of self-isolation, and blame the state for not offering enough support. “No money to pay off loans! What are we supposed to do?” reads the comment in the left-hand screenshot in the image above. “OK, so cancel taxes, loans, and so on,” and “declare a state of emergency or stop restrictions on people,” read those on the centre and right.

Local media, such as the Don-TV television channel, soon picked up on the protest:

A virtual protest is being held in Rostov due to the introduction of new permits [i.e. quarantine regime restrictions]

Just a few hours later, these “rallies in absentia” had spread across the country, from Moscow to St Petersburg, Yekaterinburg, and Nizhny Novgorod. Suddenly, the application was showing the empty squares and streets of cities in lockdown as “congested”. By the time the feature had arisen in the Siberian city of Krasnoyarsk, the popular blogger Alexander Plushchev asked the following on his Telegram channel:

I feel that by this evening, digital rallies will have taken over the whole country. Don't those in the Kremlin get that?

These rallies are even more resonant given the notorious bureaucratic difficulties of holding protests “in person” in recent years. In Russia, mass protests require prior authorisation from the police — without it, citizens must protest alone, which has made “lone pickets” a staple of Russian political demonstrations in recent years. Under these conditions, online protest is an attractive alternative, particularly when there has been much to protest against of late. In space of a year, Russia has seen mass protests against the exclusion of independent opposition candidates from local elections and most recently against proposed constitutional changes which will permit President Vladimir Putin further terms in office. The No! movement has declared an online protest against the latter, to be held on April 28.

There are no legal obstacles per se to today's “online rallies”. But it may be too early to gloat.

While Russian social media users are increasingly at the mercy of the authorities for strongly expressed oppositional statements online, the comments left on the Yandex.Navigator app were initially not moderated at all. The platform is, admittedly, not the most obvious one for political dissent. However, by late afternoon a Yandex spokesman told the daily newspaper Vedomosti that “any messages which do not concern the situation on the roads or contain profanity are always deleted,” and added that the large number of such messages could interfere with loading the app and therefore navigation.

Right now Yandex is dispersing an “unsanctioned protest” against Putin on Red Square!

Muscovites are leaving hundreds of comments, but administrators are deleting them in multitudes. Try for yourself.

Yandex, like Russia's other digital giants, has come under increasingly strong influence from the government in recent months. It is required to keep data about Russian users in Russian jurisdiction and transfer these data to the security services upon request. Sarkis Darbinyan of Roskomsvoboda, an NGO monitoring online freedoms in Russia, pointed out today in comments to Kod Durova that while Russia's protesters may have been particularly cunning in finding another platform for dissent, that didn't necessarily make them safer:

Of course, they can easily put a stop to all this. Everybody understands that Yandex is on a friendly footing with the presidential administration, and if it issues the appropriate orders, then Yandex will either simply switch off these “little chats” or start cleaning them up manually with the help of its moderators. Furthermore, don't forget that any information about users shouting about a certain “Dutin” who is a “Pick” can be handed over to law enforcement agencies, who can then consider whether to bring a criminal or an administrative case against them.

Against the backdrop of this colourful story, it's important to remember that some Russian citizens are violating the self-isolation regime and are protesting for real. Today, several hundred residents of Vladikavkaz, capital of the Republic of North Ossetia, took to the streets to demand the resignation of the governor of the impoverished region in Russia's North Caucasus. They argue that they cannot afford to self-isolate, and demand financial compensation. Theirs is no virtual protest — and mostly worryingly of all, some prominent protesters entertain conspiracy theories about the pandemic, and believe that the virus poses no threat to their health.