For Nepal's migrant and daily wage workers, lockdown is more dangerous than the coronavirus

"The situation is very uncertain and it’s difficult to survive" 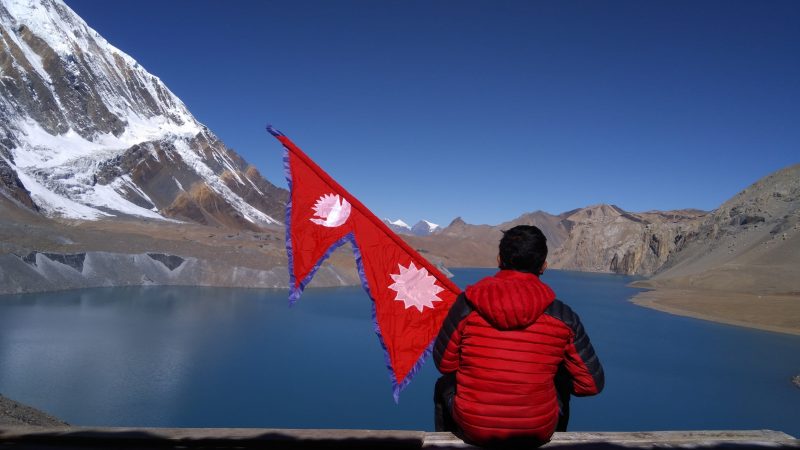 A man sits on the shores of Tilicho lake, Khangsar, Nepal, holding a Nepali flag. Image via Pxfuel, used under a Creative Commons Zero – CC0 license.

The Himalayan country of Nepal is facing an enormous challenge in trying to arrange the safe return and protection of thousands of Nepalese migrant workers who are stranded in the border area between Nepal and India, and in other parts of the world.

The country has been under lockdown for almost a month, with public spaces, transportation services and airports shut down and the borders with India and China completely sealed. Travel into and out of the country, including for Nepalese citizens, is restricted. The lockdown has not impacted everyone in the same way, and migrant workers and daily wage labourers are among the hardest hit by the restrictions.

In the past few decades, many Nepalese have travelled to countries like Saudi Arabia, Kuwait, Malaysia, South Korea and neighbouring India to find work. Close to one-third of Nepal's economy is supported by the remittances sent home by these workers. The government has initiated a process to track down the estimated 4.5 million Nepalese currently living overseas as migrant workers.

Nearly 500 Nepalese migrant workers are stuck at Nepal-India border desperate to get back home, as they have no shelter or food. Many of them are sleeping on the street and some are risking their lives to cross the border illegally.

Migrant labourers stranded at Indo-Nepal border town of Dharchula, UP due to the lockdown amidst Coronavirus outbreak. The Central govt has ordered all the states to seal their borders & to keep a tab on the movement of people#coronavirus #21daylockdown pic.twitter.com/GB44l16IwT

Nepalese migrant labourers living overseas in countries such as the United Arab Emirates also find themselves at considerable risk. Amidst the pandemic and lockdown, Qatar has suddenly deported hundreds of Nepalese without any backup support, while thousands of workers are still living in the camps of Qatar without jobs and proper shelter.

The human rights advocacy group has accused the Qatari authorities of rounding and expelling dozens of migrant workers after telling them that they were being taken to be tested for Covid-19 in March.
I reported. @amnesty @amnestynepal
https://t.co/FAP6VIW9NA

In addition, more than 655 COVID-19 cases are Nepalese overseas migrant workers. Many migrant labourers are seeking the government’s support to return home, but the government of Nepal is neither willing nor ready to facilitate their safe return.

Migrant workers in the Middle East live in fear of more layoffs and deportation. Journalist Dewan RAI writes on Twitter that:

In an op-ed on the Nepalese news site My Republica, social scientists Prakash Bhattarai and Rajendra Senchurey outlined the challenges they believe Nepal will face if many migrant workers eventually returned home as a result of the fallout from COVID-19:

A growing negative narrative on migration and migrants is identified as another significant impact with the beginning of the COVID-19 crisis. [..] It is quite important to create new narratives to challenge these stigmatizing narratives. [..] Post-COVID-19 development policy should also emphasize making use of the knowledge and skills that returnee migrants have brought along.

According to reports, since the lockdown thousands of people, including stranded students and jobless day-labourers, have been returning to their villages from big cities like Kathmandu, Pokhara and Chitwan. Many domestic migrant workers were faced with a dilemma as transportation services were shut down, making it difficult for them to return to their home districts. Many started making the journey on foot.

Record Nepal, an independent digital publication based in Kathmandu, published an interview with a migrant construction worker who was asked why his fellow workers were fleeing the capital:

Why are migrants fleeing Kathmandu? #lockdownspecial

Rohinda Manda: We have no jobs since the lockdown began, and it’s extending every week. We are staying at home, running out of food and money. We don’t have any other friends or support systems like in the village. The situation is very uncertain and it’s difficult for us to survive in Kathmandu. Therefore, we are obliged to walk home on foot even though the journey is long and difficult. We are in a group of 10 friends going in the same direction. It will take at least 4 days to reach home. But we will slowly make our way home because there’s no option left for us.

Record Nepal also published the story of one man who died while making the journey back home on foot.

#Nepal‘s first #COVID19 related death – not because of the virus but because of desperation. Important read @recordnepal. Nepali state has once again failed its most vulnerable citizens! https://t.co/D53YTV3rD7

On April 17, 2020, the Supreme Court of Nepal passed an order mandating the government to repatriate vulnerable migrant workers abroad and to arrange free transportation for all citizens heading home to ensure they travelled safely. The order included a requirement that people suspected of having COVID-19 be quarantined before they are sent home.

Nepal Supreme Court tells govt to use its embassies to identify Nepali migrants working abroad to ensure they are getting COVID-19 treatment per WHO rules, w/o discrimination, and to bring back any vulnerable migrant workers: https://t.co/VsanEhIPUd

It may be too soon to determine and how efficiently the government implements these mandates, given the country is under lockdown.

According to the statistics, since the first case of COVID-19 was detected on January 24 Nepal has had only 30 confirmed cases and two recoveries at the time of writing. The list includes 13 people who had recently returned from countries including the UK, certain parts of Europe and Dubai, and 12 Indian nationals who came to Nepal to attend a religious conference. While the number of cases reported inside Nepal is relatively small, there is still fear of an outbreak as there are concerns that the testing taking place in the country is insufficient.

The Nepalese government is focusing primarily on immediate health needs, but in order to save the country from a larger socio-economic crisis, it should also address the issues of vulnerable citizens. The government should also be preparing long-term strategies in consultation with experts for how the country can be released from the current lockdown.