Weinstein is merely one prosecuted rapist out of the thousands 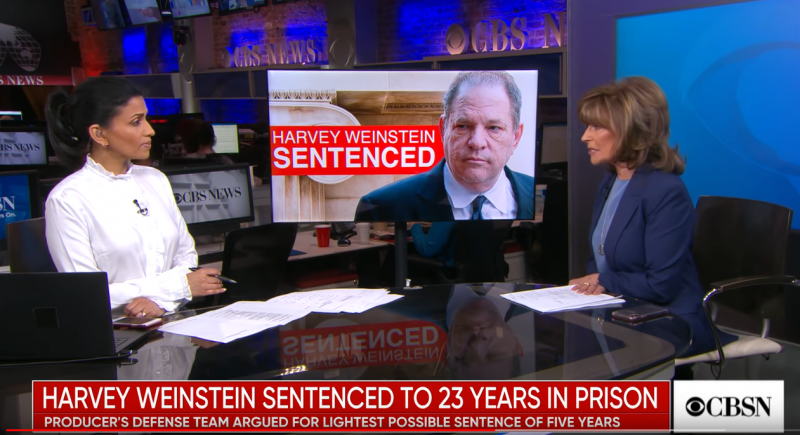 So finally, Harvey Weinstein was condemned to 23 years in jail. While this judgment, announced on March 11, was welcomed by many, the trial that led to it was a demonstration of how excruciatingly difficult it is for women to obtain justice for sexual assault.

As a rape survivor myself, and someone who has supported survivor friends through botched trials and PTSD, I cannot help but think of Weinstein as merely one prosecuted rapist out of the thousands who run free. I have also signed this story with a pseudonym to protect my identity, as I have not recovered completely.

Weinstein was convicted for the rape of two women. Six women testified as to his deeds, sharing harrowing testimonies of abuse and violation. All in all, 15 women accused him of rape, while an additional several dozen accused him of sexual harassment over the course of more than two decades. The fact that he will finally serve some time in prison won’t bring back the careers he destroyed, nor soothe the wounds he left on women’s bodies and psyches.

According to the statistics of the US Rape Abuse and Incest National Network (RAINN), fewer than a quarter of sexual assault cases are reported to the police (230 out of 1,000, to be precise). The reasons for this are multiple. Among them is the inability of many survivors to name what happened to them, fear of reprisals by the rapist, or a desire to protect the rapist, the situation in my case.

Like the majority of survivors, I knew the man who raped me: I dated him. He loved poetry and literature. He came from an abusive family but seemed to have overcome his trauma. He got through university, liked grabbing a drink with friends, and forcing unprotected sex on me, no matter how many times I said ‘no’. And although I considered myself well educated on gender-based violence, the idea I could be assaulted by my partner was so alien that it took me nine months to realize that what he did counted as rape.

But I still did not want to report it because it would be his word against mine. Moreover, I would often think that he had “enough on his plate” because of his difficult childhood.

The hurdles for rape survivors do not stop at their decision to report or not — out of 1,000 reported cases, only 46 lead to prosecution. Why? Part of the answer lies in how rape cases are handled by untrained police officers. Among my friends and activist circles I have heard of too many cases of mishandling or misplacing of evidence by the police.

Added to this is the attitude of incompetent officers towards victims, which prevents the latter from speaking up. Survivors complain that officers ask them “what they were wearing” or blamed them for “going out late”. The simple fear of being treated similarly would deter me from filing a complaint.

Within the legal process, survivors are ordered to recount their ordeal again and again, a deeply traumatic experience, and an inefficient one, too. As traumatic amnesia quickly kicks in, many people are not able to remember details as vividly, resulting in minor inconsistencies that end up weighing against them. Mental shock can also cause victims to dissociate emotions from events, which may make them appear detached. This contradicts the image of the “distraught-victim-of-an-unknown-man-in-a-dark-alley,” and many police officers have not registered complaints because they did not deem the victim credible enough. This is particularly well exemplified in the case of the trial of Marie Adler, the story of a botched assault inquiry that was adapted as a Netflix series.

To return to RAINN’s statistics: nine cases out of 1,000 will be dealt with by a prosecutor. Out of those, only 5 lead to a trial. And out of these, 4.6 rapists will serve prison time.

Even when trials do occur, they are not walks in the park: every detail of a plaintiff’s life is put under scrutiny. Their “morality”, their sex life, their mental health, their bodies.

In France, 11-year-old Sarah, assaulted by a 28-year-old man, was not considered to have been raped because she looked “older than her age” and appeared calm. Therefore, the trial against her aggressor was based on whether she had consented or not.

Recently, a friend of mine who is a rape survivor was told, in a Western European court by the lawyer defending the man who raped her, that she “did not want to tell her boyfriend she had sex with another man, so she accused him of rape.” The sneering remarks of defense attorneys wound plaintiffs deeply. Chanel Miller, the plaintiff in a 2016 case involving students at California's Stanford University, for instance, was depicted as a heavy drinker by defendant Brock Turner's lawyer, who taunted her to the point that she had to be excused from the courtroom.

While fewer than five sexual assault cases out of 1,000 end up with a condemnation, one in six women in the United States has been raped at least once in her life. In France, this number is one in 10, and in Belgium, one in 5.

Pondering these statistics as you scroll through your Facebook friends list is a horrible calculation to make. But a statistical exercise I find people even more reluctant to do is to wonder how many of their friends and relatives have committed rape. If out of six women has been assaulted at least once, we are all very likely to have at least one rapist among our loved ones. How many have been denounced, prosecuted and sentenced?

The idea that rapists are visibly devious perverts is at best inaccurate, at worst very damaging. It's an idea that makes it impossible for us to imagine that any of the talented, kind and generous people we know could have assaulted someone in their lives.

Meanwhile, the road to recovery is steep. It includes everything from PTSD to depression and eating disorders. The healing process is full of breakdowns, but also resilience. Speaking for myself, and for many of my friends, one does not forget—one just learns to carry on and live with our surviving selves.