Even with a law, São Paulo's municipalities are not fulfilling citizens’ right of access to information

Despite the law, municipalities do not reliably respond to requests for information sent by citizens | Image: Fellipe Sales/Agência Mural

This story was written by Paulo Talarico and Priscila Pacheco. It is published here through a content partnership between Global Voices and Agência Mural.

The website of the City Hall of Diadema, a city in the Greater São Paulo's area, appears to have transparency over public data. But that's just the appearance.

When accessing the page, a notice shows up for residents to participate in the discussion on the municipality's guiding plan. On the government tab or near the footer you can find the Transparency Portal, an online tool for increasing fiscal transparency of Brazil's federal government.

There you can find LAI (Access to Information Law) page — a law created in 2011, which regulates the access of Brazilian citizens to public information. Agência Mural filed a request on August 9 for data on the implementation of the management plan of Diadema's Mayor Lauro Michels, reelected in 2017. The system was scheduled to respond by August 29. Almost three months later, no response.

Diadema's lack of transparency is not an isolated case and is the reality for residents of almost half of São Paulo's metropolitan region. Agência Mural requested data on the target plans of all 39 municipalities in Greater São Paulo — 17 ignored the requests.

The legislation stipulates that all public agencies in Brazil are obliged to disclose information when requested to do so by any resident (except when the information is classified as secret). But the law is frequently breached by municipalities. The situation is particularly bad in populous regions such as Greater São Paulo, where 21 million inhabitants (10 percent of Brazil's population) live.

In some cases, even the pages to file requests for information were not found, and in others there was no option to appeal if the request were not answered. Both are obligations of municipal governments according to LAI. 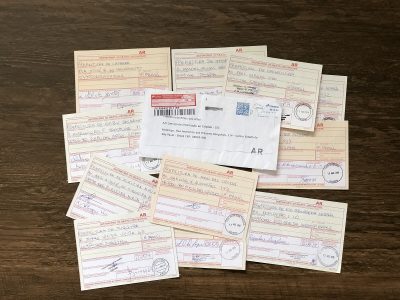 The report made a request by post for municipalities that had no electronic platform | Photo: Anderson Meneses/Agência Mural

Claiming to be transparent is a hallmark of candidates in Brazilian elections, but that changes when politicians take power.

When he ran for mayor in 2016, Marcus Melo, the mayor of Mogi das Cruzes, made a point of noting in his government plan that he would “expand the tools of transparency and public administration social control”. Three years later, this is not the reality.

With 400 thousand inhabitants and a budget of BRL 1.6 billion (around 300 US dollars) per year, the municipality still lacks an easily accessible page. Since we couldn't find the e-SIC (the form where citizens can file for requests online), we sent a request by letter. The municipality contacted us and said it needed a personal document and a phone number to file it.

The document was sent on August 15. Four days later it was filed. Three months passed and no response was received. There is no way to appeal.

Jamile Santana, 31, co-founder of the website Painel Jornalismo, also had problems accessing public information. Jamile says she has filed complaints with the Public Prosecutor against Mogi das Cruzes and Guararema, a neighbouring municipality.

In the legal action against Mogi, she highlighted the obstacles she encountered in the e-SIC, including the lack of an option to make an appeal when filing, on June 12, a request for access to the list of debtors enrolled in the municipality's active debt.

The local government missed the 20-day deadline and on July 3, without requesting an extension, informed Jamile that the Transparency Portal was not the right approach. It stated that the request should be made in writing and in person using the General Protocol at the site of attendance. The action, however, was shelved by the Attorney General's Office.

In Guararema, the problem brought before the Public Prosecutor's Office was that an appeal had been evaluated by the same person who had rejected the application before. Jamile had sent a request regarding ISS (tax on services) by email and received an incomplete reply from the head of the financial section.

“I asked him, where do I enter an appeal? I submitted the arguments there, and it was the same manager who had attended to me the first time,” she said. According to Article 15 of the LAI, the appeal must be evaluated by someone of a higher rank.

The lack of compliance with the LAI in Mogi das Cruzes was identified by the State Court of Auditors. In his August 2019 assessment, Councilor Sidney Beraldo listed five types of failures. “Although a citizen information system has been created, there is no municipal legislation dealing with access to information,” he said. Nevertheless, the Court recommended approving the accounts audited.

This lack of transparency is similar to that found by Agencia Mural in 2018, when we identified at least 20 municipalities that hamper access to public information. At the time, most of them had no apparent e-SIC.

However, that time, we chose to send the requests by letter to the municipalities in which we did not find a system or where there was a problem that prevented the process. Thirteen letters were sent by post.

In May, the NGO Article 19 released a report with the results of an evaluation of the e-SICs of the 26 states and the Federal District, the Comptroller General of the Union (CGU), the Senate, the House of Deputies, the Supreme Federal Court (STF) and the Superior Court of Justice (STJ).

No institution achieved 100 percent of the defined criteria, with the CGU having the highest score, 93 percent, followed by the states of Alagoas and Maranhão, both with 80 percent. In Roraima it was not possible even to register, because the system was offline.

Why are we not fulfilling the law?

But what leads a municipality to not comply with a law which has been in force for seven years? We asked Fabiano Angélico, an expert in public transparency.

One of the points is that small municipalities may have difficulty establishing the necessary structure. Technology and a team are needed to meet the demand.

However, municipalities with budgets of almost BRL 3 billion per year (around 580 million US dollars), like Barueri, also ignored requests made by Agência Mural. Governed for the fifth time by Rubens Furlan, his office did not answer questions about the LAI.

Sometimes managers also lack interest in the topic. “Political will is something created. It's the people, NGOs, local journalists, who get the municipality to act,” Angélico says.

For him, the more requests, the more chances of the law being used effectively. “It is very clear that states and municipalities have no more excuses,” he says.

He explains that there are three ways to demand improvements in information access. The first is to mobilize public opinion, to take the issue to the city council for councillors to denounce the situation, or to media outlets working in the city. The second way is public prosecution and, finally, the State Audit Court.

Especially in the case of journalists, it is recommended to act together, particularly in smaller municipalities, for security reasons. “The Brazilian Bar Association (OAB) filing a complaint about non-compliance, for example, may have more weight with the public prosecution service,” Angélico said.