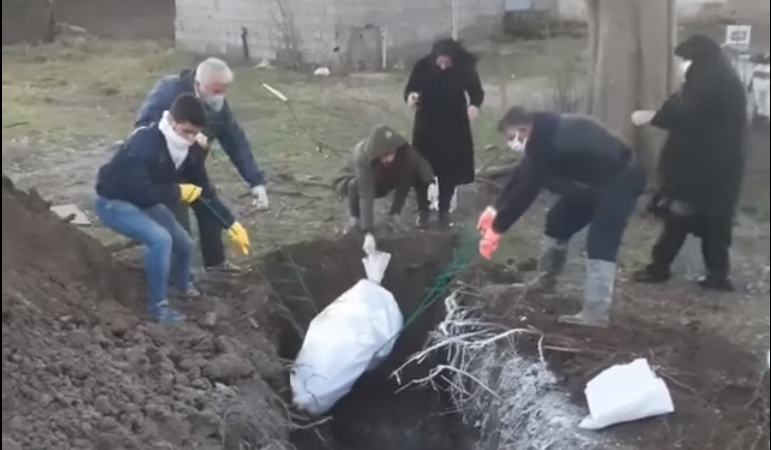 Iranians burying corpses of COVID-19 victims in Gilan province in the north of Iran. Screenshot from a video posted on Facebook by user Begoonah. (WARNING: the video contains images that might be disturbing to some viewers).

Since the outbreak of COVID-19 started in Iran in February 2020, internal political clashes have prevented the authorities from adequately responding to the pandemic. As a result, Iran has become one of the worst affected countries: as of April 10, more than 66,000 Iranians have been infected and more than 4,000 have died, in a population of over 80 million.

A government caught in its own contradictions

On April 1, Iranian President Hassan Rouhani declared in a cabinet meeting that the country was on the right path in the battle against COVID-19. After thanking Iranian healthcare workers, he said that “cases were on a downward trajectory in most provinces” of Iran.

But the Iranian Health Minister Sayed Namaki sent a different message in a parliament hearing on April 7, stating that Iran was still managing the pandemic and had not yet contained the spread of COVID-19. He also warned that the statistics curve should not be a source of “pride and neglect.”

The health minister's concerns were echoed in a parliament debate on the same day over whether or not to impose a nationwide lockdown, with some members advocating for a lockdown. Abdul Karim Hosseinzadeh, an MP from Tehran, argued that a lockdown was necessary to protect the lives of health workers and ordinary citizens.

As this netizen points out, the Iranian government is sending mixed messages:

“Hussain Rouhani: ‘The infection cases were on a downward trajectory in Iran.’ According to the Health Ministry, this statistics shows the number of infected people are on the rise. I think someone needs to explain the difference between the downward and upward trends.”

On April 11, however, President Rouhani asked all Iranians with low-risk jobs to return to their workplaces, adding that the country was past the peak of the epidemic.

The weight of religion in Iranian politics

Since religious leaders took power in the 1979 Islamic revolution, Iran's political life, including important decision-making at the highest levels, is in the hands of senior members of the clergy. The role of head of state is assigned to the Supreme Leader of the Islamic Revolution, a position currently filled by Ali Khamenei.

The virus has been spreading fast inside Iran, affecting the country's senior leadership. Members of Iran's parliament, including the advisor to President Rouhani, officials of the health ministry, and religious scholars have tested positive, with some fatalities. Many officials were tested in spite of having no symptoms, while testing was only available to ordinary Iranians who showed symptoms.

“This test is free for patients who have symptoms,” said one doctor, on condition of anonymity. “I think it is unethical that officials are tested without having symptoms. With our limited testing kits, patients need more tests.”

As the virus spread, Khamenei ordered the Guardians of the Revolution, a branch of the army in charge of protecting Iran's political system, to take charge of battling COVID-19. The same disagreements emerged: while Maj. Gen. Mohammad Bagheri, the commander-in-chief of the Joint Armed Forces, wanted to announce a lockdown, the government refused to do so.

“With so much pressure on Iran, the Iranian government does not want to impose additional pressure on society,” journalist Behzad Pour Saleh wrote in an article for BBC Persian. “Besides, cities in quarantine and travel restriction all require a well planned chain of command, something Iranian authorities lack.”

This netizen shares a video in which people wearing decontamination suits complain about the situation in hospitals:

“This is how bad the situation is in Bana Hospital!! The hospital lacks protective gear, gloves and even body bags. Shame and hate to clercs, where did the international aid go? French aid was directly sent to Lebanon! It means Lebanese are more important than Iranian Kurds. The regime wants to eliminate Kurds, a clear fact.

Iran's announcement of its first case came rather late, on February 20 in the city of Qom, a holy site for the majority of Muslim Shia believers. Given that the period of incubation is at least two weeks, the people who died in February could have been infected as early as late January. As this journalist testifies:

#Iran’s Min. of Health to MPs: On Feb 19th I told the cabinet we’ve patients with signs of #COVID19 in the city of Qom. I was told to not publicize it till after the parliamentary elex. (Held 2 days later. Plenty of evidence they knew weeks before Feb 19) pic.twitter.com/tTv46c9Qqv

Despite the writing on the wall, President Rouhani initially refused to acknowledge the pandemic. He said in a televised national address on February 25 that “it was a conspiracy of the enemy to lock down the country by spreading fear of COVID-19,” adding that “suspected cases should be admitted in hospitals, but all others should continue to go to work.”

Eventually, Qom city turned into the epicenter of the pandemic in the country. The government announced the closure of shrines on March 13, nearly one month after the spread of the virus, a decision hardliners described as “following blindly the anti-religious instructions of the World Health Organization.”

With no travel restrictions imposed, many Iranians also continued to travel and visitors from neighboring countries returned to their homes, carrying the virus. In many countries, including Afghanistan, Iraq, Canada, Lebanon and the Gulf countries, the virus was traced back to Iran.

The lack of coordination is obvious. As Kianush Jahanpur, spokesperson for the Health Ministry, observed in a tweet, on March 23 large crowds gathered to mourn the death of a commander of the Islamic Revolutionary Guard, against all public health protocols:

There are possibly new health measures in place for funeral and for imposing restriction over gatherings. This photo speaks for itself. All we can do is cry. No comment.

Foreign policy gets in the way of international aid

Clashes of opinion between the armed forces and the government also emerged in relation to the issue of foreign aid. Foreign Minister Javad Zarif requested aid from the International Monetary Fund (IMF) for the first time in six decades. The appeal faced a veto by the US under its “maximum pressure.”

The US offered aid directly to Iran, but Tehran refused to accept it. “You are accused of having created coronavirus,” wrote Khamenei in a tweet. “I don’t know if it is true. But when there’s such an allegation, can a wise person trust you? You could be giving medical drugs that spread the virus or cause it to remain.”

With respect to all countries and international organizations that have offered offered Iran aid in battling COVID-19, our policy toward humanitarian aid by foreign countries and organizations is that and institution will be received as much as it wishes to help.

Iran's ambassador to France, Ibrahim Qasemi, said that the Paris-based international aid organization Médecins Sans Frontières (MSF) had chartered a plane to send personnel to help Iran fight the pandemic and were setting up a temporary hospital in Isfahan.

At the last minute, however, MSF was denied entry. Basirat, a news site owned by the Iranian armed forces, published a story claiming that MSF was coming to examine symptoms of COVID-19 Iranian patients and design a new virus or drug that would only affect the DNA of Iranians.

Instead, hardline Islamists of Iran claimed that they were ready to help Europeans. A group of young members of the armed forces prepared care packages to help “poor Americans.” Health Ministry spokesperson Kianoush Jahanpour said, however, that the country was not in a position to help other countries.

“There is no need to help poor Americans. Give glove sand a facemaks to these dear people who are at risk of infection.”

While the various powers within Iran clash over policy, ordinary people have continued falling ill and dying of COVID-19.