‘We’ve paid our rent, we have legal status' 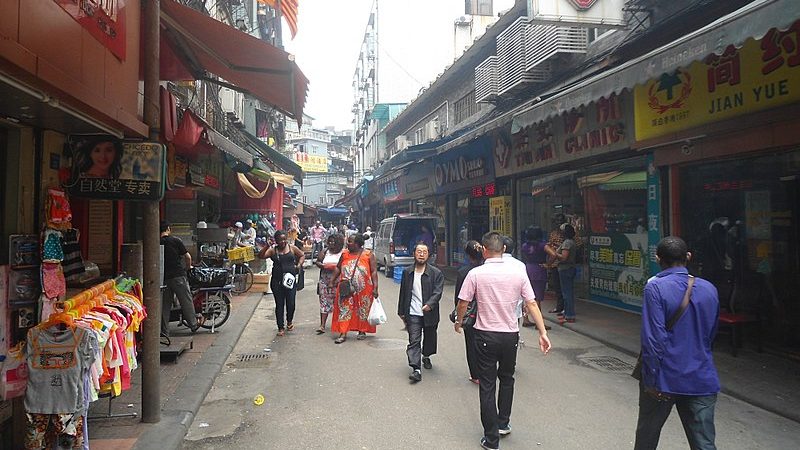 As the COVID-19 pandemic epicenter shifts from China to the rest of the world, anti-foreigner sentiment has spread like wildfire on Chinese social media.

In the past few weeks, China has seen a surge in the number of imported COVID-19 infected cases from foreigners and Chinese returning from abroad and the authorities have started targeting foreigners in an attempt to prevent a second-wave COVID-19 outbreak.

The African community in China is not the largest foreign population, but Africans have become the most visible targets of virus control measures and xenophobic sentiments.

Evictions of Africans in Guangzhou

In the past few days, a number of media outlets reported that a large number of Africans in Guangzhou are being evicted from their apartments and hotels and were forced to take COVID-19 tests and quarantine for 14 days:

‘We’ve paid our rent, we have legal status in the country and yet we’re being evicted and given an hour to leave’ – the words of members of the #African community in #Guangzhou pic.twitter.com/rqIKmSC70z

Most of these evictions have taken place in “Little Africa,” a district near Guangzhou's city center where many Africans have settled for business and education.

The city government said on April 7 that five Nigerians have been infected allegedly from eating at a restaurant in Yuexiu district where Little Africa is located. The small outbreak has led to the shutdown of Little Africa trading activities and left local residents in a panic. Landlords and owners of hotels decided to kick out Africans from their properties.

This is what African nationals are passing through now in Guangzhou china after coming out from quarantine centers hotels have refused them . This is evil pic.twitter.com/IPHplEfV90

As hundreds of Africans from Nigeria, Kenya, Ghana and elsewhere were made homeless and forced to sleep in streets, representatives from African countries expressed outrage.

The chairperson of the African Union, Moussa Faki Mahamat, summoned the Chinese consular on April 10 to express concerns about these allegations of maltreatment of Africans in Guangzhou.

On the same night, the Nigerian consular-general in Guangzhou, Anozie Maduabuchi Cyril, confronted law enforcement officers and protested against the discriminatory act of “picking on Africans” in the country’s latest round of virus control measures:

In Nigeria, we have a lot of Chinese, I don’t think you have ever received any information that the Government of Nigeria go to their various houses and pick them for quarantine, so why are Africans and indeed Nigerians being targeted in China?

The latest hostility against Africans rose after an incident related to a Nigerian man who attacked a nurse while attempting to escape from isolation after he tested positive for the coronavirus in Guangzhou on April 1.

As the video of the incident went viral, more rumors about a second-wave outbreak among Africans in Guangzhou triggered a panic in the city.

As of April 11, the current majority of COVID-19 is through local transmission in Guangzhou with 347 cases. There are 119 imported infections and the majority are Chinese returning from aboard.

On April 10, Guangzhou city government also revealed that there are only 30,768 foreign residents in Guangzhou — the majority are from South Korea (4,600) and Japan (2,987), and the total number of Africans is 4,553. Due to the coronavirus outbreak, a large number of foreigners have left China and the global travel ban has reduced a majority of foreign travelers to China.

While official data shows that the perceived “threat” of the African community is no larger than other communities in Guangzhou, local media has downplayed domestic infection figures and instead highlighted foreign imported cases in the past few weeks.

This has portrayed foreigners as potentially “infectious” and, among the foreign population, Africans are most visible because of their skin color, making them easier targets for harassment.

The outbreak of xenophobic sentiment in Guangzhou has taken place against the backdrop of popular patriotic discourse that labels foreigners as uncooperative and who receive “extra-national treatment” — a popular political term used to describe classes who enjoy more privileges than the average citizen.

In addition to the nurse attack incident in Guangzhou, numerous reports and videos have fueled this xenophobic discourse online. In one report, three foreigners — one of them who has dark-colored skin, jumped a coronavirus testing queue and yelled, “Chinese get out!” after a crowd surrounded them in the Loshan district of Qingdao city. In another report, a Chinese student returning from abroad ran away from an isolation center. In another story, a British man related to a Shanghai family enjoyed the privilege of home quarantine instead of staying in a state-run quarantine center.

I do not reject foreigners, but I reject foreign trash and oppose extra-national treatment. In this global village, we are a country which is ruled by law. It is necessary for us to be open, but I wish for the administration and community service organizations to follow the law and do not lower your dignity and lose your confidence by giving foreign trash extra-national treatment.

On April 10, the China National Immigration Administration issued a statement that foreigners would be expelled if they refused to cooperate with virus-control measures. Expelled foreigners could be banned from entering China for a maximum of 10 years. Chinese Community Party-affiliated media outlet People’s Daily echoed this online populist sentiment:

Foreigners who reject quarantine measure will have to bare legal responsibility. The red line is placed in front of everyone. Those Chinese who have left, they bring back misbehavior, those foreign son-in-laws, they act in a self-righteous manner. In front of the law, no one can misbehave and no one should be humiliated to keep the harmony. Acting according to law is the reasonable way. This is an open country and we welcome our guests with hospitality, but the foreign guests should also follow the same rules.

As African leaders such as the Nigerian consular-general speak out against maltreatment and discrimination of Africans in China, commentators have reacted with a mix of patriotism and racism. One typical reaction said:

I don’t want to talk about other things, just take a look at the viral videos circulating online. There are so many foreign trash in China, just expel them all. Let’s be confident in punishing those foreigners who had violated Chinese law. Don’t kneel down. Whenever foreigners are involved, someone would jump out to talk about diplomacy. We have to uphold Chinese law.

Expel those “foreign trash” left behind in China according to law! Expel illegal black people who overstay in Guangzhou or the city will be the first to change its color! A spark can burn. To protect the color of our nation, Guangzhou keeps it up.

A viral video showing a foreigner with dark skin expressing his “love for China” attracted xenophobic comments like this:

You love China? Do you know Chinese history? Chinese culture? Can you suffer with Chinese people in a time of disaster? Can you fight with China against invaders? You love China because it has given you so many favors — because the whites have discriminated against you. If Western countries give you more interest, you would become one of them. You dare say that you love China. Don’t touch our national flag with your dirty hand. This is not the way how we use our flag.

Most Chinese citizens experienced forced isolation for over two months. However, many foreigners — in particular, the African community— are in vulnerable situations as they don’t have permanent residency in China and many have no working visas.

Just a month ago, draft regulation for foreigners to apply for permanent residency in China resulted in a blacklash from online patriots who criticized foreigners for marrying Chinese women and leaving or betraying China during the COVID-19 outbreak.

Chinese online patriots’ rejection of granting citizenship to foreigners contradicts from the argument about foreigners requiring “extra-national treatment.” Instead of addressing the issue of citizenship in a rational manner, very often, Chinese authorities encourage patriotic discourse against foreigners.