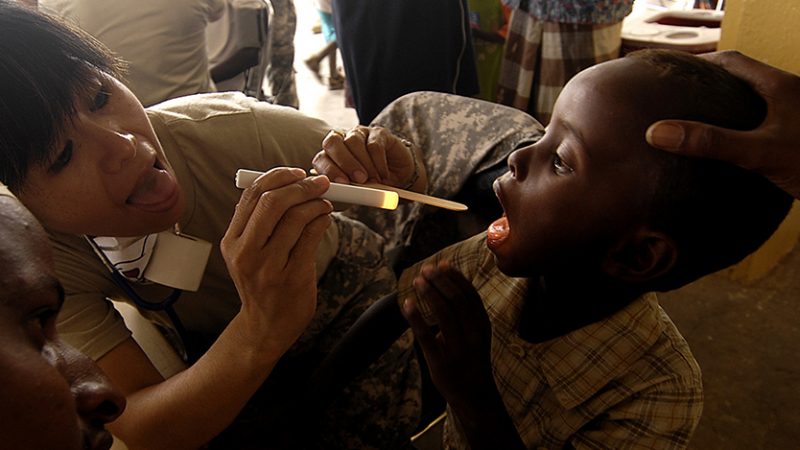 The mad rush by scientists and researchers to test potential treatments for COVID-19 in scientific trials has revived a heated debate over the use of humans in critical drug trials in Africa.

On April 1, two French researchers, Dr. Jean-Paul Mira and Camille Locht, suggested on a live television broadcast that trials of a potential vaccine should first take place in Africa, according to Al Jazeera. Dr. Mira, head of the intensive care unit at Cochin Hospital in Paris, compared the current situation to “certain AIDS studies, where among prostitutes, we try things because we know that they are highly exposed and don't protect themselves.”

The two researchers made these comments in the context of a discussion of trials in Europe and Australia to see if the BCG tuberculosis vaccine could be effective against the novel coronavirus. In Australia, trials are being conducted on at least 4,000 health care workers.

The attitude of these researchers echoes a long, grim history of medical experimentation and exploitation in Africa, where African leaders have colluded with pharmaceutical companies — often based in Europe or the United States — to conduct trials on the most vulnerable people in society.

The researchers’ remarks immediately sparked condemnation and outrage, with the trending hashtag phrase, “Africans are not guinea pigs.”

It is totally inconceivable we keep on cautioning this.
Africa isn’t a testing lab.
I would like to vividly denounce those demeaning, false and most of all deeply racists words.

Helps us save Africa with the current ongoing Covid 19 and flatten the curve. pic.twitter.com/41GIpXaIYv

By April 3, Dr. Mira had apologized for his comments, but only after major pushback and pressure from the France-based anti-racism group SOS Racisme. Dr. Locht’s employer, however, dismissed the outrage on Twitter as “fake news,” saying that the remarks had been taken out of context.

That same week, Congolese virologist Jean-Jacque Muyembe, who worked on the frontlines of the Ebola epidemic in Democratic Republic of Congo, announced that DR Congo “is prepared to take part in testing of any future vaccine against the coronavirus,” according to News 24.

We've been chosen to conduct these tests … The vaccine will be produced in the United States, or in Canada, or in China. We're candidates for doing the testing here.

Once again, the remarks drew ire from Congolese citizens and netizens around the world condemning Dr. Muyembe’s openness to hosting clinical trials in DR Congo, where the rates of infection for COVID-19 are still relatively low.

Within hours, Dr. Muyembe clarified his statements in a video message, confirming that the vaccine would only be trialed in DR Congo after it had been done in countries such as the US and China:

Yesterday Dr Jean-Jacques Muyembe announced that DRC was among Countries where Covid-19 vaccine wld be trialled.
He has now clarified saying ‘vaccine wld only be tried in the DRC after trials in Countries like US & China’ & that he wldnt allow Congolese ppl to be ‘Guinea pigs’ pic.twitter.com/EZ3TLoxs2A

A grim history of medical experiment in Africa

Medical experimentation in Africa — often conducted under the guise of the “greater good” and of finding cures for deadly diseases like meningitis and HIV/AIDS — has sounded ethical and moral alarm bells for years — particularly over informed consent and forced medical procedures.

These trials are often funded by leading health organizations like the World Health Organization, the United States’ Centers for Disease Control and the National Institute of Health.

In Zimbabwe, in the 1990s, over 17,000 HIV-positive women were tested without informed consent in trials for the anti-retroviral drug AZT funded by the CDC, WHO and the NIH.

In the 1990s, the pharmaceutical giant Pfizer tested an experimental drug called Trovan on 200 children in Kano, Nigeria, during an epidemic of bacterial meningitis. Several families filed and won a lawsuit against Pfizer on the basis of violation of informed consent.

Medical experimentation is not only entrenched in the history of racism and colonialism — it also sets a dangerous precedent by eroding the critical trust between citizens and health authorities.

“Both European colonialism and biomedicine reciprocally extended and strengthened the reach of the other,” writes Patrick Malloy in an academic paper entitled, “Research Material and Necromancy: Imagining the Political-Economy of Biomedicine in Colonial Tanganyika.”

From malaria to other “plague-like” conditions, colonial authorities often subjected African subjects to the non-consensual practice of specimen-sample collection and “…African blood was appropriated to feed colonial-era medical research,” Malloy writes. He continues:

In Tanganyika as well as other African colonies, this meant that colonial subjects could be called upon to surrender tissue samples, literally portions of themselves, to the medical authorities.

These practices overlapped with horrifying rumors in East Africa about “gangs” of people employed by Europeans who would kidnap Africans to withdraw their blood to make a gum-like medicine known as mumiani. The Swahili term invokes the image of the “vampire” or “bloodletter” — which has also become synonymous with “exploitation.”

This grim history has sown seeds of deep mistrust in vaccinations, medical trials and experiments in Africa, and continues to haunt decisions made by health authorities working in sync with government officials and global pharmaceutical companies.

That 1990s meningitis trial debacle in Kano, Nigeria, sowed so much distrust that it later made it very difficult to promote critical polio testing. Anti-polio vaccine rumors flourished. Those rumors got disseminated as news and eventually translated into a regional policy banning the polio vaccine in Nigeria in 2003.

So, what does this all mean for potential COVID-19 trials in Africa? Netizens and activists have resoundingly expressed the view that “Africans are not guinea pigs.”

WHO director-general Tedros Adhanom Ghebreyesus has labeled the attitude of the two French doctors a “hangover” from a “colonial mentality” and declared:

Africa can't and won't be a testing ground for any vaccine.

However, deep-seated fear and distrust of medical experimentation has also turned contact tracing and testing to stem the spread of the highly contagious coronavirus into an uphill battle for health care workers.

In Côte d'Ivoire on April 6, protesters burned down a COVID-19 testing center, claiming its location in a crowded area was not appropriate. The attack was “reminiscent of attitudes during Ebola outbreaks in West and Central Africa when some people attacked health workers, suspicious that they were bringing the disease to their communities, rather than offering crucial medical care,” BBC reported.

Yet, in the throes of the 2018 Ebola outbreak in DR Congo, critical human trials administered to Ebola patients “under an ethical framework” — under the medical guidance of Dr. Muyembe and the government of DR Congo — ultimately saved lives. By November 2019, a vaccine had been approved after thousands of Congolese with Ebola were tested.

WHO was expected to declare the DR Congo Ebola-free on April 12, but after more than 50 days without a single case, a 26-year-old man contracted Ebola and died on April 10.

Now, in addition to Ebola and an ongoing humanitarian crisis, DR Congo must turn its attention to mitigating the spread of the coronavirus.

There are currently 62 efforts underway to find a vaccine for COVID-19. Responsible, ethical vaccine trials take time and attention. Will big pharmaceutical companies maintain the same ethical standards in Africa that they usually adhere to in trials conducted in the West?