Ahead of contentious elections, Burundi faces its first COVID-19 cases 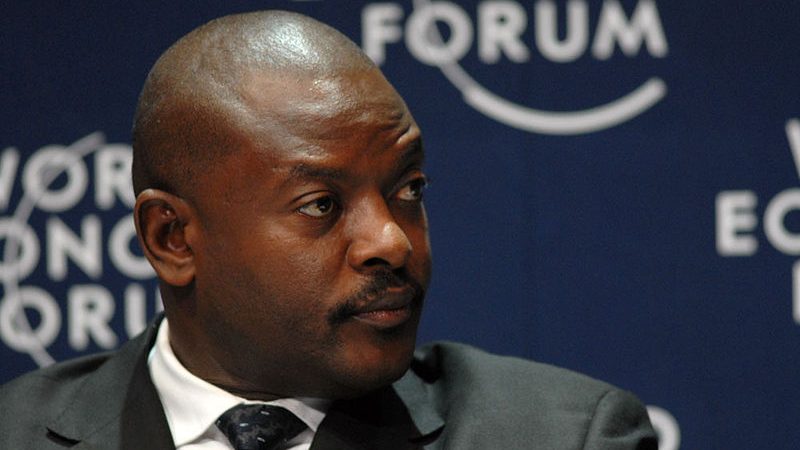 Pierre Nkurunziza, president of Burundi, captured during the opening plenary of the World Economic Forum on Africa 2008 in Cape Town, South Africa, June 4, 2008. Photo by Eric Miller/WEF via CC BY 2.0.

The election in Burundi, set for May 20, 2020, has been surrounded by concerns over security and transparency. After the 2015 election crisis and its ongoing fallout, it was widely welcomed that President Pierre Nkurunziza will not run again. His party named a successor candidate — Évariste Ndayishimiye.

However, the United Nation's Commission of Inquiry on Burundi warned in March that “the risk of atrocities remains serious.” Security services and the ruling party's youth group known as Imbonerakure continue to harass critics and opposition parties — especially the party Congrès national pour la Liberté (CNL). Officials reject these reports.

Journalists are also restricted. One of the last independent media, Iwacu, saw four reporters jailed last year, and recently the paper spoke out against a politician’s violent threats against it.

Now, the COVID-19 pandemic poses another public safety concern. On March 31, the government confirmed its first two positive cases — both Burundian nationals returning from abroad. The Health Ministry said they were doing well in the hospital and the government was tracing their contacts. It reported another case on April 2.

When Burundi had no positive cases, a government spokesperson's communique said their zero-case status was because Burundi is protected by “the grace of God”.

Officials support going ahead with elections.

Before the first cases appeared in Burundi, the government had already restricted travel from affected countries, and most international flights were suspended mid-March. Land travel was also limited, slowing cross-border trade. Some goods vehicles coming from Rwanda were blocked at the border, leading Rwanda to complain.

Temperature testing has also been operating at border points since mid-March:

Here is Gatumba border-post towards DRC. Health measures are in place, doctors are also deployed with temperature testing material. Quarantine is mandatory for travellers wanting to enter Burundi

Officials have encouraged preventative measures such as social distancing and the use of hand-washing points installed in public such as bus stations.

However, after the first cases appeared, officials said no further measures would be immediately taken. On April 8, the health minister said people should continue with daily activities.

As elsewhere, there is debate over whether the measures are enough. Bars and markets stay open and religious and sporting events continue quite normally — like football matches — which many other countries suspended.

Iwacu reported that many people are worried and some were leaving cities for their original villages, raising concerns for possible contagion. Economist Faustin Ndikumana highlighted that the many self-employed would be hit hardest by any future confinement measures, struggling to afford not to work.

To prepare for Coronavirus, the University of Burundi has put hand-washing points in all the campuses and colleges, university restaurants…

On April 4, authorities prevented people with dual Burundian nationality to board a Belgian repatriation flight. Diplomatic relations have been tense since the 2015 crisis was criticized internationally.

Burundi's government has made a point of asserting control  —sometimes apparently arbitrary — over internationally-linked people and institutions. It has restricted media and humanitarian agencies and became the first country to leave the International Criminal Court after it began investigating potential crimes.

On April 8, health minister Thaddée Ndikumana said that 2,936 people had been quarantined so far, with 2,261 already released, after a 14-day state-mandated quarantine. The government diverted individuals with potential exposure to COVID-19 to stay at selected schools and hotels for the two-week period. Police have detained people who attempt to avoid it.

Those in quarantine have complained about overcrowding, a lack of beds, medicine and having to pay costs themselves — raising concerns for increased contamination. Human Rights Watch also highlighted that some humanitarian organizations were denied access to quarantined people.

Refugees — several hundred thousand left after the 2015 crisis — are particularly vulnerable, with crowded camps and poor access to healthcare and food. Cases were reported in the regions of some camps, which have implemented measures such as hand-washing points, but they suffer from underfunding.

Burundi and Tanzania’s governments have been determined to repatriate as many refugees as possible, especially since late 2019. This has continued despite concerns over the pandemic and insecurity, although slower than the authorities hoped.

The UN Refugee Council raised concerns over pressure put on refugees to “voluntarily” return by making living conditions harder. Over 81,000 have returned since 2017, while the UN still registers over 336,000.

Blogger Aimé Rugira raised concerns over malnutrition affecting people’s immune systems during the pandemic. Some are particularly at risk  — such as homeless people and residents of crowded neighborhoods.

Opponents and critics worry that officials minimized risks over COVID-19 to avoid criticism over preparedness and avoid postponing elections — political meetings continue while many other countries have postponed elections.

In 2019, the government avoided declaring a malaria epidemic despite large increases in infections, which the World Health Organization (WHO) said reached epidemic levels. This minimizing undermined an effective response and Human Rights Watch raised concerns it could happen again with the COVID-19 pandemic.

During elections, institutions that show signs of struggle in a crisis may have to pay a price for that perceived weakness at the polls.

The Health Ministry assured sufficient healthcare capacity and published an action plan. Government spokesperson Prosper Ntahogwamiye warned against “manipulating” public opinion by suggesting a lack of supplies or taking measures beyond the government's recommendations. He criticized the closure of a French school and a Belgian school, while others remain open.

Iwacu, however, reported that Burundi has around 50 ventilators for 12 million people.

It said they had received suspected cases for several weeks, and that while centers have testing machines, they lack the reactive element. The Health Ministry responded that only the National Institute of Public Health is equipped for this testing.