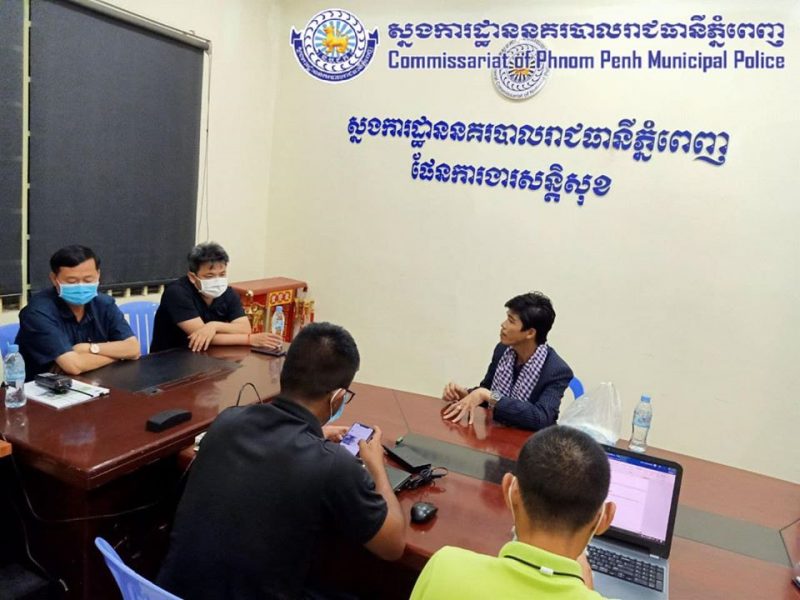 Cambodian journalist Sovann Rithy, wearing a scarf and the only one in the photo without a mask, inside a police office. Source Facebook page of the Phnom Penh Municipal Police

Cambodian journalist Sovann Rithy of the TVFB digital news outlet was arrested on April 7, 2020, for publishing a video report quoting Prime Minister Hun Sen. The report contained Hun Sen’s advice to drivers to sell their motorcycles in order to avoid being bankrupt during the ongoing COVID-19 pandemic since the government has no money to help informal workers. The president made the remark while discussing the economic impact of the COVID-19 measures that the government will implement like movement restrictions and reduced business activities.

But the police said the prime minister was joking which means it should not be repeated to avoid causing public confusion. They arrested Rithy under Articles 494 and 495 of the Criminal Code for “incitement to commit a felony” which includes a prison sentence of six months to two years. The Phnom Penh Municipal Court ordered Rithy to be detained the following day.

Authorities accused Rithy of selecting a sensational quote from the prime minister’s press conference instead of reporting other issues related to COVID-19. But a VOA Khmer report noted that while Hun Sen was joking about telling drivers to sell motorcycles, he repeated the same advice during his talk without laughing.

Aside from arresting Rithy, the Ministry of Information revoked TVFB’s media license.

Nop Vy, executive director of the Cambodian Journalist Alliance, urged authorities to review the charge and instead demand correction in the report if there were inaccuracies.

What is the important point, I think, is that his broadcast did not cause any damage the national interest or any discrimination, so I request the government review this issue again.

On Twitter, Sopheap Chak of the Cambodian Center for Human Rights asked authorities to observe due process in handling the case.

TVFB publisher was arrested & questioned over his report quoting the PM’s speech. While the case is now proceeding to the court, he & his media outlet shall be treated as innocent. Why the license is revoked even before the proceeding? Where the model of presumption of innocence? pic.twitter.com/qWPyn4MgSf

Persecute one journalist to send a message to all journalists in Cambodia. A method long used by Phnom Penh regime during challenging times. Covid19, collapse in tourism, and impact on garment producing sector from global lockdown are challenges the PM can’t arrest his way out of https://t.co/XGwYI8QJrc

Daniel Bastard, the Asia-Pacific head of Reporters Without Borders (RSF), described the case against Rithy as absurd:

Imprisoning a journalist for quoting a statement by the prime minister word for word is more than absurd. The Covid-19 crisis must not be used as pretext for getting rid of journalists who do not blindly toe the government line.

Rithy’s father has already asked forgiveness on behalf of his son and requested the police to drop the case. Cambodia has arrested at least 17 individuals for posting misinformation about COVID-19. But human rights groups said the government is using the crisis to detain critics and members of the opposition.